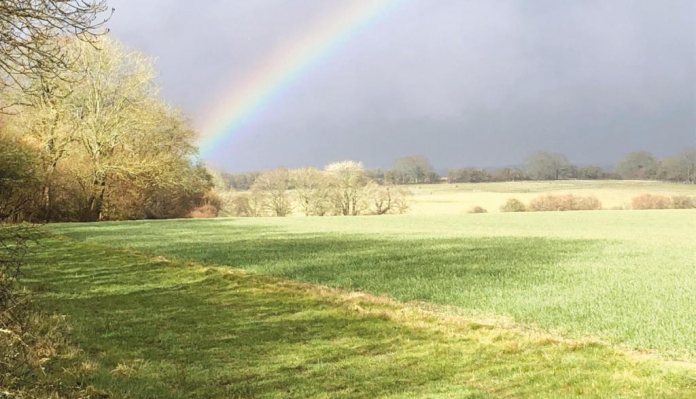 Part of my permission is a pace called Kidney Wood, surrounded by open fields, off to one side of the main block of ground. I have an agreement to shoot it just once a month in the doe season and occasionally over the summer, to ‘keep an eye’ on things, so must make the best of each day there. The landowners really enjoy seeing deer when walking their dogs, but realise too many are detrimental; hence the stalking compromise.

There are two herds of Fallow that regularly use the wood, one more transient and therefore not always present when I stalk. It also holds Roe and Muntjac, but these are not really a consideration here; it’s the Fallow that do most damage, both inside and on the surrounding fields. You can see this by the height of the browse line in the accompanying photos, and the understory, in places, is almost nonexistent. Roe are mostly off the menu, as there just are not that many around anymore.

I do stalk the wood alone, but the best results come when it’s done with another hunter. Even though I’m there only around 8 or 9 times a year, I try to vary my approach and don’t like to stalk the same way consecutively; however, one method is more successful than all others. As you can see from my sketch, there is a glade just over half way through the wood, as approached from the easterly track. I’ve erected two wooden high seats overlooking this, 200m apart.

The obvious thing to do is slowly walk the wood, zig zagging towards the glade where the second rifle in a seat shoots whatever cull deer emerge. Simple! However, it rarely pans out that way and, over the years, many more Fallow have been shot on foot, than from a high seat. Only Roe will stand for long in the open glade, while Muntjac may browse the edge, rarely stopping.

All stalking hinges on the wind! The weather forecast can often be wrong as we all know, but normally they get the wind direction right. So, I discuss on the phone the day before how I plan to do things, which saves time and human chatter on the day. I have two stalkers who know the wood and are safe, so generally one or the other is available during the week when I prefer to stalk. At weekends, there are many more members of the public around, usually walking dogs, even though there are no footpaths remotely nearby, but that’s another story!

The prevailing wind is from the west, which means the approach by truck is usually downwind. Both my friends prefer to stalk rather than sit, so I take the highseat. That’s fine with me, they are helping, and I have plenty of opportunity to be on foot elsewhere.

Starting off at first light, one route is to walk 100m out in the field to the north, parallel with the wood, glassing every 15 or 20m. I have taken deer from here, Fallow are often just inside the wood edge. Happily, the ground rises towards the centre east to west, so a shot into the wood will not carry on through. I’ll then come in to the northerly seat, checking the glade as I approach. By this time, the walking stalker will have glassed the fields to the south, which can have Fallow out feeding on the grass, and entered the wood from the east.

They will slowly stalk this easterly section, and I’ll usually hear a shot as a Fallow doe goes down.

For anyone who has never hosted another stalker, let me tell you, the sound of a nearby shot is very welcome indeed. Their time invested in your plan and ground is realised and, no matter what happens after, the mood will have lightened, even though there will have been no prior promise of a shot.

Sometimes, the herd will then cross the glade in front of me slowly enough for a shot, but generally will either run to the western part of the wood without pause, or out in the northerly field, bunched together. I can get a shot off while they are in the open from the side of the seat. As they cannot see where it’s from; occasionally, they will then return to the wood and another opportunity presents itself either to the walking rifle, or myself if they are close to the highseat.

This only happens near the beginning of the doe season, before they wise up; come February, Fallow will leave the area altogether at the first or second shot. As the walking stalker approaches the glade, they will text me. Safety first of course, but also to let me know a deer may jump up at the last moment from the bramble around the glade edge. They will then stalk the SW inside edge of the remaining wood, as the field adjoining isn’t ours. The hope is to push any deer north, for a possible shot further onto our ground. The wood here is more open, with fewer ferns but numerous fallen trees that Muntjac like to hide under.

We tend to ignore these small deer the first time around the wood, concentrating on Fallow. Muntjac don’t move far if left undisturbed; so, when the western area has been stalked, we will walk the wood in parallel, back towards the truck, from one end to the other, separated by the ‘hump’ in the middle. This will often produce a couple of Munties and is an opportunity to see if any Fallow have doubled back into the wood.

We then pick up the carcasses in the truck, being sure not to leave ruts as we go. All gralloch is bagged and taken away.

This happens in a period between dawn and about midday. We go off for lunch, then the larder, returning some 90 minutes before dark; some of those displaced Fallow are desperate to return for the night, and they pay the price as we wait inside the wood, looking out across our fields.

When the wind is from the east, we can reverse things, but anything other than a westerly seems to unsettle the deer, as they become unpredictable and very flighty. We have tried stalking from each end, meeting at the glade, for example, or together in parallel from east to west, but no method is as successful as using a walking gun with a highseat. I’m of the opinion that it’s best to wait for the right wind to stalk this wood, rather than pick a day and see what the weather brings, if possible. Then there is a month between stalks, which is enough time to let the deer settle down, allowing the landowner to enjoy his wood, too.