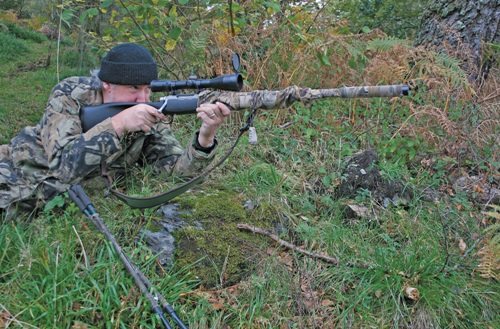 The thrill of stalking Roe Bucks in the summer is hard to beat but is in fact the vital role of managing the female population in the winter still has its memorable moments. Doe`s may not carry the same appeal of a Roe buck but they are no less important , they hold the key to a mature and stable deer population and bring forth the bucks of the future, remember!

Therefore doe management should be just that, management, done with sensitivity and a keen well trained eye. A blanket policy on numbers without selection can be nothing but detrimental to the overall population, so time spent in the woods can give a good indication on numbers, health of individuals and an estimate on the numbers to harvest.

Observation, stealth and patience is the name of the game, it is far better to sit and watch and then shoot the right beast than blunder in and shoot the first doe to emerge. It`s hard as most deer managers have large numbers of deer to control in a limited time period and with pressures from employers so it’s easier said than done.

Watching from afar will pay dividends in the long run, especially if you have access to some night vision or thermal imaging observation equipment. Here you can sit back down wind unobserved and quietly count deer numbers without spooking the resident population. Because it recognises a thermal image i.e. heat given off by an animal you can see deer walking or sitting in woodland where normal observation is impossible.

Unless you have a large estate or farm with good acreage it is more than likely that your legal boundaries will not coincide with that of the Roe population. That’s fine if you stalk on the neighbouring land but poses a problem if you need to tackle the doe population.

If they are visiting deer feeding on your patch and you over cull and you have no resident deer, then you have made a big mistake. Conversely if you over cull your resident deer and it’s a fertile landscape you will cause a void that neighbouring deer will want to populate and you could exacerbate the problem with more deer than you started with!

Never underestimate the simple reverse psychology tactics, in this I mean we all know deer will take flight at human scent wafting through the woods if they feel threatened. I use this to my advantage. Deer tend to bed in areas they feel safe and usually are off the normal human walks, if not they will sit with the wind drifting scent to their back and rely on their eye sight for movement to detect anything in front. If you walk into the wind i.e. straight at them, the Roe will leave sharpish away from you into the wind but because this was a favoured bedding area that usually is not approached by a human the Roe will almost certainly do a big circle to get down wind of you to positively identify the intrusion and more often than not come back to the same spot when the danger has past. It can work now and then, too much and they get wise, but it’s a good way of seeing the numbers of deer in a wood by purposely gently spooking them and count them from a distance, downwind as they migrate back.

In Surrey where I also stalk on the chalk down lands there are impenetrable thickets of brambles the Roe love in winter as a food source, I always hunt the brambles for Doe this time of year; food and good shelterand a bit of luck will be rewarded to a careful stalker. Other chalk escarpments and Roe will often bed in the numerous gulley’s and small corries formed in the chalk especially among the Buddleia and Brambles again. A few chalk clumps rolled into these thickets can reveal some hidden treasure in the form of Roe more times than I can remember. I do not consider it very sporting but for counting purposes its fine.

Winter time also sees a drop in the mineral intake of Roe and it can be good time to try some of the attractants/ supplement diets or salt licks available. I have had mixed results with these but winter time is certainly more productive for spotting deer using them. BushWear carry a really good supply and I have used the Aniseed and Molasses Tar to success but it’s not a miracle stalking technique though.

THE PROOF OF THE PUDDING

Putting it all together can be very satisfying but until you reach your bit of ground it is always tricky to know exactly what’s going to work, which to me is half the fun. In Scotland I use just the same tactics as in Surrey or Sussex except I have more wet weather kit!

One area I stalk has the rolling hills merging with the loch side via fingers of rock that form ridges that the deer love to sit, bed, feed and watch you from. They are heavily wooded with Birch primarily and offer excellent shelter for the roe deer during the winter as they do not have to move too much to feed throughout the day, only breaking cover at night to feed.

Only problem is the wind direction is usually south westerly’s that blow right towards the ridges and going round the back is not possible so extreme stealth is needed.

This is where the ‘wind them first and let them return’ scenario can work very well, however I like a challenge and tend to stalk in using every bit of foliage and depleted fauna I can. There are certain Roe and Red racks they use often to frequent their bedding areas and primary feeding sites so positioning yourselves along one of these can be good, unless a buck walks down it first in Doe season that is and spots you!

As I reached the first Birch tree from a slow crouched walk across the five acre field and a slow sweep with the Zeiss bino`s revealed no bedded deer on this side of the ridge but fresh slots running in front of me indicated I had disturbed at least two Roe.

Usually that’s game over but with these deer temporarily vacating the ridge I crawled to the top where I had a view in between the birch for 65 yards and could see down at least one side. The wind was just touching my left cheek as I sat with my back to a tree stump that would hide my silhouette on the ridge and I waited for the roe to slowly make their way back.

My trusty 30-47L Predator rifle was cradled in my lap loaded with my reload of 38-grains of RL 10X and a Sierra 125-grain Pro Hunter bullet with 2146 ft/lbs energy, a proven deer round up to Red stags. My day dream was instantly stopped mid way as a faint movement caught my peripheral vision and that sense that something in the surroundings had changed. A mature doe was slowly threading its way between the old birch tress nibbling at foliage as she went.

Being after Christmas surely pregnant from delayed implantation so, really best left, I was after a young… Before I could finish my mental sentence a young doe and trailing small button buck, last year’s offspring bounced a few steps to keep up with the matriarch.

Despite the young doe being in good condition she was right to cull and at only 30 yards I had to really slowly raise the rifle and settle the excellent Zeiss 7x50T scopes reticule on her neck, just below the joint. A dull thud from the sound moderator and she dropped instantly and the only noise was the remaining roe barking in alarm.

In these situations I usually quickly vacate the area and deal with the gralloch away from the Roes more private bedding areas.

This is just a guide to what I find works but do not forget as the winter crops grow Roe congregate more on the fields in groups before the bucks re-establish their territories in the spring so quiet early morning observation is very worthwhile. I have also used to good advantage calls to entice spooked or inquisitive younger Roe to me or to reveal themselves for assessment.

Trail cameras that capture images 24 hours a day can be a big bonus in determining a well used or infertile deer area and can save a professional stalker on a big estate many hours sitting and waiting in the wrong spot, we have all done it.

Short days are sometimes very handy as human hassled deer have longer hours to feed at night under cover of darkness, so moonlight nights can be very illuminating to any stalker for observations into size and numbers of Roe. Bucks are great sport but some of those older Does are every bit if not more alert as they have themselves and their young to care for, so offer very challenging stalking all year round.