Hunting Story: North of The Wall 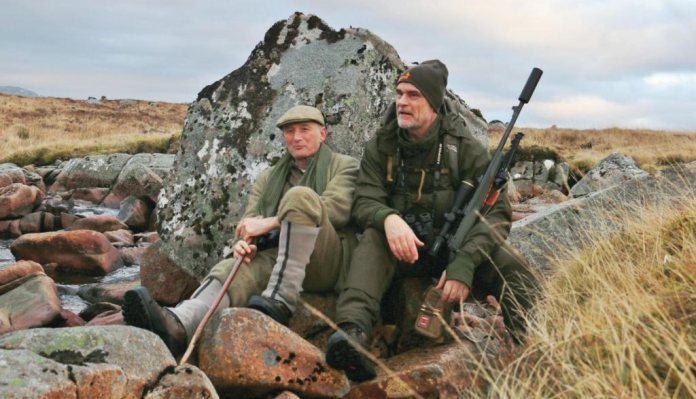 Completely exhausted, I follow my partner Michael and our guide Timothy onto the next hill. It’s already the third one that day and it does not seem to want to end. Whenever I think, finally, we have reached the top, the next summit is already emerging. It is not just the slope that makes my legs heavy, as we are blown by an icy, stormy wind and the ground is anything but easy to traverse. Sometimes it is frozen and slippery, others it is swampy and I sink to the ankles or stumble over the countless grass tussocks. Why do I do this at all, becuase it’s what hunting is all about?

I often have to listen to the story of a pheasant hunt in the countryside that Michael was invited to by a friendly hunter, and is always enthusiastic about this journey. Perfectly organised hunting, proper gun dogs and all this in front of a picturesque backdrop. Unfortunately, it was not in the Highlands, but the southern part of your country, which was also enchanting. This quickly made it clear which destination was still on our list; the Scottish Highlands. Since we are always on the lookout for a special adventure, it should not be a typical deer hunt for the rut, but a proper stalk in the middle of winter. The whole thing with as much snow and ice as possible; great idea, love it!

The right estate is found quickly. The Brae Roy Lodge is just a few miles south of the most famous hole in Europe. Who does not know her, the still living story of the sea monster Nessie? In order to get to your country there are countless possibilities. Flying, tunnel or ferries are available. We choose the boat over the Channel from Dunkirk to Dover. Unfortunately, we arrived in the middle of the night and so we do not get to see the famous white cliffs. Instead, we notice in a few minutes that here in England it‘s much different. You drive on the wrong side of the road, kilometers are miles, the clock wants to be put back an hour, and next to Harry Potter there is also a queen!

900 kilometers, in addition to countless roundabouts, are still ahead of us and so we decide to stay in a resting place in our Land Rover Defender with a camping cab on the back. Surprised, we find the next morning that parking costs more than two hours, charged aprox €20 and pay before continuing. We are rewarded for our efforts and about 10-hours latter we reach the Scottish Highlands. “I have never been more solitary,” wrote the German writer Theodor Fontane on his journey through the Highlands. Without knowing where he was still going, we believe him.

Unfortunately, it was not snowy, so we look into green valleys and on countless hills, which are scattered like sugar hats. On the only driveway into the area, we cross some creaking wooden bridges and have to be careful not to get any sheep under the wheels. The route ends at a farm entrance of a large estate and we have reached our destination: the Brae Roy Lodge. We are already expecting it and it is just as Michael described it. The ghillies were wearing the traditional hunting tweeds, with plus-fours, leggings, necktie, self-made walking stick and deerstalker cap, which we know from the Sherlock Holmes films.

It does not look silly or old-fashioned, it simply fits into this scenery and bears witness to the tradition awareness of hunting in Scotland. After a warm welcome, we sort our kit out, so straight on to a metal stag at 100 yards for a check zero. In Germany, Michael installed the CDS (Custom Dial System) on a Leupold VX 6 scope. A ballistic turret dedicated for the Savage Hog Hunter rifle he is using and Hornady 30-06 Springfield, 178-grain Precision Hunter ammunition. Let’s see how it will prove itself on this hunt. The Savge is moderated and as expected the shot hits on the zero point on the steel, so we are ready!

Climbing into an Argocat 8-wheel ATV, we drive to the hunting area. While Timothy the Ghillie and Michael take the front seat, I squat behind on the loading area to start filming. 30 minutes later, we are deeper into the hunting area and I see my first Highland red deer! They already saw us and were heading up a slope, so we stop and dismount. Now it’s time to lace up boots backpack on the hump and the game starts. From this distance, those green, gentle hills look so harmless, but during the ascent, I slowly become aware of what I was getting into!

There are no paths here, so we simply stalk cross-country against the wind and it has to be done today. There are no gusts, it is a constant storm, which nearly kills me. Not to rush here is no easy task, but every step needs to be thought out. To fall into one of the many ravines would be a quick end to our journey. Although it is bitter cold, sweat runs down my spine. We continue like this for four hours and I just want to take a break under a rock, when suddenly a deer comes in sight. All the pain and exhaustion is forgotten and it’s time to get our game faces on!

He’s an old animal and about 500m away in a small hollow. Timothy speaks of it as very old and no longer a leader; and a perfect chance! But, as always, there’s a catch; between him and us there’s absolutely no cover and also the wind is constantly changing. The only way to get closer would be the riverbed, which is behind and below us. I would love to film from here but we have to all go together, so instead of the well-earned break, it is first downhill to the river. We do not have to worry about being quiet, as a roaring waterfall covers all the noises.

Walking in the riverbed is not an alternative, the water is too fast. So we change the sides of the river again and again. The stones on which we are balancing are slippery and the grass clumps to which we cling barely stop. It takes almost an hour before we are close enough to take a look over the edge of the canyon. Only in this way can we see if the animal is still there.

Slowly, Timothy pushes his thumb up; the deer is still there! From this position, however, it is not possible to shoot. To the question of our guide, whether Michael would be a stalking alone, he nods only with the head. On all fours, he crawls through the wet heather, face to the ground, pushing the gun before him, he approaches meter by meter. I can only guess how difficult this must be. Wet moss, pointed stones and heather do not make it pleasant. My knees and back are already aching from just watching. I too was close to the cold ground, and I hardly dare to breathe. It is no longer the distance but rather a favorable angle, which is missing. I can watch the procedure only from the cover carefully but apparently a shot was now possible.

Through the binoculars, I see how the Savage kicks as it fires and hear the meat slap as the bullet strikes the animal. He is clearly hit, but does not go down. What happened? No time to think about it because already another shot breaks the silence and I see how the drama plays out. We wait five minutes before we start searching for the animal, if it was a killing shot that will give him enough time to lay down and die.

It’s like being bewitched, trying to find a red deer between all these troughs, ditches and holes sounds easier than it is. Everything suddenly looks the same and you have to pay attention not to lose the orientation. We almost despair when we finally find the coveted prey. The first shot connected, but it was the second that finished the business! We explain our German traditions to Timothy, and they are a part of the piece and he is enthusiastic about our respect for the creature. A great compliment from a deerstalker of his class, we cut four pieces of red deer. This experience will probably be remembered forever, even if I have come to my limits on this tour many times, I still cherish the challenge and adventure offered.