Hunting Story: Play Misty for Me 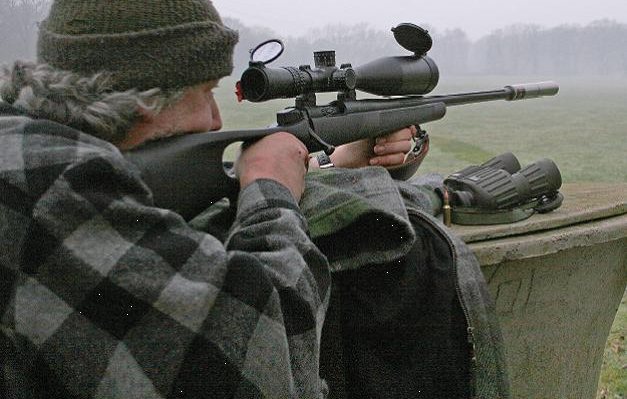 Fallow are gregarious and feed in groups, so they can be harder to stalk than Roe that I am used too. High seats are one of the better methods and positioning them on well-used rides or woodland edges is most productive. Ambushing them as they return or go out to feed from the safety of the woodland bedding areas can often be the only way to get a decent shot.

By the end of October/November, it is always a good time to be in the woods, the days are shortening and the air is becoming crisp and your breath hangs in the air with the woods starting to echo with the groaning of rutting Fallow bucks.

I like to foot stalk, which is not always the most profitable technique but I enjoy the challenge. Fallow are also often better tackled with a partner, in this way you can access two avenues of woodland or field strips, working together. In this way you can gently move deer to one another, as you parallel stalk for safety reasons. Alternatively, one stalker takes a stationary position and the other walks the wood, allowing the deer to sneak out past you, hopefully!

More often than not, the deer rumble you, especially if it has been tried before and they will leave. Either unnoticed, with only their vacated beds as evidence, or via an escape track unknown to you. But to me that’s the way it should be, the quarry should always be afforded respect and stalked with a fair chase policy!

A rather odd technique that sometimes works is ‘rattling up bucks’. It’s an American tactic for their native Whitetail deer that also works on most species. Essentially you are trying to imitate two bucks or stags fighting each other, either over territory or females! In this way, you want to provoke a reaction.

Bucks can be quite inquisitive at the noise and simply come and see what it is. To achieve the desired sounds there are several ways, the most realistic is to use shed antlers, although there are also several devices that do the same job.

Shed antlers are authentic and will achieve all the variations of clashing noises you require. They do not need to be a matched pair, or even the same species, so long as there is enough length to intertwine the two and bash against protruding tines. This produces the clashing, binding, grinding and rattling noises all associated with two bucks battling over a territory or does.

I also use a Rattle Box I bought in America that has a plastic paddle that rattled in a plastic hollow container mimicking the same sound. Best to start somewhere down wind, with good vision in front and to the sides, so that you have good sight lines to see any sneaking deer approaching. I usually sit with my back against a tree, so as not to silhouette myself. Movement then is more disguised, I lay my rifle on my lap, safety on, so leaving my hands free for binos and antler rattling duties.

Start quietly, trying to mimic a couple of young bucks sparring to get the attention of a bigger male, who will think they are trespassing on his patch. Twist and grind the antlers together, it’s amazing how the sound carries through the woods. Do not over do it, just like calling Roe; less is definitely more!

As with most stalking, the best kit is the stuff you are familiar with and hopefully shoot well, it’s more about field craft and patience with Fallow than the latest gear.

Calibre-wise I have used anything from a 6mm PPC, .243, .6.5x55mm or .308, all are absolutely fine! In fact, it’s rarely the cartridge that makes the difference but the bullet-style, design and weight that really counts and also your ability to deliver it in the right place!

A good all-rounder is the 6.5x47 Lapua with the new Sierra 130-grain Game King bullet, which is both accurate and reliable for Fallow or Reds. Equally, Hornady’s Superformance .308, 150-grain SST factory load, which is a good option for nonreloaders.

With the .243 Win, bullets around the 70-80-grain weight always seem to perform better than the heavier 100-grainers in my experience.

Fallow in large groups have far more pairs of eyes looking out for danger and although I rarely use camouflage, I certainly would not rule it out! But I always wear gloves and bring a scarf up over my nose to shield the face and pull my woolly hat down tightly to minimise skin tone shining out in the woods. Whatever you choose, it must be quiet and rustle free, which is why I still favour my old wool Swanndris or Bush Wear clothing, which negates noise and importantly wind also and is highly water resistant.

Binoculars are really important and whereas I like the larger types of 10x Mag and 50-56mm objectives, for Fallow in the woods compacts make a lot of sense! 8x32mm is a nice size in a quality brand; try Zeiss, Swarovski, Leica or Kahles, you cannot go wrong!

Less obvious items are the ever popular Trail Cameras, Stealth Cams, Bushnell’s and my favourite SpyPoint from Thomas Jacks placed at crossing zones or well used deer tracks, next to funnel areas where two deer fences converge are good sites. Data and images can save you a lot of time sitting in the wrong place with day and night time movements of all species of quarry quantified on an easily removable data stick.

I get asked a lot if deer attractants work and I have to say I have mixed views, these are artificial substances or natural chemicals that are applied as gel, paste or aerosol spray to trees, limbs, foliage or mock scrapes to attract deer to that location. They are cheap and well worth a try, I find the Aniseed spray quite good but actually more as a human scent-masking tool, as I spray it often to my boots.

Autumn, when a chill hangs in the air, makes me feel alive and connected to your environment. On this late morning stalk daylight was at 7.00 am but I had been up since 3.00 am to drive to a beautiful location among the rolling Sussex Downs and woodlands. You have to get up very early and be in position well before first light, as the Fallow on this particular farm are virtually nocturnal. I bought my trusty 6mm PPC that shoots flat and accurate, which is a boon here, as the fields are large and long shots sometimes have to be taken if safe and also the Farmer insists on head or neck shots only, no pressure then!

Today the mist was dense, which is both good and bad, as I could sneak in downwind under its cover but equally the Fallow are often twitchy in these conditions and their senses are heightened. We worked in pairs this morning, applying the tactics described above, although I did have my rattling antlers in the roe sack just in case.

Bump In The Woods

There was a large woodland block beyond our boundary, which is where the Fallow emerge and retreat after feeding. Julian walked slowly through the woods to his position that would also hopefully ‘bump’ any stragglers to me, whilst I positioned myself behind a large concrete trough with a 180° safe arc across the field in front of me. I heard a muted thud from Julian’s MAE silenced 6.5x47L rifle, so one success and I braced myself for deer to emerge but not a jot. In fact, I could only see 80 yards across a 750 yard wide field, so even if they were there I could not see them!

With every passing minute the fog lifted just that bit more, and bingo, 165 yards in front of me a group of twelve Fallow. I could make out four young prickets and the rest a mixture of does and fawns. A bit too far for a neck shot although the 6mm PPC is more than capable, so I waited as they slowly eased their way towards me, they were looking back in Julian’s direction, so the tactics had worked. At just under 100 yards I felt confident and positioned the Night Force’s reticule on the lead fallow’s neck as it paused; the Jewell trigger broke and a fresh pricket lay on the heavy dew field. The rest of the group bolted but we had two.

It’s odd that Red and Roe are considered the desirable deer species, whereas Fallow are more seen as just agricultural and forestry pests. They are magnificent beasts with real charm and impressive antlers if allowed to grow and managed properly! They can be incredibly frustrating to stalk, which is the main attraction and why I will drive a long way to do so!