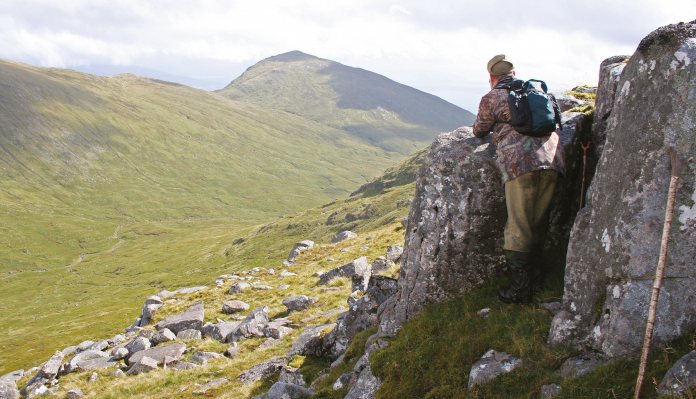 All my stag stalking has over the years been primarily through rolling hills and dense forestry plantations that necessitate a long walk in and then carefully slow stalking through the timber or static positions looking down rides or logging tracks. The alternative has been in Sutherland where there are very few trees and you can walk miles, literally across hills covered in heather but the approach in my area was always a gentle gradient.

I was recalling a completely different experience to a friend the other day which reminded how difficult and thrilling a stag stalk can be, if you have the legs for it. Truth be told my old knees after 30 years trudging across bogs and up hills are feeling the pressure a little these days, poor old chap.

This memorable stalk involved a two mile slog to a summit ridge at an elevation above 2500 feet with a professional stalker in Argyll. I normally hunt alone and on private land, but I wanted to try a traditional stalk on reds with a professional ghillie, so I contacted The Pierhouse Hotel at Port Appin Argyll on the shores of Loch Linnhe, run by the proprietors Nick and Nikki Horne. As well as an excellent sea food restaurant they can arrange excellent opportunities for sporting and deer stalking on neighbouring estates. He’s an interesting man, being the former organiser for the Camel Trophy events across the world and so has an innate love of the outdoors and whose brother runs www.gunsonpegs.com.

Nick had arranged a day’s stalking with Kurt Larson, an ex mining engineer. To get to the estate from Appin you need a boat crossing of some six miles across the loch to wildness. As I waited on the Pier House jetty I looked out across the water, which was whipped up by the usual gusting wind and rain, as a small white boat seemed to be tossed around by the waves. I was greeted by a broad smile of Kurt Larson as I embarked with rifle and binoculars.

As we bobbed along, it seemed we were air borne more than touching water! We chatted as we headed for the Morvern Peninsula. There are two Corbett Mountains on the estate, so over 2500 feet and yes most of the stalking is vertical with long walks in. This was going to be hard work and not for the faint hearted, oh hell!

Kurt knows every inch of the estate, with 50 stags shot a year and twice as many hinds/calves. This is red deer country, with any Sika ousted straight away to stop hybridisation and only the odd roe, which they leave to build up the population. There is little forestry, just odd blocks here and there, it’s primarily open hill and blanketed with magnificent heathers.

AIR AMBULANCE ANY ONE?

We soon docked on the estate’s private jetty and was met by Kurt’s head stalker Michael Skelly who was from Ulster originally and has been a grouse keeper most of his life, so I was in safe hands. As is customary before the stalk a rifle test is mandatory and 3-shots from my Steve Bowers custom 30-47L rifle putting all 125-grain Nosler Ballistic Tip bullets into the centre of the steel plate at 100 yards. If you like, two estate rifles, Tikka T3s in .308 Win topped off with Zeiss Duralyt scopes are available on request.

Next we drove up the forestry tracks viewing the glens and corries as we went. The first was Corrie Ghardail, a broad sweeping glen surrounded by interlocking peaks and looked like a gigantic cauldron. Sure enough, a group of reds were feeding contently on its slopes but the wind as it was would give away our approach. Kurt suggested we park up and stalk down wind into the stags, this time with the wind on our right side. It would mean a long two mile walk in, “no worries” I said, oh how those words would come back to haunt me!

We stalked the march between the neighbouring Laudale Estate. As we climbed higher, the grandeur of Kurt’s land emerged, with views down to Strontian village where the element strontium was discovered and barite was mined until the 1990`s. The weather waned between bright sun then downpours but it did not dampen the atmosphere as Kurt explained Kingairloch is a proud member of the Morvern Deer Management group, setting culling levels for over 15 years with accurate census work.

I usually stalk alone and so to me having stalkers like Kurt and Michael pointing out flora and fauna along the way really enhances the experience and greatly brings to life the area. However, the slog in was getting steeper and my hill legs had left me, so frequent stops were needed, Kurt graciously explained “it’s no problem, we are all here to enjoy the day”, which was welcome but I did feel a bit of a Southern Jessie!

This thought was banished from my mind as Michael, leading the group, stopped and dropped to his knees with a hand gesture to indicate a group of red to our right. Sure enough a small crawl to a granite out crop revealed eight or so reds bedded down and chewing the cud, totally unaware of our presence. I pinged the range with the new Leica 1600 B range finder, 406 yards. We observed for 10 minutes Kurt and Michael assessing the beasts and although two were suitable to be shot the dead ground in front was too great to overcome and we would be spotted straight away. So we back tracked and headed ever upward. I huffed and puffed, Michael joking his finger was on the speed dial of his mobile phone for the Air Ambulance!

Just as we came over yet another granite crag, Michael pointed skyward and two circling Ravens were a good omen. They had spotted us from above and knew that a free gralloch meal was on the cards if we shot a beast, so was a good sign some stags were nearby.

We inched our way to the top of Glas Bheinn and the gods must have been watching, as the sun broke through the clouds and bathed the hillside with light. We were literally perched on the edge of the cauldron, looking down into Corrie Ghardail.

Kurt spotted a group of over 120 red on the far slope, out of range but a spectacular sight of wild free deer and Michael kept scanning the eye straining outcrops for signs of life. A tap on shoulder from Kurt and a reconfirmation from Michael and a single immature beast was feeding ahead of us.

Perfect cull animal and so Michael automatically slid down through the granite boulders, slowly indicating me to follow until a near perfect plinth was found as a rifle rest.

Just as we watched a more mature stag, eight points with velvet in tatters emerged from behind the granite rock where the youngster was feeding. Kurt wanted this taken, so I waited until he turned broadside, the Leica 1600 B indicated a range of 141 yards and I lined up the new Zeiss HT 3-12x56mm scopes reticule for a heart lung shot with an adjustment of 2.0 inches for the stiff breeze.

The 125-grain Nosler struck its mark and the beast collapsed instantly, in fact Kurt remarked that he had thought I had neck shot it as it dropped so quickly, it’s a good round the 30-47L!

Handshakes and broad smiles concluded a fantastic stalk and my legs felt instantly rejuvenated, now the work began! Kurt had to walk back to the pickup and arrange the estates Argo cat to meet us down the valley, whilst Michael performed the gralloch and assessed the beast. Now Michael had to drag the stag out, it was steep, very steep and gravity helped a lot but my god these stalkers are tough. A quick rope tie around the antlers and Michael literally galloped across the glen with me struggling to keep up despite him dragging a stag!

The lovely sound of the Argo cat greeted us and the stag was winched into its loading bay and Bobbie the driver, 16 years on the estate, drove me to the larder, whilst Michael opted to walk back. He nearly beat us too! The scales read 173 lbs which is small by Kingairloch standards as a 245lbs stag shot last week was seen hanging in the purpose built estate larder.

All venison is processed on site and then supplies the estate’s own restaurant ‘The Boat House’ on the shores of Loch a`Choire and also supply other shops and restaurants including The Pierhouse and even mail order through “Really Wild Venison”. The little white boat was waiting for my return journey to the Pier House with a fine trophy of the day, some great memories and pictures and most of all utter respect for highland stalkers, who are built like mountain goats. Michael and Kurt had to do it all again the following day, I had the luxury of a day off and long sleep!