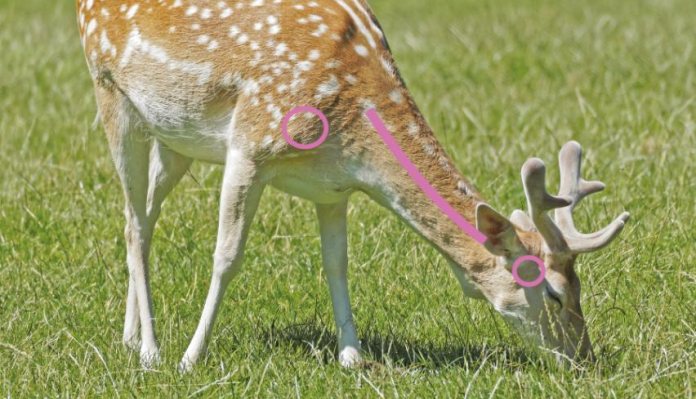 Along with rifle calibers and knives, shot placement seems to take up an inordinate amount of column inches in the press and online debates. Should one take neck or head over heart/lung shots? Over what distance is it OK to aim at the neck and is less meat damage a good enough reason? With a little forward planning, it’s not difficult come up with a sensible framework from which to base your deer shooting on.

A body shot has a good 6” circle in which to aim on Roe, larger for Fallow, centered around the heart/lung area, but a head/neck leaves little room for error, perhaps under a 2”. This alone points to the body shot as the reliable option, but how far is too far?

A good place to start would be with a rifle capable of reasonable accuracy, that shoots a 1”/1MOA at 100 yds at the bench. This easily doubles to 2” in the field for numerous reasons; shooting off sticks, cold hands, buck fever, tired, less than favorable light, variable wind etc. It follows that the 6” circle on a Roe could be hit at 300 yds; 2 MOA at 300 yds = 6”, given the right elevation. That 2” circle with 2 MOA limits a stalker to 100 yds when head/ neck shooting. These are real world figures and, to me, represent the maximum distances to shoot at live quarry given ideal conditions.

My own approach is simple but practical, based on a few premises. I will head/neck shoot to about an 80m distance, given certain criteria.

I’ve taken side on, head on neck shots and shots to the back of the head; all are effective, giving instant kills, but a slight misplacement with a side on shot can end up in the jaw, or low taking out the esophagus. A long and unpleasant death can result, and all efforts need to be employed to catch up with the animal. This is the type of shot most described by those advocating only body shots.

The importance of collapsing blood pressure

At anything over 80m, I’ll aim for a high heart shot, i.e. 1/3 up the body in line with the rear of the front leg. Why a high heart shot specifically? This will destroy the major blood vessels coming into (superior vena cava, pulmonary vein) and from (aorta, pulmonary artery) the heart, causing an immediate collapse of blood pressure, meaning the deer will more than likely drop and die within a few metres. A shot which destroys just the heart muscle itself will certainly cause death. But there are valves between the main heart muscles, the ventricles and arteries, which will maintain the blood pressure for a little longer, meaning the deer may run quite some distance before expiring. I have shot Fallow that have run some 90m after a low heart shot. No doubt clinically dead, but potentially hard to find.

A lung shot, about midway up a broadside deer in line with the front leg is effective, but bullet choice is key. Remembering the lungs are kept expanded in the thoracic cavity by a vacuum, a very frangible bullet may cause a large entry wound and enter a little way inside the body, collapsing one lung. The other will still be viable, so the deer runs off, no doubt to shortly die, but you must find it! Better is a bullet that expands reliably and passes through both lungs and exits. With a decent hole in and out, both lungs collapse, causing rapid death. Blood at the scene will be bright red and frothy, having been just oxygenated in the lungs.

Forward of a heart/lung is a shoulder shot. With a suitably powerful round and again a controlled expanding bullet, both shoulders will be broken, if the deer is broadside on. It will not move far and by disrupting the major blood vessels in between, a good kill should result. There may be a large amount of meat loss with this shot however, which is why I and many others prefer a high heart shot, all things being equal. Shoulder shots are often promoted in Africa, where you want to anchor your animal in large expanses of open land and meat loss isn’t so much of a concern.

A high shot placement above the shoulders or lungs can result in a spine shot. The animal will be down immediately without moving off, but not dead. After such a shot, the stalker needs to ensure the deer is dispatched quickly with (preferably) another shot or with a knife inserted at the jugular furrow at the base of the neck, the knife being directed back towards the entrance of the chest to sever the major blood vessels - the aorta running to the head, for example. Not advisable when dealing with a large buck or a deer not hugely disabled at the front end by the shot, as a flailing head may be dangerous to the stalker with knife in hand.

A shot further back from the heart will encounter the liver or stomach (rumen). The liver shot deer will hunch and move off without much, if any, blood being lost. What blood is found will be dark red. With a good expanding bullet, the liver will be badly damaged, and the animal will bleed out internally nearby as the liver stores some 10% of the blood volume and has a lot of blood passing through it from the portal vein and hepatic artery. Without a blood trail, such a shot deer may take some finding if it moves far.

The gut shot deer will also hunch up and run off stiff legged. Gut content and light coloured belly hair more than blood may be at the site and presents a problem. Each scenario is different, but generally I would not look for this animal straight off. Left to rest up for a few hours or overnight if shot at last light, the deer may not want to rise and move off when found, and thus present a chance of another shot when quietly approached.

Wayward shots do happen, and broken legs can result from a low strike. Just a little blood and some bone splinters may be at the site. Often such a shot deer will run off, covering the first 20m or so full of adrenaline such that the broken limb may not be noticeable to the stalker. Thereafter, the gait will indicate a problem, if the deer is still in sight. This sort of wounded deer may be the hardest to find; the animal can travel a long way, as the injury isn’t immediately life threatening, and maybe over a boundary where the stalker has no permission. Again, leaving well alone and a careful approach with the possible boundary to your back later may be the best method, perhaps without a dog unless steady at heel. The deer may stand when encountered but be loath to move off. The stalker must be ready for a quick but safe shot, or the moment will be lost.

If not broadside on, the stalker needs to know the internal arrangement of the organs to best place a bullet. A deer facing 10 O’clock away from the rifle needs to be precisely shot, if no other opportunity will present itself. A bullet tucked in by the first rib will pierce the diaphragm, taking out a lung and/or top of the heart, forward to the opposite shoulder and out. Enough damage will have been caused for a good kill, assuming the bullet stays together and mushrooms nicely. The quartering on deer should be taken with a shot that enters just in front of the shoulder, to traverse the thoracic cavity and out behind the opposite shoulder. In effect, opposite to the 3/4 away facing deer.

The frontal chest shot can cause huge meat damage. A friend with a .243 has shot several Fallow this way to good effect, the bullet stopping before encountering the saddle or haunches. I favour a heavier calibre and bullet weight, so in this (rare) scenario I will wait for the deer to turn or pass up the shot. A 165g .308 will easily pass the whole length of a fallow, exiting or coming to rest against the femur in a haunch. Sure, the deer is dead, but there will be massive meat damage and gut content is released internally, too.

Low neck shots from the front can also cause much meat damage. The bullet kills the deer outright but may travel on to re-enter the body alongside the spine, causing loss of a fillet and maybe a haunch also.

Meat damage is often cited as a reason for head/neck shots. My dealer in Hampshire does not pay more for these types of carcasses and I applaud him. I am aware that others will only take head shot deer, which encourages unethical shots. A good heart/lung shot will cause minimal meat loss unless an explosively expanding bullet is used and fragments.

Throughout this article, I have referred to a controlled expanding bullet. This is key to any shot in a given body area and will determine to a large extent if the deer runs far after being hit. In my next article, I will look at my experiences with various bullets to explain my projectiles of choice.