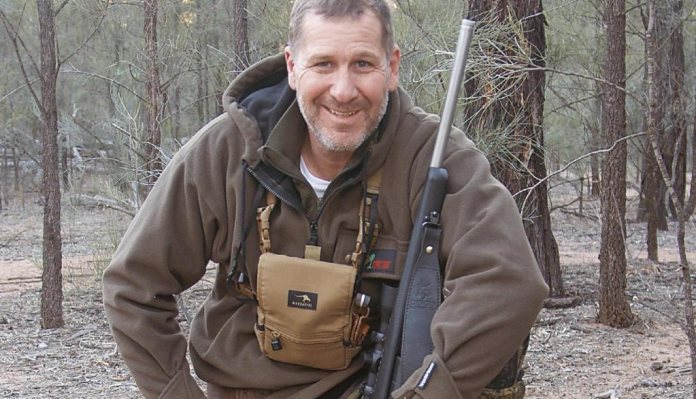 We were in the Pilliga, a million wild acres. Due to its sheer size, a big chunk is open to land hunting. We had two blocks at our disposal, Pilliga East at just over 120,000 hectares, and West, smaller at around 30,000 hectares.

The Pilliga is wild goat, and to a lesser extent wild pig country and we would be aiming for meat, as well as trophies. It also holds a myriad of native species including Kangaroo, Wallaby, Emu, and a huge array of reptiles, all protected. Then there are the more mysterious inhabitants. In colonial times, mass-murderer, Jimmy Governor hid from the troopers, while the Yowie, Australia’s version of Bigfoot and the Bunyip, a billabongresiding monster said to eat travellers who fall asleep by the water’s edge, all call the Pilliga home.

Its size means long days hunting and you need good gear, provisions, and navigation skills. This was my fifth trip, though the first in the middle of winter. We were in for cold nights, pleasant days, and fast cooling afternoons with temperatures sitting around 15º C daytime, and sub-zero at night. Usable sunlight was from 07.00 to 17.30pm; so, with travel time, we would be hunting 11 to 12-hour days.

Possibly due to the cold weather, and the drought gripping much of New South Wales, we didn’t generally see anything before 11am, with animals watering from early afternoon to dusk. Our approach was to head out around 7:30am, stay on the move until early afternoon, with the intention of bumping animals as they grazed. Around 2pm we would then set up on a wellwatered dam and wait.

Drought is a reality here, and ground water not guaranteed. This was made abundantly clear when we found dead Emus in an all but dried up dam. Crossing the mud, they became stuck in the sticky sludge just under the waterline. Tiring, they eventually collapsed into in the water. With night fall, it froze, killing them through a combination of exhaustion and exposure.

After a tough morning searching, Darcy and I went to a dam with known water. Tim and Simon were doing the same thing on another 40Km to our north. Getting into position, where we were both right with the wind, and obscured from view, we sat and waited. At around 3:30pm, I caught movement amongst the shadows. It was a small, singular sapling that was moving by itself. Lifting my binoculars, I saw a little black pig. It was the first I had seen on this trip, and when the going is this tough, you don’t pass up an opportunity.

I was hunting with a 308, Tikka T3x CTR with a compact Steiner Ranger scope. The illuminated reticle was perfect for the conditions and I aimed up on the pig. Intending to put the 150-grain soft point just below its ear, the shot was a little behind, though produced the same result, with it dropping on the spot.

Not wanting to scare any other potential targets, we stayed put and watched for movement. Sure enough, another shape appeared, this time a piebald pig. It was much bigger, though as it never really left cover, I was unable to tell if it was a sow or boar. Around the camp fire that night over a couple of cans of rum, we discussed our winter tactics and decided to stick with what was working. We also would change up the teams, and I would be hunting with Tim.

We decided to head over to ‘the little block’ and, after a few hours of active game trailing, we hit on the idea of trying to push them. The idea was for one hunter to cut behind a dam, while the other got in a good shooting position with the intention of ambushing anything that got moved on. It almost worked on the very first go with a pig leaving the dam, although unfortunately not in the desired direction. It was my turn and so Tim moved into the heavy cover and began the slow loop up to the dam. Keeping quiet, I then moved up so as to a have a clear view of the potential exit points. As luck would have it, a pig walked away from the dam and right in front of me.

It was a close-range snap shot, striking the pig in the head, its legs gave out as it crumpled into a heap. As we were about 90 minutes away from our afternoon location, we got a few photos and got moving. Later that day, we found ourselves sitting amongst the Kangaroos and Emus, as we waited to see what would appear. I was hoping to see that piebald pig again, and around 5pm a rough looking boar appeared.

It was almost a repeat of the previous day and tracking him through the shadows, when the time was right, I fired, delivering another clean head shot. Pigs have big heads, and it makes a sensible target on an animal that can otherwise absorb some serious punishment. It’s also good practice when hunting an animal that might take offence at a poorly placed shot and decide to charge. The downside of course is that it’s devastating on trophy presentation; however, none so far were of that status.

It was our last day in the Pilliga, and the ‘supposed’ home of the feral goat hadn’t produced a single animal! With that in mind, we again teamed up and doubled our efforts to find them. Heading out to ‘the little block’, luck was with us early on, as we got a good meat animal; so, we decided to head to the dam extra early, as it had been so productive to date.

Having discovered ‘Pig Alley’, I wanted Tim to try his luck, so he would be given the box seat, while I was a little to his left. Arriving at midday, we casually approached the dam and proceeded to scare off the Roos, Wallabies and goats! I was completely unprepared and Tim, firing off hand, clobbered one with his .30-06. It was a meat animal, so we retrieved it in double quick time and then got ourselves ready. Once in position, we both had good cover from the dam, so I was confident we would see something. However, I was exposed to the West, which on this particular dam was no big deal, as no animal had approached from that direction during any of our previous visits. Of course, that’s exactly where the goats came from.

About an hour after our first run in, I caught movement to the West. It was a small mob of goats and they were heading right at me. I gave Tim a nudge, and soon after he spotted them too. He shuffled into a better firing position and waited for the shot. When the opportunity presented itself, he fired, with the report of the .30-06 spooking the Kangaroos. He had delivered a solid hit and we had another good meat animal. With no chance of anything else appearing from the West, we did a quick retrieve and got back into position.

At around 4:30pm, I heard bleating coming from the West. Watching through my binoculars revealed the biggest mob we had seen so far. Amongst them was a large, black and white Billie, which I was keen to take. He looked to be in charge and stayed towards the back, however he did seem to steer the group and for a while it looked like he would push them straight over the dam’s western berm and into a perfect firing alley for both Tim and I. However, at the last minute they went a little South around the berm, right past where I was sitting.

Tim gave me the OK to drop him, so I waited for my chance. While doing so, he either heard our voices or noticed our slight movements, as he looked straight at me. It was time to fire, or we might lose the lot, so I made a slightly angled frontal shot and dropped him where he stood. With that, all hell broke loose, with Tim picking up another in the bedlam. It was just after 5pm and with the sun dropping fast we got a few photos, cleaned up the Billie and headed back to camp for the last time.

As Sunday rolled around, our hunt came to an end and it was time to pack up and head home. While we hadn’t seen a single Yowie, or Bunyip, we did have three coolers full of game meat and a bucket load of hunting experiences and memories. In other words, it was a perfect hunt; so, we hit the road with a day’s driving ahead of us and plans afoot for our next trip safari.