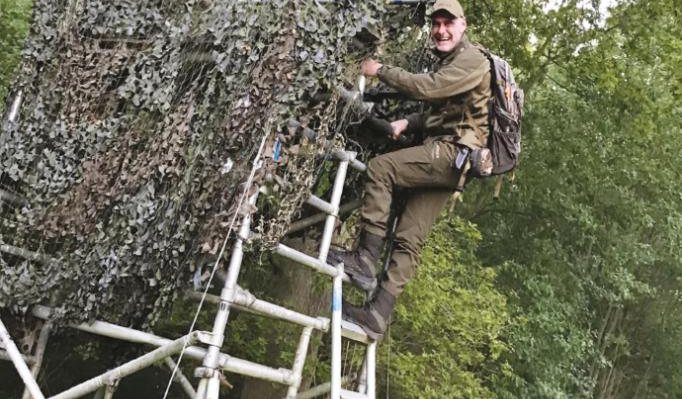 One of the good things about international press trips is meeting like minded shooters and making friends. Such a thing happened to me last year in the Czech Republic on the Norma boar hunt, as I met Michael Nitsch and his partner Simone Helmich, both Germans and hunters and as it happened Fawlty Towers and Land Rover fans and we got on like a house on fire. Both contribute occasionally to Shooting Sports in the hunting section, as you may have noticed, and make up a company called Team Winz, who have an internet channel and make hunting and gun test/product videos.

I asked them if they would like to come over to hunt Muntjac, Roe and Red and they agreed. We finalised a weekend at the back end of April and they would be coming in their Land Rover camper. As it happened, Simone had done her back in, so could not go. I thought they’d cancel but Michael asked if he could bring someone else, which was fine by me.

Michael is an ex German paratrooper (Fallschirmjäger) and brought his mate and fellow Fallschirmjäger Matthias Lang along. So, three ex-squaddies together for a weekend of hunting and fun in Suffolk. We got there at 13.00 and went straight to the range for a check zero. Michael was testing a new Swarovski Z8i 2-16x50 with their BTF (ballistic turret flex) system that offers a QD, BDC turret. His rifle of choice, a Sauer 100 in 30-06 along with a moderator and Hornady’s 178-grain Precision Hunter ammo. Matthias was a bit more old-school and opted for a Mauser M03 in 6.5x55 Swedish, with a Zeiss Duralyt 3-12x50 scope and moddy. Ammo was Winchester’s 140-grain SP.

I did not bring a rifle, as I was more taking the PH role for the weekend, but as it happened I wished I had, as I could have had a couple of good Roe bucks; such is life! I brought My Mauser M03 in 223 Rem, a 17WSM Savage B-Mag and a Winchester SX4 shotgun for vermin and any foxes daft enough to get close. Michael was keen to shoot a Muntjac, as he never had and I reckon did not really believe how small they were, as most Europeans and Americans never quite seem to believe you when you tell them. I also gave them the fox speech; as in ‘the #1 priority target above deer, as we have a lot of pheasants and partridge on the land, as keeper Andrew Johnson also runs game shoots’. Andrew had other stalkers on the land but we had the whole of the Huntston Wood area, which comprised of six high seats, so plenty of land and potential targets.

There’s a very good fish and chip shop near and I tend to use it for evening meals, yes it’s good but I do get fed up with fried dinners. Friday would be an evening stalk, starting around 19.00 and we decided to eat first, much to my pleasure Matthias produced some American MREs (meals ready to eat). Which, for posh man’s compo, is very good; so, we had a boil in the bag banquette and no washing up; result!

I put Michael up the ‘scaffold’, which is a big seat built from scaffold poles and Matthias on a free-stander. Both commanded three-way rides with good fields of fire, as the foliage had recently been coppiced and the evening was warm and dry. I went off to another seat well away with the 17WSM and waited. We were all in communication with our phones.

About 30 minutes later, I heard a bang, which sounded more like a 06 than a 6.5 and got a text from Michael saying he’d shot a fox! Result, I texted back: “Andrew will love you forever”, then I went back to waiting. Another shot about 45 minutes later and Mike reported a Roe buck down. That was when a really nice 2-year-old Roe buck walked out and presented side-on at 100 yards to me, well I was not going to shoot it with the 17WSWM; why didn’t I bring my 270 R8? I swung by Matthias’ seat and he had seen nothing; ‘every day’s a hunting day, but not every day is a shooting day’!

Michael’s buck had strange, flat, lyre-shaped antlers, which were quite unusual. I decided to call it a night and we gutted the buck and took it to the chiller on the farm. Both the guys were knackered after a long drive across Europe, then across the channel and up from Dover to Suffolk, so we went back to the caravan for a well-deserved beer and an early night.

The next day we were out by 04.30; I switched them around on the seats, with Michael on the free-stander and Matthias on the scaffold. All set in before dawn, I parked up and waited out of the way. At about 07.00, a shot and a call from Matthias saying he’d shot a Roe buck, but thought he’d missed it, 5-minutes later he rang and said he’d found it; Waidmansheil mate! A bit later I saw three red hinds crossing to my left at 300 yards heading for Huntston wood, I texted the guys to say watch out for them, as they were out of season. 30 minutes later, another shot and a call from Matthias saying he’d dropped a red, hope it was a boy!

Not long after, a shot from Michael and confirmation of his first Muntjac, though he was not sure if it was a boy or a girl. Time to call it a morning and inspect the beasts! The munty was a female and pregnant as they usually are. Matthias’ Roe buck was probably a 2-year old and a nice specimen, the red was a young male, and though small, dwarfed the Roe and Muntjac. I gave Andrew a call and he came up with his pick-up, as even after gralloching, the red he was too big for the back of my Land Rover 90. Then it was back to the chiller to hang the carcasses and a quick clean up and off to a slap up, full English breakfast that I had promised them at the Lollipop Cafe, an American-themed dinner.

Both had heard about the ‘full English’ but never tried it and they ordered the biggest on the menue – the Route 66. I had something smaller but asked for black pudding on the side. Matthias said what is that and I said it’s blood sausage, so he had a portion, as did Michael. Full to the brim, we went back and played around on the range for a bit, as I had my 223 M03, which I was checking out some new reloads. In the afternoon, we got our heads down for an hour or so, then eat dinner (MREs again) and got ready for the final hunt, as the guys wanted to leave early on the Sunday morning for the ferry.

Both said they’d keep the high seats they had that morning, which was fine by me. I dropped them off and parked up in a big field, well away and by the edge of the wood. I was potting rabbits with the 17WSM and around 20.00 I caught a movement out of the corner of my eye and froze! It was another nice Roe buck standing in the game cover about 150 yards away. Again, nonshootable and again I kicked myself for my lack of foresight for not bringing a suitable rifle and calibre. Guess I’d used up all my luck for the next few months!

Not long after, the boom of the 30-06 and Michael coming back to me saying he’d shot a Roe doe; out of season old mate. He then said it had three legs and was down and dead; what? No use crying over spilt milk; so, I said carry on, as there was still shooting light and maybe a Muntjac buck was around. Not long after, another 06 bang and a text saying he’d got another munty; sex unknown. It was about 20.45 and we stopped.

On reaching Michael’s position, he led me to the doe and I could see what he meant; the front right leg looked like it had been amputated at the shoulder. This was no shooting mistake or car accident! He said she was hunchbacked and hopped across the path and seeing her condition he put her out of her misery, as you would a deer in a road accident, to stop unnecessary suffering! The wound was old and I reckoned she’d lost it in a combine accident in last year’s harvest. I shudder to think how she’d survived and somehow lasted over the winter! He was a little worried but both Andrew and I said he did the right thing!

The Muntjac; you guessed it turned out to be a doe, so no trophy, but none the less some good shooting from ‘zee Germans’ and in the end two Muntjac, three Roe, including the crippled doe, the young red and most importantly the fox. It was a great weekend; Airborne Hurrah!