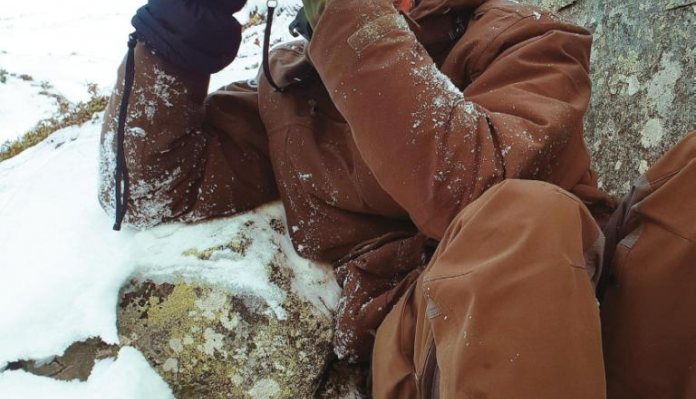 What am I doing here? Following my mountain guide in the torchlight, I trudge through the snow and see stars. Am I totally mad, why please do I do this to myself? The snow has a strange red glow and I feel like my lungs are bursting and when I try to fight my way out of a waist-deep snow hole, I break in again, as if I had broken into a frozen water hole. Again, and again, the loose powder snow traps me and I cannot get any further. Only when Franzl, my guide, comes to my aid, can I free myself and try to stay with him again. But first of all, back to the beginning of the adventure.

In April of this year I met Franzl on a hunt in Russia and is just like you imagine a mountain hunter. Despite his 59 years, he is fit, turns a hand-twisted herb with calloused hands, his face is tanned by the weather and he exudes a pleasant calm. Since childhood he lives on a centuries-old mountain farm and loves his home above everything else. try to stay with him again. But first of all, back to the beginning of the adventure.

As a hunter, we understand each other right away and I can hardly believe it when he invites me directly for Chamois in his territory. “It’s not that difficult in the summer, but in winter it’s a lot more fun chasing a chamois”, were his words and so we made an appointment for December.

In northern Germany, my home, there are no mountains, so not much challenge. So, I started cycling and occasionally put on my running shoes. Do not get me wrong, I’ve been doing a lot of sports since I was a teenager and I think I’m fit enough, but I did not want to get caught out by the conditions in Franzl’s mountains. Shortly before my departure, the rifle I had decided to use finally came, leaving me just enough time to mount the riflescope and zero it.

I decided on a Merkel Helix in 308 Win and a Steiner Ranger 4-16 x 56 scope. On the zero range, I was more than happy, as it all came together quickly, and I was soon in the black at 100m; good start! You never know what distances you have to shoot in the mountains, so I added a laser rangefinder and ballistic turrets for the Ranger. So, well equipped, I loaded up my expedition mobile, a converted fire truck, I call Betty for the journey. That too was a new experience for me. In the mud, I was on the road a lot with my off-roader, but I never had snow under its big tires before. No sooner had I crossed the Austrian border than it began to snow heavily.

Betty did not do well on the slippery roads, so, I stopped in the middle of the night in the Alps. High time to rest a bit because the next morning, the first stalking should begin. The night was quicker than I liked, but a strong coffee awoke my spirits and after Franzl and I had greeted each other warmly we drove his SUV up the mountain. Equipped with snow chains, we made it up to about 1700 meters, then it was all by foot. Step by step, it was initially on a snowy road towards the summit. I was glad to be able to carry my weapon in my backpack because when we left the path I needed both hands to move forward safely. Without the mountain stick, it would be virtually impossible, and I looked closely at how my companion used his to do the same. The knee-deep snow made it no easier and sometimes I had to catch my breath. “That’s the thin air but you get used to it in a few days,” said Franzl, during a break. The only problem was that I would be home in a few days to celebrate Christmas, but I had come and wanted to experience this high hunt. By now we had almost reached the tree line and also the first sight.

Several red deer grazed in the snow and we both had to laugh loudly as one of them butted his predecessor in the buttocks because he did not progress fast enough in the snow. Gorgeous scene! However, this was increased when we became aware of our quarry on the summit. We counted 23 Chamois and it was a dreamlike picture. Their black backs were clearly visible in the snow and I could not get enough of just watching them. What daredevils they must be to survive up here with ice and snow and to climb effortlessly through the rocks. For the first day, we had enough, and we went off to visit a neighbour in his hunting lodge. Together with his wife, he had already expected us and not with empty hands. It was plentiful and with homemade sausage and schnapps it was a fun meeting. I was again amazed how hospitable people are and how natural it can be as a hunter if you just get involved.

The following two days brought us in sight of the heard again and again, but always too far for a shot. However, there was another problem. At night, it had snowed again, and it was my last day to succeed in my quest. “We start early tomorrow at 5 O’clock and must be at the tree line at dawn if you hope to get anything”, said Franzl. He continued: “The chamois are all at the summit and otherwise we have no chance to get close enough”

No problem, I thought and said goodbye early and returned to my Betty to be well rested. Fortunately, when I woke up in the morning, it had not snowed overnight, and it was only -15º. As usual, it was the first part of the accent by jeep and then on foot towards the summit. Instead of getting used to the thin air, I felt the hardships of the last days in my bones. Every day we always covered the 10 kilometres and about 1000 meters in altitude. Not an easy task in deep snow for a flat lander like me. This morning, however, had it all. We actually had to get up without a rest or pause to be able to use the protection of the darkness. Shortly before the summit, the cover is getting sparse and in the end the few trees do not provide any privacy at all.

The snow was getting deeper as we climbed, and the headlamp of my guide gave me only a little light. Keeping pace became more difficult and only the will to reach the summit drove me on. When we finally reached the tree line, nature offered us a dreamlike spectacle. The dawn overshadowed the Karwendel and illuminated the Dolomite mountain range on the other side. What a sight! I was so happy to have made it on time and enjoyed the show to its fullest. Franzl, however, had no eye for this beauty. He had already identified several Chamois and nudged me carefully. A doe with fawn rested in front of us in the snow, while two bucks slowly moved towards the summit below. “The second one fits, look.” The view through the binoculars confirmed the statement, the bottom buck would really be just right. He drew pointedly towards us and even from this position I could not get a shot, so I crawled on all fours through the snow to get behind a rock.

From there I had a perfect position and just had to wait for my target to come into view. The Steiner rangefinders measured 197 meters and I turned the ballistic cap on the scope accordingly. Funny enough, I heard my hunting guide gasp excitedly behind me. Quietly breathing, I found the trigger with my finger and sighted in on the buck. It’s crazy how loud a shot can be when everything else is dead silent and the reverberating echo also reinforced this feeling. I slipped right a little after the shot and could not see if I had success or not. But a look at Franzl was enough, his big grin and the faint excitement made it clear it was righteous!

In order not to disturb the other chamois, we remained almost motionless for 30 minutes in the position and only then we hugged each other. What a feeling of happiness, four days of effort were behind us and, in the end, everything was perfect. In order to get my quarry, we first had to descend a bit to climb up in a bow again. But that did not matter anymore. The chamois had gone straight to the ground with a clean shot and I could hardly believe it. A dream came true for me and at the funeral I enjoyed everything. The panorama, the clear air, the prey made and even the self-rolled cigarette of Franzl. Recovering the beast was another adventure, but with so much adrenalin in my blood it was not a problem to carry him down into the valley. Waidmannsheil from Team Winz