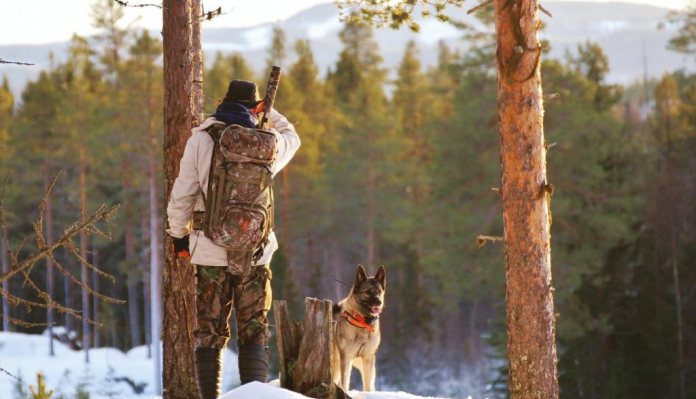 Every hunter probably has a dream of a certain species and trips into exotic lands. With us, it is elk in Nordic regions. I’m German, so when I say Elk, you Brits should read it as Moose! Several times already we have attempted to hunt Moose but with no success. As always, it was an exciting journey and great to be out in the wild but without a result. We Germans have a saying: every day is a hunting day, but not every day is a shooting day‘, such is life! However, this time it might be different!

In the summer, we contacted a suitable outfitter and got it all sorted and in October we headed to Southern Sweden, to match the rut. Myself and my partner, Simone Helmich, are Team Winz and we travel round the world videoing our hunts and adventures and testing guns and equipment in real time conditions.

We wanted to test autumn clothing and equipment, which would be affordable for the younger hunter. The hardware was the new Sauer 100 Classic (wood stock) in .308 Win in combination with a Minox ZX 5 scope. I kept it simple and proven for the ammunition, with Norma’s excellent 165-grain Oryx load, which is used by many Moose hunters in Sweden.

The Sauer 100 showed its pedigree and was shooting nice tight groups, so no problems on that score! I just needed a Moose! The gear was packed when we received the bad news from the organizer: unfortunately, we have no license for this season! This can not be true! I now got the feeling our trip was under a bad star. All further attempts to organise it from Germany failed, and we were gradually running out of time.

We had only one chance; Ted Shogren, a friend from the United States and owner of “The Sporting Trader - Worldwide Safaris”, was to save our plans. In his typical way of making the impossible possible, he only said: “Give me 24 hours and I will fix something.” It took one day and we got an address and an unbeatable offer. However, the dates and location shifted a little, to Lapland and a few kilometers south of the Pole and in December.

At that time of the year, temperatures can be lower than - 30 ° C, with snow up to your armpits at times, it’s hard hunting, so a re-think on clothing was necessary! So snow camouflage suits and winter boots were now essential. A look at the map showed a 2150 km drive and it would mean winter tyres for my trusty Land Rover, I may be German but I love that machine! However, bad luck struck again, as just before departure Simone caught the Flu and there was no way she could go!

There was no question of cancelling, so I drafted in a substitute in the form of my son Tom. He’s a hunter too and the prospect of such an adventure was most pleasing for him. So with the Land Rover packed, we set off on the great adventure. My vehicle is equipped with a sleeper cab, so when we got too tired to drive we could just stop, climb in the back and sleep. The dreary grey of the previous day was replaced by a lot of fresh snow and we tuned in to the weather in Lapland.

After two days of driving, we finally reached our destination. A log cabin in a small settlement in the middle of the Swedish wilderness, near Norsjö. Our guides, Johan and Christer received us like old acquaintances. While we were making plans for the hunting, a Swedish specialty simmered on the stove; Moose meat, dressed with a delicious sauce and potatoes.

So we tucked in and with bulging bellies we dreamed of the adventures to come.

We hunters are used to getting up early, but in Lappland the clocks run differently. At this time of year days are short and before 08.00 it‘s still pitch black and after 14.00 it’s starting to get dark, meaning a short window of oppertunity. When we woke the next day, we were amazed at the size and width of the area, which offered 4000 hectares, surely I would get lucky?

Unfortunately, the snow was so loose it was too deep even for skis, so we had to stomp through sometimes high snow, which is tiring! We soon found Moose sign and decided to follow the track. Johan, with a Swedish Graubhund (Elk Hound) named Sally, went ahead and we followed.

It was just a slight slope but I thought my lungs would burst and the ice cold, clear and extremely dry air gave the impression that we were somewhere in the Andes. Sweating heavily, even in these conditions, we finally made a short break and I cursed every cigarillo I had ever smoked. “It takes a few days, then you get used to it. It’s much worse in the summer, as it feels like 20° as in the Sahara“, Christer said laughingly. Since we could not continue in the deep snow and the dog had no chance to find a Moose, we turned around. The terrain and conditions would make it really hard to get near an animal!

On the second day, we went to another corner of the station. Here, the snow had not been so high, and we searched for sign. Quickly we found some and it was clear that there were four animals and we got very excited. We put Sally to them and impatiently she put her nose deep in the snow and soon locked onto the smell and started to track.

Dogs are fitted with GPS collars, so can be easily followed as they range ahead looking for Moose. When they find one, they will bark and try to drive them back to the hunters.

Apparently she had found and approached a moose, because we heard her barking and our adrenaline started pumping. Whoever has experienced this before, knows how impressive it can be. A small dog boldly braves this big game and tries to keep it at bay until the huntsman can stalk in for the shot. No easy job, especially with this snow and the long legs of the Moose give it a serious advanatge even over a dog.

Unfortunately, no success and with growing concern we looked at the display of the direction finder. Sally was already over 3km away and apparently she could not stop the moose; it happens sometimes. So it made no sense to continue and we decided to collect her; what would we have given to be in her place? We only had two days left and I started doubting if we would get lucky! But like I said, that’s hunting and there’s not much you can do about it!

To take advantage of all the opportunities, we positioned ourselves at the highest point of the area the next morning before daybreak. We had a good overview and with the Minox in the hand I glassed all the lower areas. No trace of a Moose, but we discovered a lot of flying birds sat in the tops of trees that offered a splendid display, as did an eagle drawing lazy circles above our heads; we still had hope!

We were near a gold mine and on the way we met an employee. He had driven his snowmobile into deep snow and we helped him get it out. When he saw our weapons, he comented casually that some Moose had crossed his path earlier. See one good turn deserves another! Perhaps Diana the goddess of hunting would still smile?

With new hope we shouldered our rifles and cameras and went in the direction shown and it was here that the incredible meeting took place. A young bull, a cow, and a calf were standing in front of us about 50 metres away, like black giants. On the one hand, they looked majestic by their size and on the other, their expressions, due to their long nose, seemed almost dull.

Literally, as if frozen, we stood there watching the events. The bull and the cow panicked and ran, however the calf stood in front of us and seemed curious. At that moment the disastrous misfortune happened. I was of the assumption that the calf was not shootable and instead pulled out my camera instead of raising the Sauer and dropping it!

Johan thought pictures were important to me at the moment and did not say a word. Only when we sat together in the hut in the evening did the subject come to the table and we all had to laugh heartily about it. Hunting is just more than simply killing something and so we have preserved a dream. Maybe next time!

My thanks to Johan the outfitter and Christer of Artic Hunting & Fishing and Ted C. Shogren of The Sporting Trader - Worldwide Safaris who made the dream happen.