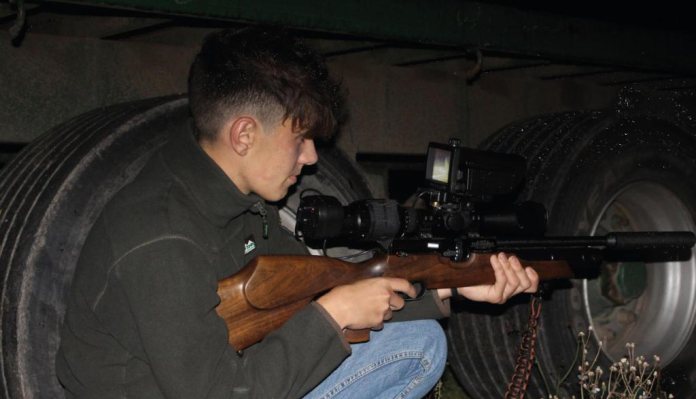 This may seem unusual (as this is my hunting column), but I won’t be doing any shooting today. Instead, I’m a spectator to some of Tom’s talents. We first met some years ago and, over time, he has developed into a very capable air rifle shooter. It’s been great to see. He recently sent me a message, letting me know that his grandad was having some trouble with the rats again down on the dairy farm. They were getting into the cattle feed, making nests and generally being a real nuisance. We had visited many times before, so I had a good idea what sort of a night we would be having.

We normally take it in turns to shoot but I had the new Night Fox 119v spotter to test, which worked out great for us, because it allowed Tom to get all the shooting. We rolled up at 20.00, so it was plenty dark enough for the scalies to come out. The bright security lights don’t help our cause but seem not to damage our efforts all that much. I rolled down the window and poked my head out, the 119V in hand, scanning for any possible targets. Tom was in the car, using the window-sill as a rest. He was using my faithful HW100 paired with Hawke 4-12x40 scope and Nite Site Wolf R-Tek. I mention the magnification of the scope because in these situations, the lower the mag, the better it is. This increases field of view and makes spotting rats far easier. When the shot is on and Tom is locked in position, he can wind back up to 10x and use the normal aim points. The Airmax has a great field of view anyway, so another factor in our favour.

The first rat I spotted was tucked neatly under one of the feeding troughs. It looked as though it was huddled in a ball to keep warm, but I can’t imagine it was cold given all that food it had doubtless eaten. I initially thought that perhaps it was just a little ‘nesh’ (it’s a local term, that means not very cold-hardy). The fact that it was in a ball shape was a real help to Tom, all of the organs were pretty well in one place. It was facing us so, naturally, a head shot would be the preferred option. Should the pellet drop a little low though, it would strike the engine room and it would be lights out.

That’s exactly what happened. Tom pulled the trigger and there was a deep thud, not the crack you get from a head shot. The rat just rolled over to its left hand side and didn’t even kick. If the pellet had struck the head it would thrash around making a great commotion. I soon realised that this happened because it was closer than first thought (I had forgotten to fit the Nite Site range finder), meaning the pellet didn’t have the distance to climb up into the centre of the crosshairs. Range finding at night is hard and an LRF is a definite asset.

With an extra gadget fitted to the side of the Weihrauch, we continued to scan. There wasn’t as many rats as normal and we later discovered this was because there was an intensive poisoning program underway. This was more likely the reason that number one was huddled up. He was probably quite poorly, and we put him out of his misery. There were still plenty more stragglers and we were ready to pick them off. Number two was a little further away; at the far end of the feeding troughs, it was out in the open. 35 yards needed ¾- Mil-Dot hold over and Tom this time went for the heart and lungs. It was quartering away from us so a head shot would be tricky. I could see through his Nite Site screen and he had pinned the aim point just behind the shoulder, a pellet there should certainly do the job!

He looked rock steady but took his time. It was good to see him really waiting for the right moment to take the shot. That soon came and Roland acted very similar to the previous one, with very little drama. We decided to stick around this location, the activity looked promising. Their evidence was everywhere; dug up dirt and runs through the loose feed etc. Within seconds there was another, just poking its head out from under a feed bin. I spotted this one, it was far closer than the last two and Tom had a job getting the gun out the window at a suitable angle to get on target. It was a mere eight yards, so a fair bit of holdover had to be applied.

With only the head visible, a vital organ shot was out of the question. Tom had to be precise. I advised 1.5 Mil-Dot was needed. All he could properly see was the bright glowing eye, the rest was a blur, again, due to the range even with that low magnification. Could he make it three of three? There wasn’t any messing about on this one. He fired and the pellet struck home, this was followed by some thrashing around before the rat rested in the middle of the concrete pad. On closer inspection, it was only a small one; this meant that the adults were still breeding. Maybe the poison wasn’t being 100% effective. I am no expert, but I guess it rarely gets them all?

I was very impressed at the capabilities of the Night Fox. They have really come on since the first model and even that was head turning, for the price. This, the latest, coming in at £149.99, is affordable and really user-friendly. It’s a cheaper option to the 120R, which has the recording capabilities. The buttons are positive, it doesn’t get turned on in your bag and the range is decent too for air rifle shooting. I might add that if I was using this with a .17HMR or something a little bigger, I may consider sticking an external IR touch on top using the mounts provided. This technically would extend the range to whatever you like. It has seven infrared settings from 1 - 7. I found that number five was a great all round, as it has enough range for farmyard shooting and also offers good battery life.

We continued to drive around and managed to bag a few more. Tom wasn’t missing much, that’s for sure. One of his shots was on one in amongst some tyres. This posed certain dangers in itself. Ricochets were a real possibility here, so we had to be sure of the shot. There weren’t any cows this side of the farm though, so we were pretty safe. It sat just in view. Tom would need to thread a pellet between two tyres to make contact, but with his ability and the laser accuracy of my gun I had no doubt. It was like shooting rats in a tyre.

His shot dropped him, but as soon as he did, another popped up. This one was attempting to drag away or eat the dead one, I’m not quite sure which. We have seen this a few times, as they are known to be cannibalistic. Tom lined up and took the shot as the rat paused to lick what could have been some blood, that too dropped to add to the bag. All the gear was working in harmony. The gun never missed a beat and the Nite Site did its thing. I could see the battery on the Night Fox starting to get a little tired though after a few hours. The temperature was dropping and they never like it in the cold, but I was still impressed with longevity.

There was time for one more shot. The rats were getting a little wary of the engine noise, so we continued on foot. Stopping to spot now and then to scan, we covered ground at the same pace as the car and far quieter. The downside was the temperature; the car certainly wins points for heating. Tom dropped a knee and lined up on a rat. I hadn’t spotted it, so moved around carefully to get a view. I watched through the spotter as he picked his moment. The first shot was a miss, not inexcusable given his track record this evening. He composed himself, re-cocked and settled back in for another shot and finished another rat that thankfully sat tight.

With a half decent bag, we called it a night. We grabbed our gloves and began picking up the dead rats from underneath the feeding troughs. Leaving them lying around wouldn’t keep us in the good books and dropped them in a pile for the farmer to dispose of. This way he could also see our work. This shoot would be the last time Tom and I would see each other for a while. I’m off to Japan skiing for a few winter months, I now think of him as family, so saying goodbye was tricky, but we are looking forward to shooting together again in the spring.