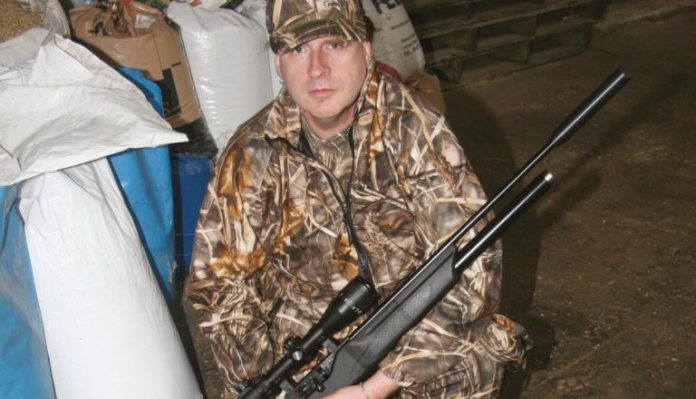 Having very recently tested the Walther Rotex RM8 multi-shot PCP I was reminded of the time I had their first production multi-shot PCP - the Walther Dominator - out on long term test (anybody remember that rifle?) Unfortunately for Walther - it didn’t fair that well here but although it had its faults - mainly being overly long, front heavy, unwieldy and only available in .177 calibre - call it like you see it Pete; but it did have its plus points too as it was very accurate and reliable. So much so I used it on many occasions and for various quarry species. In fact, the action of the Rotex RM8 is very, very similar to the Dominator so that says something for the base design. However, you’ll see mention of that in my gun test of Walther’s latest offering so enough said and back to the matter in hand. Which is - as I had quite a few memorable outings with the Dominator and one of which I have pictures to prove, I thought how timely to relate a trip here. And if the location seems familiar I make no excuses as at one time it was a very productive shooting location in a particular barn that I’ve shot rats in many, many times before.

OUT OF THE NORM

Not exactly the norm – but for certain situations an air rifle such as this can be used for specific quarry to good effect. Let me explain! The barn I was shooting in was no longer packed with all manner of farm materials and machinery so a carbine wasn’t necessary as I had plenty of space too manoeuvre and I was also intending on shooting across the width and length of the building from a static ambush position to where the rats had been seen to frequent. This was an area directly opposite were at one time grain had been stored in huge silos, they’ve now long been demolished, but the precious grain is now in a new purpose built outbuilding close by.

Good move, but for a rat – a mere hop, scurry and a jump away from a cosy home because the main barn I was shooting in was stacked high along one side with hay bales. So, over in the new barn they’d find food but inside the original, the hay used for overwinter feed for the cattle also made nice warm comfortable homes which the rats would burrow into. And where the grain silos once stood the farmer now uses the ground for stacking wooden pallets and other miscellaneous materials. The reason the rats were still seen in that area was possibly because of habit or moreover because the farmer always left a few sacks of ‘spoiled’ grain nearby - the contents intended for feeding the ‘duck-pit’ managed by the shotgun lads, so when the rats did venture out for a nibble (closer to home so to speak) they’d head for this area. So the plan was I’d sit in comfort on the bales and whack them when they appeared over the other side of the barn - well that was the plan!

The rats had still invaded the main barn- as is their winter want – and were as bold as brass, appearing in broad daylight and at ranges from as close as 5 yards right out to 45 yards so a recoilless PCP air rifle suitably scoped up was in my opinion the correct choice of hardware. Also my static shooting position ‘was to be’ sitting on a bale of hay leaning comfortably back against another large stack of bales until anything appeared. So that meant a ‘long’ rifle, which the Walther Dominator was and the fact I should be taking shots rested on my knee didn’t mean I needed the fastest handling of guns – just one that was very accurate, reliable and easy to operate.

So back to the tale: Just as I got the rifle out of its ABS carry case and prepared to get onto my comfy ‘perch’ a rat scurried from behind me to disappear under one of the wooden pallets. I anticipated where it would emerge on the other side so quickly leant the rifle across a hay bail for a steady support in readiness of my first shot. Sure enough a whiskery snout soon appeared stretching up sniffing the air possibly deciding to clamber up the maze of woodwork or scurry back towards the bales – however before it could decide where to go I gently squeezed the trigger, cleanly sending the lead on its way - the rats head dropped instantly to the barn floor stone dead – who says a heavy .177 calibre pellet when placed with precision in the kill zone isn’t up to the job of ‘rat dispatch?’ I left if where it was and hopped up onto the bale I chosen to sit and prepared to settle back on my comfy shooting position for some more action.

Now as so often can happen things didn’t exactly go according to plan as the rats had obviously wised up and weren’t visiting the grain sack, well not in daylight hours as I’d sat patiently for at least two-hours. I quickly had to formulate another tactic. As it was obvious they were staying close to the cover of the bales I was sat amongst. I soon decided to put a few piles of grain out at set points so they’d have to show themselves from under the safety of the bales to get at the food I’d put close to their hidey holes. In essence a simple baiting out tactic that at times works well for rats!

As expected eventually greed got the better of a few and shooting alongside the bales I accounted for three or maybe four more scaly tales. Still not the ‘action’ I was expecting or indeed hoping for so I decided it best to turn my attention to the roof girders– if rats aren’t travelling along the deck those are the places they will be using to get from one part of a building such as this to another.

As I used my ‘Ratgrabber’ (originally bought from Crawfords Shooting Supplies 08700 660325) to pick up the dead rats I’d bagged to place them in a bucket that I’d use to carry and tip them into the incinerator - sure enough the sounds of squeaks and scrabbling’s overhead proved my theory correct. You may get bored of hearing this from me; but NEVER, EVER pick up the bodies with your bare hands as old ratty carries a lot of unpleasant potential infections. Hence my preference for the most practical Ratgrabber!

Quickly walking back to where I’d left the ‘Dom’ (de-cocked and magazine removed), I quickly loaded back up and leant on the nearest steel roof support to steady my aim for an upward angle shot. I soon spotted two up above and to my left, both testing shots but with a solid rest I simply composed the shot and hit one square in the side of the head at about 35 yards whereupon with an unnerving screech it dropped to the floor. As I looked over to ensure it wasn’t moving I caught a glimpse of one to my right now on the ground and scurrying for cover of the very bales I was shooting from.

Why it reacted to my movement in such a way I’ll never know but it actually froze a few yards out from cover. Quickly cycling the action, adjusting my position and with careful aim that was another in the bag. I’d now been ‘on the ground’ much more than first planned so I eventually got back on the bale and gave it another couple of hours in this comfortable position taking a few more rats from the roof girders. I don’t miss that particular rifle being at my disposal but this tale does go to show that choosing the right tool for the job and being prepared to change tactics quickly when required can often pay off…