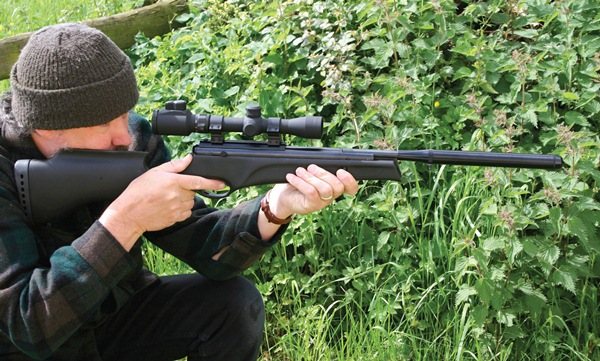 The rat is universally loathed by home, farm and land owners alike. Yet like the squirrels and feral pigeons I shoot, this humble yet prolific vermin can really offer a sporting shooter many hours of good sport. Their large numbers and liking to inhabit farm yards allows the shooter not only to be almost guaranteed an evening’s sport and for that matter worthwhile pest control job but you can vary your tactics and equipment accordingly.

This makes for an interesting approach to rat shooting with stalking, ambushing, baiting and lamping all distinct possibilities, with a diversity of guns that can be used given the location! I plan a day’s shooting knowing that the chance of success is pretty high and at the same time the land owner will be grateful of the help.

The Brown rat is your only legal quarry species and can vary greatly in colouring and size dependent on location and feed source. Weights from 280 to over 500 grams are common with corn-stuffed individuals inhabiting well stocked grain stores being even bigger! As with squirrels they can be tough little critters to dispatch instantly! Although some can be over a foot long including the tail they are quick and seem to have almost super human abilities to negotiate the steepest walls, slipperiest floors or smallest holes.

They can live in large communal groups usually in the form of underground burrows who`s entrances give them away. But adaptability is their greatest strength and they will form a home anywhere they feel safe, warm and a food source is close! They are prolific breeders; mating all year round with a gestation period of between 22 to 24 days they can have up to six litters (6 – 12 babies) per annum. In recent years the milder weather allowed them to breed more! In areas where rats were usually only encountered at night time I am seeing more of them in the day too.

In summer rats are usually in the fields, hedgerows, culverts and ditches. Here you can stalk as you would a rabbit which can be actually quite exciting and difficult equally but once one is shot you usually have a long wait to see another.

As their food sources reduces in the winter they are more active around barns etc., largely due to the stores of grain and livestock foodstuff stored there. Here you need to look for runs, holes, burrows, teeth marks on wood and a real give away droppings. DO NOT, REPEAT, DO NOT touch droppings directly and if handling a dead rat always use gloves, they carry disease.

Armed with this information you can decide where to position yourself for a safe yet panoramic view for the best chance of a shot. Being elevated also helps as you’re less likely to give away your position but recheck your trajectory when shooting at angles. You can sit and wait and let them come to you, though baiting will speed things up! Bait an area along the runs or at dead zones where a safe shot is guaranteed and only about an hour before you begin shooting is best i.e. at a certain time so the rats get use to it being there. Do not place it at burrow entrance or holes disappearing into bales as you risk a wounded rat getting away. Items like dog food or peanut butter smeared on rafters and floor will hold a rat in position well! Week-old tinned sweet corn works too!

Equipment can be varied as it means you can mix it up a bit with all manner of bullets, pellets, lasers, night vision or lamps.

If you are lucky enough to have a trail camera you can build up a good idea of the rats’ movements, numbers and sizes. Equally areas not to shoot so you can concentrate your efforts accordingly and also captured images to show a land owner you are going about vermin control in a responsible and professional way.

Air rifles are really good rat tools, especially because shooting around a farm yard has all sorts of hazards such as glass, plastic roofs, machinery and livestock. A standard 12 ft/lb gun can be a silent and effective tool if used at close range from a fixed position for head shots! A PCP repeater with a detachable magazine such Air Arms or Daystate are excellent and allow a speedy second or third shot, quite often necessary on rats.

I like the simplicity of a single shot such as my BSA Tactical or RWS 440. The RWS is a .22 which is a good all-rounder and I have even used the Air Arms ProSport in .177 and V-Mach .20 custom for rats but you have to be careful of over penetration and damage to property. That’s why I love the BSA Tactical in .25, superb on rats, the big lumbering 19-grain Rhino pellet have a curved trajectory for sure but at close ranges are very effective as they produce a lot of trauma! However, I would always advocate a head shot where possible!

For rimfire I use a fully silenced Sako SSR rimfire, which is near 100% silent, or my Sako Finnfire rabbit gun. I favour Eley Subsonics or Lapua’s hollow point subs.

However, speed and energy is much higher so be aware of ricochets and collateral damage. However, that extra energy is worth it because rats can be dropped instantly without little fear of wounding and loss. A 5 or 10-shot magazine is very welcome and I always carry a couple of spares. Sometimes I use CCI CB Long ammo which pushes at 29-grain bullet at 705 fps/32 ft/lbs and work in a boltaction reliably. Though less powerful than a sub there’s less risk of over penetration and they yet still get the job done! That’s not to mean other rifles are not suitable, Browning T-bolts with their fast straight pull bolt action can be used to great effect, as can the Anschutz X1V carbine and CZ 455 models. Repeaters like the Remington 597, CZ 512 or Ruger 10/22 are also very handy rat tools.

Small calibre shotguns (.410 etc) work well, but be aware of the peripheral damage they can do, plus they are noisy and will scare off animals in the area.

Scopes or sights actually remain the same for either air rifle or rimfire. Due to the short ranges and the need for fast target acquisition I like low powered scopes with mags from 1.1 – 5x tops, this gives you a wide field of view to spot, track and shoot a rat yet still have enough peripheral vision to check the backdrop and spot other targets. The old Simmons 1.5-5x20mm is great as is the Leupold 1-5x20mm, I use both but for a touch of class the Kahles 1.1-4x 24mm is hard to beat.

The Zeiss Z -Point again is a cracking fast reacting red dot sight with Zeiss`s build quality and ruggedness although the Deben Crossbow red dot is cheaper and again works very well with three red dots for ranging. Higher than normal mounts help to keep a heads up stance for quick shooting if necessary.

Lamps with a variable beam width are handy so you can scan a large area of cover and then tighten it up for a more concentrated light. The Deben range of rechargeable LED lamp`s, like the Stingray, have an adjustable beam that last hours and are incredibly useful as a dual role rat, rabbit and fox lamp and has the added benefit there are no dangling leads from a separate battery on your belt. Lightforce from RUAG make superb hand held and rifle mounted lamps which I tend to use for foxes and there are any number of other lamps such as a Clulite Interceptor and head mounted kit such as the HL13 which works well and are reliable.

Night Vision is probably your best bet, as covert ops can be beneficial , even after a shot so long as you do not move, rats become a bit disorientated to where the shot has come from and often come out sooner than if lamped in the dark.

Digital NV sight`s are ideal such as Pulsar and Nite Site, they offer good value for money and great light clarity with a good IR illuminator fitted. Again older Gen 1 or Gen 2 dedicated night sights from Thomas Jacks , Deben or Starlight can be cost effective and cheap as the ranges will be short so an expensive NV is not necessary.

Pest certainly, unwanted most definitely, but good sport too! Rats can give ideal practice of rifle technique and ballistics as well as out of season stalking albeit on a miniature scale. As well as doing the land owner a good turn it’s a good way to spend an evening or night. Quite often the bag is high and ammo costs are minimal although the temptation to get high tech kit is hard to resist…