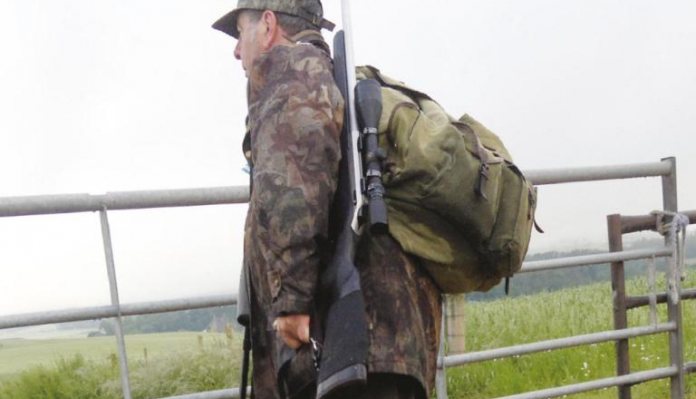 After all my previous well-made plans to travel north for roe buck failed, I finally made it; though the trip itself was not easy, travelling through the night after just finishing work. My friend and stalking companion Gary arrived right on time, we loaded my gear into the car and set off. We had moved 20 yards when we claimed our first, a wood pigeon; it came flying through the trees and into the front of his new car! I tried not to look at my wife’s face as we hit the pigeon; if there’s one thing she likes it’s birds, needless to say we didn’t stop!

When travelling north, we normally only make one stop at Hamilton to fuel and coffee up, the whole trip taking 7-hours. But with travelling at night after a hard day’s work we made three stops, I must say I failed miserably at keeping my chauffeur entertained and found myself fighting to stay awake. The one thing that did the trick and woke me was Gary swearing to avoid a roe deer that ran from the centre reservation. colliding with the offside front, cracking the headlight and the spoiler- was the car an animal magnet?

50-miles farther on and we reached our destination and time to take a proper look at the damage; headlight cracked but still in one piece, while the spoiler looked like it had just unclipped. We part unloaded the car, taking out only what we needed (the rifles and a quick change of clothes) then proceeded on our first stalk. The crops being high meant we would have to, if need be, take neck shots and then only if they were near the edge of the fields. The last thing we wanted to do was to trample the crops looking for a beast, or lose one for the harvester to find.

Our best chance would be the deep drainage ditches; the hardest, getting within range with the crops and the grasses in the ditches being high makes it very hard to approach. A belly crawl is impossible; all I could do is to stalk very slowly, hoping to catch sight of a buck before it sighted me. All kitted out and feeling a little worse for wear, after all I had been up 23-hours, we set off on one of the easiest stalks we know. Down the track to the end, where we could spy down a narrow strip of set aside, then from there cut across along a broken down dry stone wall to a small wooded area. Then along the drainage ditch back to the farm; in other words, walk around one 70-acre field.

For this stalk, we would stay together, more of a reconnaissance, to see where the deer were, then plan which way to approach them later that evening. We were both tired, so not fully switched on when we walked onto our first buck, not 10 yards from our cabin, head and neck above the crops. I slid my Tikka 243 off my shoulder, lined the cross hairs on its neck, fired and missed, I could see the bullet strike the crops just to the left, a clean miss, as the buck moved on another few yards.

I followed it in the scope and fired again when it stopped to look back at us, this time there was no mistaking the smack of the bullet as it hit muscle and bone. Gary kept his eyes fixed on the spot to guide me and I soon found my first buck; it was then that I realised I had left my camera- at home a very important bit of kit when writing about my exploits for the magazine. Cursing, I carried my buck to the edge of the field, where I field dressed and left it to pick up later. In total, we counted 11 roe, most of which were in a set aside and as always, all does when the bucks are in season.

We picked up the buck and hung it in a derelict building, where there’s a consistent cool breeze blowing through and cover it over with a fly net, then get to work cleaning out our cabin and grabbing a few hours sleep. That evening, the plan was to follow the same stalk but then split up when we reached the small wooded area; Gary to the set aside, while I went further down to a gate way, hoping to intercept any roe that are disturbed, but I saw nothing within range and Gary only saw does, again we made plans for the morning and retired to our beds.

The alarm went; forcing ourselves to get out of bed, we got up, dressed, had a coffee and were out. We drove around to a broken-down gate, where I was to walk in from, while Gary drove back to the farm, to start his stalk from there. In our haste to get out I forgot my leggings and was soaked within 15 minutes, and with my wet pants clinging to my legs, I found my stride was restricted.

We had both sighted bucks but had not managed a shot, our plan was if either of us heard a shot we were to meet up again, to help locate and deal with the beast. It wasn’t long before I heard Gary’s rifle direction, so I made my way back in the general direction from where the shot came from. When I came across Gary, he was watching something down towards a corner of the field, so I stayed back. He noticed me and waved me on, I went slowly forward to where he was standing, he said he was watching a buck when he noticed a doe limping.

He shot and connected but she still made it into the crops. Gary managed to track her as she ran through the crops and was waiting for me to go in, so we did not lose the marker. I soon found her and inspection showed the front leg was crippled and she’d been hobbling for I don’t know how long. She was in bad condition, so I guessed had not been eating well. I loaded her into my roe sack and started back, when I noticed movement on the edge of the field- a buck! I let Gary take the shot, which he did quickly and cleanly! Then I remembered he had a good camera on his mobile, so we managed to take some photos. He got a buck and doe with his Tikka 243 and one wood pigeon and a roe with his car and a £350 bill for repairs.