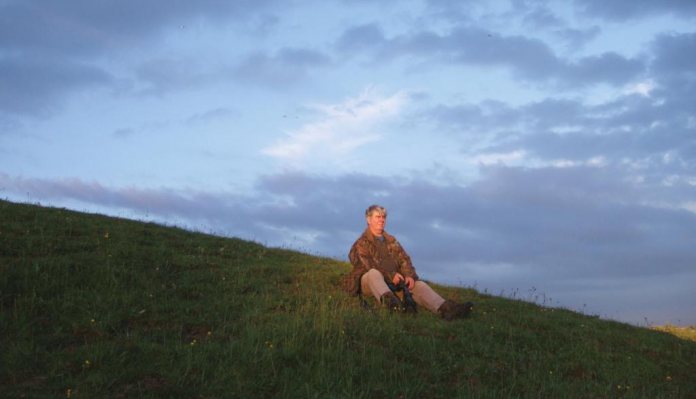 So much has been written about going out with lamp and rifle, or more recently rifle and night vision, that nothing or little has been written about early, or late evening forays. I love getting out in the field at first light and at this time of year that could be four or five o’clock, it gives me the chance of seeing just what there is out there, without being disturbed. The sense of peace and tranquillity is well worth getting out of bed at 3.30am for.

Late April through July gives the longest days, and depending on the weather, will dictate when the crops are cut, including grass, which is the main draw for fox. When it’s being cut, they will throw caution to the wind to get first in on the mice and voles that are made homeless by the mower! The hardest thing about foxing at this time of year, is once again, to get the farmer to tell you when he is going to mow; it’s taken me over three years to try and train one particular person. At first, I would venture out to find the field not only cut but bailed and cleared. After constant nagging from me, he would ring me to tell me he had been watching not one but lots of foxes taking the Mickey following him around, while he was mowing. So, still the penny hadn’t dropped that the smell of new mown grass is like a dinner bell to them, scooping up all the displaced mice.

This year, he’s got a little better, ringing me as he left the field and on his way home, so it was boots on, grab the rifle and out, arriving on the edge of dark, just in time to see a shadow moving up and down the rows, suddenly changing direction and stopping now and then. It was, and could only be, a fox mousing. Resting on a dry stone wall, I picked it up in the scope but due to its erratic movement chose not to take the shot, as I didn’t want to miss or worse still wound it.

In situations like this, nine times out of ten I have found that there’s no point calling, or even mimicking a mouse squeak. As if they’re only interested in what’s directly in front of them, so why go chasing up the field when they are all around within striking distance. A day or two after the field’s been cut and most of the mice have been cleaned up, would better your chances of a fox coming to the call. When shooting in a cut field, grass or whatever crop, it’s always best looking down the rows not across them! As a fox, even a large one, will disappear behind the rows and at best all you will see is a slim pencil like figure (its back) not really enough of a target! For the inexperienced, with an itchy trigger finger, it could result in a miss or a badly placed shot.

So, it’s got to be better looking down the rows if it gives you a good clear view and you can see further it makes sense. If you can’t get into position, due to the wind being wrong, then get there early and sit it out. You won’t be disappointed, as a lot of the hard ones are usually brought to book during harvest time, or very early in the morning overlooking a quiet corner or valley, they’re known to pass through.

With all my knowledge and experience, you would think I never miss and I get it right every time, but you would be wrong! A lot of it is being in the right place at the right time; if I had known he was going to cut the field, I’d have been there while he was cutting or as he finished. However, getting there on the edge of dark I could only make it to the dry stone wall with a limited view, which is so not ideal. But making the most of the situation, I doubled backed to the edge of the field and walked down the rows to the bottom gate, with a light breeze blowing from east to south west not daring to flick on the lamp until I made it to the gate, so as not to disturb any foxes. Once there, I stood quietly for five minutes before flicking on the lamp but nothing, the same a few minutes later and again nothing. I could guarantee fox would be in the field, so set off in search of them, crossing over the rows of fresh cut grass lamping up them every second one Being high up not only allows you to see over a larger area but also gives you a good back stop A hay field that’s been shook spells the end of the mouse banquet, so less chance of catching a fox out early but probably the best time to try and call that I crossed. I soon picked up eye shine for a split second, then again when I passed the beam back over, it was a fox travelling down one or two rows over.

Lamp off- game on

Lamp off, I crossed the next two rows, set up my sticks and rested my rifle ready, before flicking on my Trio Pro Gunlight. The fox looked up; just as he did, I touched the trigger and on the report of the rifle, heard the distinct thump of a hit. I was able to keep the fox in sight as the bullet struck, making it easy to pinpoint, which can save time looking, or worst still less chance of losing your prize. Though in this case, all I had to do was simply to walk up the rows until I came across my quarry; picking it up, I placed it on the edge of the field near to a tree for the farmer to dispose of the following day.

Continuing again, the lamp picked up eye shine; this time a roe doe, closely followed by a nice-looking buck with good antlers. I had been up 18-hours, so called it a night and headed for home. Tomorrow I would get into position earlier, hopefully there would still be enough to draw in the fox, to make it an interesting evening.

Lamping in this area is hard, due to the foxes being educated by amateur foxers, that’s why I can’t wait for this time of year, I don’t need a lamp or any form of night vision. No one else wants to get out of bed at three in the morning; so, I am pretty much on my own- result!