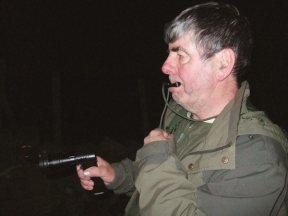 Nothing had touched the odd fallen ewe where as normally the fox would of had a go long before the farmer had the chance to pick it up for disposal. Though I would replace the bait in the cage traps regularly nothing had even been near the door. I should mention; when trapping foxes it’s best to replace the bait before it gets maggot-ridden otherwise it will only attract badgers!

Once I had a cage trap out on small holding and told the land owner to check it daily and change the bait every three days. If he ran out I would take some more up, or if the trap was successful go and dispatch the prisoner. As there was no way I was going to do a 40-mile round trip just to check one trap. One day I was in the area and called by and what was a chicken for bait was now a green bag full of maggots! I returned the following day with fresh bait only to find a badger inside which had eaten everything. So stuffed was it I had a job to wake it up to release it! I have experienced this a few times in the summer as maggots appear within days of baiting; just to give you food for thought so to speak!

Moving on; these foxes seemed a little bold to say the least walking through the middle of the field any time of the day as if they owned the place. With some farmers if they see one fox they’ve seen twenty-one so something had to be done to give them piece of mind especially as lambing was now getting nearer. As mid afternoon was when most of the sightings occurred I was in position by then, but due to the lay of the land I was undecided (rifle or shotgun) and I would love to get a combination gun (rifle/shotgun) being the best of both worlds! But I would have to sell one bit of kit to buy another something I am not prepared to do.

I settled for the rifle and waited in the farm yard were I would have a wider range of view and would need the extra range afforded. After two hours I must of switched off allowing the fox to slip by me but not the sheep noticing all their heads were up watching something in the top corner of the field. I looked just in time to see a tail going up the hedge before disappearing over the hill pointless chasing it as the last thing I wanted to do was to mess things up and spook it. But I’ll be there same time and place tomorrow just a little more awake!

The following day I got into position an hour later to help combat my drifting off again; I couldn’t afford a repeat of yesterday with all the other farms I have to cover. I waited until the light faded to the point when every clump of reeds started to look like foxes, before packing up and heading for home to grab a coffee before heading out again hopeful of picking something up in the lamp. Due to work commitments I haven’t been getting out till late; the problem with that is it’s best to vary the times when out foxing especially if your drawing blanks. When you’re not picking anything up in the lamp that tells you your timings wrong half an hour either way could make all the difference.

They seemed to be active through the day so must be laid up close by, so I wanted to get out as soon as I could after dark in the neighbouring fields. Here there is less cover and the fields are five times the size making it harder for them to pass unnoticed. That night I bagged a large dog fox I had actually given up after half an hour of calling when I flicked on the lamp one last time as I walked away picking up the fox well out in the open.

Quickly flicking the lamp off once I assessed the situation and determined the direction of travel allowing me to set up my sticks and make ready. This time the fox stopped for a second as soon as the beam hit it then changed direction one quick squeak stopped it long enough for me to touch the trigger dropping him on the spot. We made our way to where it lay, with the lamp on and talking, then before we picked it up my friend touched it lightly with his sticks - what a surprise we both got when it sprang to its feet stumbling as it ran off . Another shot stopped it for good, but as much as we looked no way could we find any trace of the first bullet strike. Lesson learned, always approach with caution instead of patting each other on the back not keeping our minds on the job.

As for lamping equipment my set up is a Clu-Briter rechargeable hand lamp from Cluson Engineering with a focused beam of over 250 yards. With no battery pack or lead to get in the way I fell in love with it, plus it’s so light and handy! My technique is with its lanyard around my neck; when I pick something up in the beam I drop it and switch to my rifle fitted with a Trio-Pro gun light. Again it’s so lightweight and its good output is second to none. The whole combination is fantastic and really works well for a one man operation.

When I get something that works well rifle, scope, ammo or in this case lamp I stick to it - there’s no point changing something that works. Not that I won’t try something new, that would be silly, but in this case it would have to be something special to knock the Clu-Briter off the stand and it’s always worth having a backup. It wouldn’t be the first time I’ve gone out two nights on the run without charging the battery only for it to fail me part way through the outing. Again my backup is a very similar set up Cluson’s rechargeable LED Pistol Light and a Pro Scanner 3000 Gun Light. There’s very little difference between the two set ups. The caller I was using was the Fox Caller.