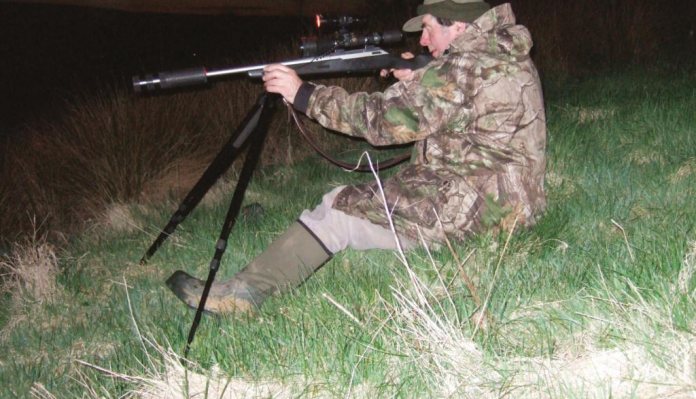 My first outing since falling down stairs and breaking my toes was a call from a long time sufferer of fox persecution, as his ponds are now bare of the ornamental wild fowl! Though I have accounted for a good number of them, perhaps a little more thought before digging the ponds and putting the fencing up would have helped? However, with heavy cover all around the ponds, it limits visibility of the quarry, let alone getting one in the cross hairs. In a situation like this, I have to rely more on trapping, but trying to get the land owner to keep them baited and set is hard. But hopefully persistence will pay off, with both in the end.

One problem I have is that when I do bag a fox, the land owner drops his guard, thinking it’s over, which it isn’t! He doesn’t understand that vermin control is an ongoing thing, you just can’t let up as soon as you get one, as another is quick to move in! In this case, the pens are close to an easy passage, I sometimes wonder how many used it? I mainly bag foxes with lamp and rifle or live catch traps (NO SNARES!) The only way I can hope to get one in the cross hairs is after they’ve visited the ponds and are making their way up hill into more open ground. More often than not, they make their way back on to the motorway embankment to come through the fence and into the fields further along undetected.

It really is more luck than good judgement as to where they’re going to show next. To make it even harder, the maximum range with a safe back stop is around 70 yards. Also, if the wind is blowing in the wrong direction, the night is over before it’s begun. Even with the traps, there are only three places where I could put them, due to the public. I have lost a number of traps, thanks to animal lovers, so such things have to be even more discreet; though that does not help when they wander off the path, or nose around the farmyard looking at the animals.

But what can you do? This farm is an absolute nightmare and any fox bagged is purely symbolic, as the fox has already won. I feel more like a vigilante rather than a pest controller policing this area, but I can’t complain, I have a piece of ground with just about everything on it, including deer. My first night out was to the back field, well away from the duck ponds and chicken run. No point standing guard if I can’t see anything, due to all the cover; all I could do was to hope the fox would travel into and across the open field towards a neighbour’s pen. Did it work? No!

I stood with my back against a holly bush, to try and blend in, until I got itchy feet, so walked the boundary. I had a sighting on the skyline, and, convinced I knew where it was heading, took a short cut to try and head it off but only picked it up again at a distance in the lamp. I was too late finding it; hard walking, I headed back to where I started watching the fence line, just in time (or so I thought) as I heard something moving around in the wood behind me.

Not daring to move, or switch the lamp on, for what seemed ages, for risk of spooking whatever it was and to give it time to come out of the wood into the field. When I did flick on the lamp, I had three pairs of Roe deer eyes looking back, 50 feet from me with not a care in the world. I got fed up with the lamp flicking on and off, so would give it another 30 minutes or so. Nothing showed, so I made my way back to where I had parked, thinking about making a different approach the following night. This time starting at the neighbouring farm and ending up looking along the fence line. With a bit of luck, if I don’t pick it up on the neighbour’s ground, I hoped to time things right, catching it coming out from behind the fence into the field. The only problem would be I would have to skirt around the small wood to get in position, or I would be sky-lined with a double fence to get over that would not in its self be an easy task.

The following afternoon saw me out setting traps on a smallholding, not too faraway from where I was the previous night, so thought I would take my lamp and rifle along, JIC. This meant that I got to the ground earlier than I planned, so headed off a little higher up the banking and sat down with my back to the wood. I was sat with my shooting sticks at the right length, so could cover the area by moving them as required, without changing my position. I sat there until the light faded and all the patches of reeds looked like a fox, another 15-minutes and it was too dark to see without the lamp but not dark enough to use it. Ten minutes passed and with the rifle ready, flicked on my lamp, immediately picking up eye shine.

Switching it off, I brought the rifle up and switched on my gun light. It was what I had been waiting for; a fox making its way along the edge of a reed bed. With the cross hairs on its shoulder, it suddenly stopped and I touched the trigger and then the tell-tale thump of a hit. Picking up my pistol light, I located my prize; a really well-fed dog fox, one of the easiest I have taken off this particular farm. I have yet to find a better lamp and rifle combination than Clulite’s LED pistol light and the 3000 gun light, perfect for going it alone!