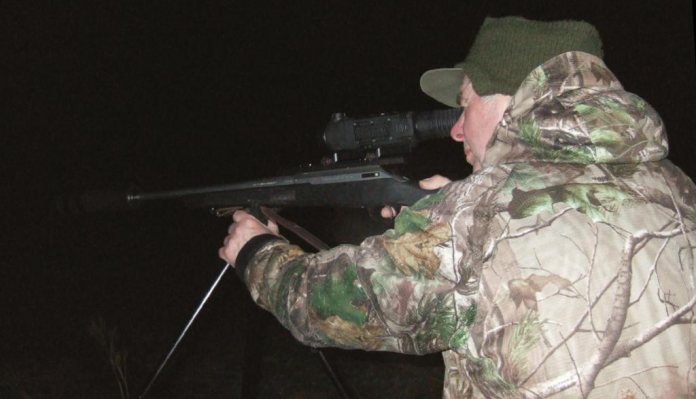 I have just completed my longest field test ever on a must-have piece of equipment, Pulsar’s Trail XQ38F thermal imaging scope, courtesy of Thomas Jacks (2017 December issue). I knew it was a fantastic bit of kit, when my friend and keeper, after checking it over, went out and bought both their Trial XQ38F and XP50 thermal rifle scope.

I couldn’t wait to try out the rifle scope variations, but after a little mix up and misunderstanding caused by me, I received my scope the day I was travelling south to try for a wild boar and kick start my field test. After arriving at my destination and meeting up with my friend Barry, we headed off to the range, as I was due out that evening. But being unable to zero my Tika 30-06, I had to settle for a bit of foxing, using my Tikka 243 fitted with my Maxi Kite NV scope, nothing at all went right for me!

I was sat in the hide, cursing at my misfortunes; requesting the wrong scope, receiving it late and changing our location twice due to the farmer turning the cows out in the field that we were trying to zero my rifle in. Add in problems following the instruction booklet, in short, I was not happy. Suddenly, I heard something twang. I raised my rifle, switched on the scope and there it was, a fox not 15 yards in front, heading for some bait I had put out; slipping off the safety, I touched the trigger and (bang)!

It didn’t sound or feel right, looking through the scope the fox was frozen to the spot looking round as much to say what the hell was that? I immediately unloaded, and examination showed my sound moderator was missing. I knew what I had done straight away, with me using the same moderator for my 6BR and my 243 I remember as I screwed on the moderator it not feeling right. I had used the wrong bush, so had not screwed the moderator on far or tight enough, so the firing pressure blew it off. I’ve heard of this happening to others many times and now me, not something I want to repeat.

After finding the moddy in the long grass I decided enough was enough, and packed up for the rest of the weekend, it was one of the worst things that has happened to me I could ever remember and one I want to put behind me. I have said many times before, mistakes happen, so if this tale helps you not repeat the problem, then it has had some use.

Putting it all behind me, three weeks later I thought of having another go at zeroing the thermal scope, this time on my Tikka 243 for foxing. Happy with the set up and with the right eye relief and more time to decipher the information booklet (which is my only gripe) which tended to jump around the pages a bit when it came to any detailed instructions. Saying that, just how do you zero a thermal scope?

It won’t pick up a normal target, as it works off heat coming off your quarry. Probably the best way is to fold a small piece of tin foil over a couple of times and fix it to your target and using that as your point of aim. Then, by leaving it for a few minutes, it quickly absorbs enough heat from the sun to give off a heat signature that the scope can pick up. Once I had zeroed my rifle/scope combination; my Tikka 545 in 243 Win and the Pulsar Trial XQ38f thermal imager scope. I enjoyed a little plinking at bottle tops wrapped in tin foil, put out at different ranges shooting down onto a peaty back stop during the day and small plastic bottles filled with hot water from a thermos flask late evening. To get familiar with the set up (a little too familiar) I was having fun and knew I would find it hard to send this great bit of kit back when the time came.

When I did venture out, I used it the same way as I do when my NV scope, waiting at a known pathway for fox with the rifle on sticks or bipod, looking through the scope periodically rather than disturbing the area by walking around. If you have the patience and know your ground, I find it’s the best way of bagging the wariest of foxes. The beauty of a thermal, unlike a conventional NV unit, is you can see through the thickest of cover, be it reads, grass or scrub by the body heat (there’s no hiding place) as one particular fox found out.

I knew it for the general path it was taking; I would pick up eye shine in various places sometimes in the wood others, as it crossed the field. Over a period of months, I found out it’s travel movements, but always lost sight of it as it neared the edge of a bit of rough ground, the lamp would bounce back off the vegetation. My Maxi Kite has no infrared fitted and would lose sight as soon as the fox entered the long grass and brambles.

However, armed with the thermal, I was able to track its every move, after crossing the open field it made use of every bit of cover there was through the bramble, keeping low down the wooded hill side, skirting along the edge of a pool. I could only guess where I would pick up eye shine again, near the top of the hill, I guessed, because I managed to stop it in its tracks on the edge of the pool; the only clear shot I could have taken, and only made possible with the Pulsar trail XQ38F thermal imager. My agreed loan period for this beauty was 29 August 2017 to the 8th September 2017; after a little reminder, I actually sent it back February 2018. Thank you, Thomas Jacks, for being so understanding!
Contact; www.thomasjacks.co.uk