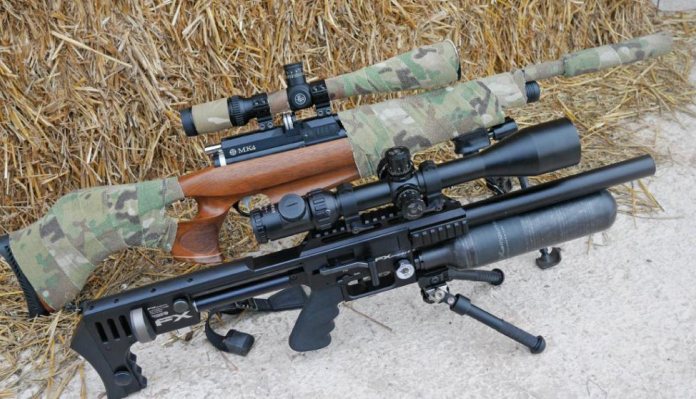 UK distributors Thomas Jacks recently sent me an example of the Accolade XP50, the latest thermal viewing device from Pulsar. As it was only a couple of issues ago that Bruce Potts gave you a detailed review of the Accolade, I thought I’d take a different tack and set its performance in the practical context of what turned out to be a devastating airgun raid on my local squirrel population.

Given its £4.7K price tag, you’d have to be an enviably well-heeled or an exceptionally dedicated squirrel hunter actually to buy an Accolade for the purpose, but of course that doesn’t mean you can’t make good use of one you may just happen to have on hand (thank you TJs!)

My friend James and I do most of our shooting with centrefire rifles or shotguns, but, ultimately, it’s all about choosing the right tool for the job, and the most urgent job we had on-hand was making an observable impact on the hordes of jackdaws and crows that were descending daily on the dairy farm that is our all-time favourite permission.

Every year, the population surges over the summer, but this year an evidently successful breeding season, followed by an extended spell of bone-dry weather in June and July that reduced the amount of food available in the woods and fields, produced the perfect storm, complete with clouds of corvids several hundred strong.

I’d started my campaign with the shotgun and decoys. Initial results were encouraging, but soon each sortie produced a smaller bag, and after a dozen goes I was little more than a glorified bird-scarer: one shot and they all headed off to vantage points across the boundary, to sit it out until I pulled stumps.

The answer was to go covert. So, I got out my FAC air rifle and my Bushwear chair hide. I found the perfect spot for the hide, tucked in under a hawthorn bush across the way from an oak tree that the corvids love because it provides them with an ideal perch from which to plan their raids into the cow sheds and feed clamps.

The hide was already masked by a natural screen of nettles in front, but once I had added a couple of ghillie-strip hide nets, wrapped the front end of my rifle in McNett Camoform tape, and zipped up the shooting port so that it was barely wide enough to cover the tree, I had a genuinely undetectable lair.

The range to the tree was a full 60m. Too far for a sub- 12FPE gun, but very much in the sweet spot for my 30FPE Daystate Mk4, and a long, steep-sided and thickly-wooded dingle behind meant that any .22 pellets that carried on past the tree would fall to earth without danger to livestock or people.

It worked like a charm, and over two weekends I shot over 200 corvids out of that tree, 98 on one extraordinary day alone. Success on this scale even convinced James to put an air rifle on his ticket, and he did so handsomely, adding an FACrated FX Impact to his arsenal. This put a deadly gun on each side of the farmyard, accounted for another hundred or so birds, and left the rest distinctly jittery, since now they could see their fellows fall, but without being able to detect the cause.

All this was a lot of fun, but the point of the tale is that it left James and I about as sharp and up to the mark with our air rifles as we may ever be.

In the course of our corvid offensive, the farmer put up a new open-sided cow shed, and by mid-August he had filled one half of it with straw bales. This gave us a new, not to say sheltered and spacious, vantage point overlooking the paddocks at either end. The paddocks themselves are bordered with a full-house of fruiting bushes and trees: beech, cherry, chestnut, elder, hawthorn, hazel, and oak among them, making them a magnet for squirrels, especially at this time of year.

So, when a wet Sunday was forecast, we decided to leave the corvids alone for a day and make the most of the sheltered comfort of the barn to knock the squirrels back a bit.

This is where the Accolade comes in. Just in case you haven’t read Bruce’s review, or looked one over on Thomas Jacks or Scott Country’s stands at the Northern Shooting Show or the Game Fair, here’s a quick run-down.

The Accolade uses the same objective lens, sensor and screen as Pulsar’s top-of-the-range Helion XP50 monocular, but it packages these within a wider housing equipped with two binocular-style eyepieces. These can be individually focused, and the distance between them adjusted, to give a perfect view of the screen with both eyes. The controls, meanwhile, are literally at your fingertips.

As the happy owner of a Helion monocular, I have to confess that when the Accolade was announced I thought it was a solution looking for a problem. Nevertheless, using one for an extended period in the field has turned me into a fan. As well as being easier on the eyes, and easier to hold steady, the image just seems better. Sharper. More ‘contrasty’. My only niggle is that Pulsar have made the neck strap too long and the shoulder strap of the carry case too short!

Now James and I are prone on the bales. He’s got his smart new Impact set up on his cheap-aschips Adras bipod and his drop chart stuck inside his rear lens cover, and I’m doing spotting duty with the accolade and my Vortex rangefinder, now set to yards, as James hasn’t gone metric yet.

In no time at all, I spot a radiant white silhouette on the Accolade’s screen: our first squirrel. I call it: “57-yards, 2 o’clock, big oak tree, half way up, just left of centre.” “On it!” James replies. The truth is that James used to take so long to make a live shot that his quarry was as likely to make a leisurely exit as it was to catch a bullet! But the accuracy of the Impact, and the sheer amount of practice he’s had with the rifle have changed all that, so, a bare second later, there was a muffled report next to me, a loud ‘thwock’ downrange, and the satisfying spectacle of a stone-dead squirrel tumbling out of the tree. “Your turn,” he said with a grin.

Switching roles, I picked up my Daystate and James grabbed the Accolade. Soon afterwards, he spotted three squirrels chasing each other around the trunk of a dead tree a couple of metres back into the wood. “46-metres,” (I work in metric). I applied the necessary hold-under (I’m zeroed for my 60m corvid tree) and waited for the right shot.

Finally, a head showed and paused. The pellet flashed as it sped into the shadow of the wood, curving into the spot between eye and ear, and the squirrel dropped. A quick stroke of the bolt and I was ready just in time for another chance, and a second head-shot followed. “Where’s the third one?” I hissed, eager for the triple. “Buggered off,” came the reply. “Fair enough”, I thought.

Rolling over to reclaim the Accolade, my back reminded me that prone shooting is a younger man’s game and I decided to get my carp chair and trigger sticks from the back of my 4x4, which was parked at the foot of the ladder we’d used to access our firing point. Before I’d taken three steps, I spotted another squirrel sitting on a fence post on the other side of the barn and called James over. “35-yards.” Thwack! One more in the bag. Then the inevitable: “Grab my chair while you’re at it, will you?”

Having arranged ourselves more comfortably, and after a short break for coffee, cake and sandwiches, we were back in the action, and soon had another three squirrels without a miss. It was a perfect day for hunting with the thermal, as the heavy drizzle was chilling everything without a pulse, making the foraging squirrels, which in previous weeks had been almost impossible to spot against a backdrop of sun-drenched foliage and timber, stand out like beacons against the dull grey woods.

Spotting them in the Accolade was one thing: picking them up in the scope was another, especially since James often says “right” when he means “left” and can’t always tell hazel from beech. I realised I should have started the session by drawing up a range diagram, marking out each tree, bush and fence post for quick reference, but by this stage we’d got a workable nomenclature going.

All the same, with the constant movement of the leaves in the trees, the deep shadows behind them, and the grey squirrels’ amazing ability to blend in with the branches, it often took a good deal of work with the scope to find animals that had been so easily spotted with the Accolade, so each engagement was usually accompanied by a running commentary from the spotter, and much passing back and forth of the Accolade, before the decisive moment came. Great fun!

I’ll wrap up with the best shots of the day. James’ was from the very top of a big beech tree, at 59-yards. Whenever this particular squirrel stopped it was always screened by twigs, and out of cover it was always moving. To make matters worse, there were two other squirrels in the same tree, which would intermittently offer better shots, only to fade back into cover as soon as we switched target. Sensibly, James resolved to focus on just one, and chose the top squirrel. After at least 5-minutes of intense concentration, his perseverance was rewarded when the squirrel froze for a moment as a buzzard passed overhead. The pellet found its mark, and the squirrel took the longest dive of the day, scattering the beech mast as it hit the ground.

My best was less dramatic. The squirrel was sitting still but deep inside the canopy of an oak tree. Eventually I picked up the arc of its tail and the curve of its haunches in the scope, the rest of its body being concealed behind a stout branch. I waited. It shuffled forward, further out of sight. Again. Then I had an idea. Pulling out my fox call, I gave a couple of gentle squeaks. The tactic worked: a head popped out from behind the branch and the pellet impacted straight between the eyes.

Then James had to go, but I stayed on and accounted, in quick succession, for the other two squirrels in his beech tree. A quick WhatsApp to give him the good news, and it was time to pick up. The Accolade was invaluable for this too, detecting the cooling bodies amid the damp vegetation, and enabling me to locate three that had been caught by the branches before they could reach the ground. I recovered nine bodies, for a total tally of twelve, from fourteen shots, all taken cleanly and showing full penetration thanks the extra grunt of the FAC-rated rifles. All told, a pretty good way to pass a few hours on a soggy August Sunday.