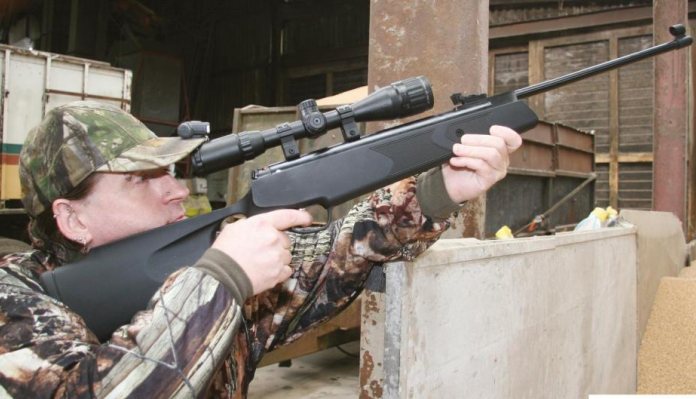 From the outset, I’ll mention that all rifle types ‘featured’ are (obviously) available in different calibres, but I’m using the popular .22 to illustrate the whys and wherefores pertaining to each gun’s performance capabilities and effective killing range. Then, giving the pros and cons for each, so if you’re considering going up or down the ‘power ladder’, you’ll be fully informed as to what to expect!

Virtually all shooters become ‘hooked’ on our sport due to shooting an air rifle when younger. It can be break-barrel, side or under-lever action (cocking), be spring, or gas-strut driven. Or, if a precharged pneumatic (PCP) it’ll be bolt action, sidelever and single or multi-shot system.

All legitimate vermin the 12ft/lb airgun hunters allowed to shoot are listed in the 1981 Wildlife & Countryside Act. These include rabbit, squirrel, brown rat, magpie, crow, rook, jackdaw, jay, wood pigeon, feral pigeon and collared dove. Immediately this shows the ‘off ticket’ air rifle is very versatile and has a myriad of pests it’s deemed suitable to dispatch.

Typical examples where it’s best suited, is when culling feral pigeon or rats around outbuildings and in woodland dropping squirrels and avian pests from tops of trees. In many situations, you can’t use a shotgun, due to the damage stray shot can do and the noise generated. A rimfire in these situations is totally out of the question, due to the power of the round and aimed upwards, if you miss, that 40-grain lead bullet goes a long way. However, a pellet fired from a 12 ft/lb air rifle is more than enough stopping power for tree rats and egg thieving, if you hit the quarry’s ‘kill-zone’.

As an example of its effectiveness and ‘to keep in mind’ as you continue through this article is this: the rabbit is a species suited to the hunter using a rimfire or air rifle and can often be encountered well within 40 yds. Within that range only 4 ft/lbs of energy is needed at the kill-zone (headshot) to ensure a clean, clinical kill. Suffice to say, successful sport shooting or vermin control isn’t all about power.

30-40yds. In the right hands, capable of clean kills out to approximately 50 yds

Of all firearms, this is the most misunderstood and most specialised weapon featured. Obviously, you need to apply for a Firearms Certificate (FAC) before purchasing one and have a gun cabinet fitted according to Home Office guide lines. Don’t be deterred because you need fill in the relevant application (Form 101), if you can satisfy your local Police Firearms Department you are a fit and suitable person to own one, it’s just a matter of going through ‘due process.’ And after your initial application, a visit by your Firearms Liaison Officer (FLO) who will ask general questions on home security and the need for a gun cabinet.

The FAC air rifle to some extent ‘bridges the gap’ between legal limit (12 ft/lb) air rifle and a rimfire. A .22 calibre air rifle running at 40 ft/lbs of muzzle energy, may sound impressive, but is only starting to nudge up to a .22 Long Rifle sub-sonic bullet running at a muzzle energy of 105 ft/lbs. However, they offer that bit more power for certain situations and there’s a much-reduced ricochet factor too.

Mechanically operated hi-power springers produce more recoil to deal with, resulting in less accuracy. With the recoilless PCP power source, this is where you really appreciate the capabilities of the ‘extra-oomph!’ A very important aspect of hi-power and indeed legal limit air rifles is the need for an efficient sound moderator, as muzzle crack is very loud. Also, you need provision to own one and for it to be included on your FAC when you are granted it.

Choosing the rifle itself can become an issue because you don’t want to make a costly mistake. Most FAC-rated air rifles won’t hold value bought from new, as resale is very much a buyer’s market, who must have an FAC and suitable permission to possess such a firearm. I advise trying a used model first, then if smitten, you’ll have as many as me but if you’re set on a new rifle, be warned that as with buying a new car, leave the ‘showroom’ and your new luxury ‘boy’s toy’ becomes an expensive indulgence.

The FAC air rifle may well be a specialised tool and have specialised uses, but when the need and hunting situations arise, the rifle fulfils its roll admirably. These days, there are now some very interesting large calibre models available and power levels hitherto unheard of!

If there was ever a gun that could be termed ‘general-purpose’ in areas that it’s deemed suitable to use, then it’s the rimmy. Without doubt, it can handle a plethora of pest control duties and is available in any number of action configurations: boltaction, single shot, semi-automatic, lever-action and pump-action.

Pest control is the objective and reason we’re allowed to shoot quarry deemed vermin but there’s no denying the sporting element that attracts us all. However, they also offer fun and practice on the range and ammunition is cheap compared to its larger centrefire types. For our purposes, sub-sonic, hollow point ammo (around 1000 fps) is the best bet. You will of course need a moderator and there are plenty to choose from that won’t break the bank and when fitted makes for a very covert firearm. You can also get medium, high and hyper-velocity loads, but these are louder and often not as accurate as the slower stuff.

Although rabbits are often the main target for the rimfire hunter, they aren’t by any means the only pests suited to it, as it’s very effective for dealing with crows and other corvids. Place bait out at 50, 60 or 70yds and shoot from a concealed shooting position such as a hide or off-road vehicle and you’re a silent threat to any corvid foolish enough to think they’ve found a free meal. And what of the times you encounter the fox on your morning or nightly rounds. Though to some a contentious subject, the .22LR is enough gun to cope with Charlie at sensible ranges but a precisely placed headshot is needed.

There are other calibre choices with both 17 and 22 Magnum cartridges that give considerably more power than a 22 Long Rifle and are a better bet for foxes. You can even get switch barrel rifles that allow the use of more than one calibre, such as CZ’s 455 and Sako’s QUAD.

There are also the few times that you may need to tackle Charlie on land not passed for a centrefire but is rimfire approved. These can become havens for foxes because the local dedicated foxers don’t or indeed can’t patrol these areas. However, be skilled and proficient in marksmanship, as you should be, and it’s the ideal tool for the job.

Out to 100 yds approximately

If you are content to hunt at 12 ft/lbs, then there’s no point going ‘into FAC territory.’ Then again; if you want to broaden your shooting horizons and experience air rifle hunting to the absolute ‘max’ and eventually move into firearms shooting disciplines, then go for it.

But consider this: Many firearm shooters see little use for the FAC power air rifle but ironically realise a quality off ticket 12 ft/lb air gun will fit nicely in their armoury and broaden their ‘shooting experiences.’ Our Editor (Pete Moore) uses a 30 ft/lb FX Wildcat, as he says that for certain pest control situations it’s a better and safer bet than a rimfire. He also runs an HW110 12 ft/ lb gun and he equally likes that!