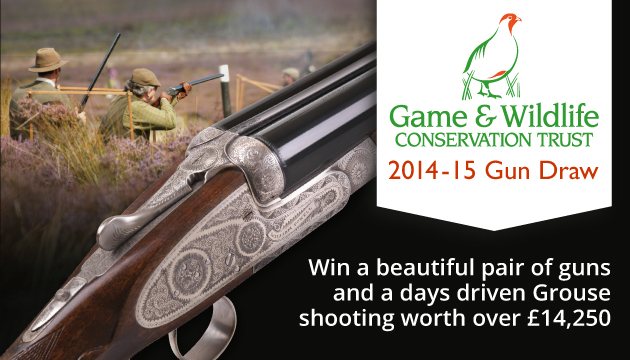 William Powell have joined up with the Game & Wildlife Conservation Trust (GWCT) to give you the opportunity to win a beautiful pair of guns worth over £14,250,  as well as a day’s driven Grouse shooting courtesy of William Powell in order to help the Game & Wildlife Conservation Trust (GWCT) raise money to promote the importance of boosting biodiversity through shooting.

William Powell have been making shotguns since 1802 and many consider their guns to be the equal of those made by the famous London Gunmakers. Increased production costs in the 20th Century meant that it is almost impossible now to make a high quality shotgun in the UK, which most ‘normal’ shooting people can afford.

This resulted over 25 years ago in William Powell forming an arrangement with Arrieta, the largest of the high-quality Spanish Gunmakers, to make guns for them. These guns are not standard Arrietas which are badged William Powell, but guns which specifications have been designed by William Powell and working with Arrieta, they have produced a range of side-by-side shotguns which ideally suit the game shooting market at a fraction of the price of a new English gun.

Over the last 15 years GWCT research has shown how much valuable management goes on in the British countryside, much of it not at the taxpayers’ expense. Habitat is retained, managed and created for wildlife because of game management which seeks to control common predators and provide supplementary food in the long hungry winter months. Funds from this draw will help to capture and encourage the very best conservation practices across all shoot sizes to maximise the net gain in biodiversity in our countryside.

Enter the GWCT Gun Draw and help the GWCT produce and publicise research on the true benefits of good game management.

TERMS & CONDITIONS
The draw is limited to only 2500 tickets, putting the odds of winning at 2500 to one. Tickets are sold in aid of the Campaign4game and are priced at £50 each, issued on a first come first served basis.

You can buy your tickets online at: www.gwct.org.uk/gundraw or by completing the entry form in the Autumn/Winter 2015 Gamewise Magazine and sending the form to the address below.All entries must have been received by 5pm on Monday 14th December 2015 at GWCT, Burgate Manor, Fordingbridge SP6 1EF.

The draw will take place on Thursday 17 December 2015.