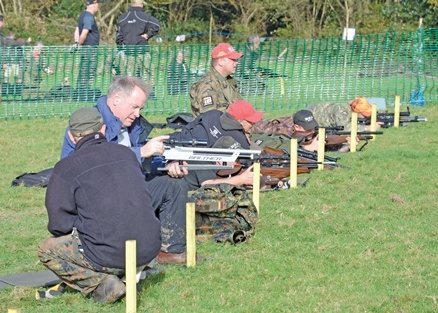 National Hunter Field Target competition rounds are roughly one per month, which works out pretty well, since it gives us a few weeks in between, to practise, investigate any problems, and experiment with new kit. Yet with round 8 held in Cambridge, at the tail end of September, followed by round 9, at Buxted in Sussex only a few weeks after, it has seemed busy of late!

The Cambridge club, based in Shepreth are well known for their varied target layout! With the usual mix set over woodland, and even a section across the unprotected dry mud of the field, wind direction and terrain all had to be taken into account. I managed a 55 on the day, which as it happened was highly respectable and as the first time out with my Air Arms FTP900, I was left quite heartened. Especially as a freak incident with dirt in the side lever, had ruined my concentration at the start!

Barry Smith shot solidly with his BSA, to take the round, with an excellent 58, proving that his slow progression in scores of late has been no fluke. Top shot, Richard Woods, was another notable score, and his recent switch to using a British made Impact Airguns GSX600 in place of his Steyr, has caused quite a stir. So 3rd place overall with a 57ex 60 was a good start in anyone’s book!

Generous sponsorship on the day, from Hull Cartridge, kept everyone’s attention in the raffle, and a very happy John Miller, walked away with a brand new Weihrauch HW97K Blue Laminate version for his trouble. A very nice prize indeed.

I’d never been to the Buxted club set in lush Sussex countryside near Uckfield, and the entrance into their field was enough to put anyone off, requiring a drop down a slope, into six inches of sloppy mud. Not the best of starts, but once inside, we were treated to another excellent layout of targets, which had been cleverly set out to test the amassed enthusiasts.

Shooting over a stream into dense woodland then navigating an open field section, all the time trying to calculate distance and wind speed, kept us all on our toes, and several experienced shots fell by the wayside. Stuart Farr took the open class with a superb 58 on the day, but a clear signal of intent came from young Rudy Goldslade, who has continued to show us how it’s done, ever since taking the World Championship at the beginning of the year.

Rudy still shoots as a junior, but steering his FTP900 to a 58ex60 at Buxted was a marvellous result - proving his grasp of the sport and sending a clear message to the rest of us!

Rifle customisation is all part of the fun, and Rudy has modified his FTP900 by removing the internal rack, barrel bracket, shroud and muzzle assembly. For him this trims vital weight from the gun, and his results suggest that it now suits him very well indeed.

Claire West and Alan George from Air Arms, were on hand in the afternoon at Buxted, to not only show off their fabulous new HFT500 model to drooling enthusiasts, but also give one away as a prize in the raffle. Andrew Burgess was the lucky recipient, and his surprise and joy capped off another great days sport.

One final point concerns next year’s World HFT Championships; again to be staged at Kelmarsh Hall, near Kettering.

Interest in this flagship event seems to grow significantly year on year, and entries are now being taken. At the time of writing, 170+ competitors have already registered, and with a total entry book of around 320 shooters normally accepted, it doesn’t pay to leave any applications to the last minute.