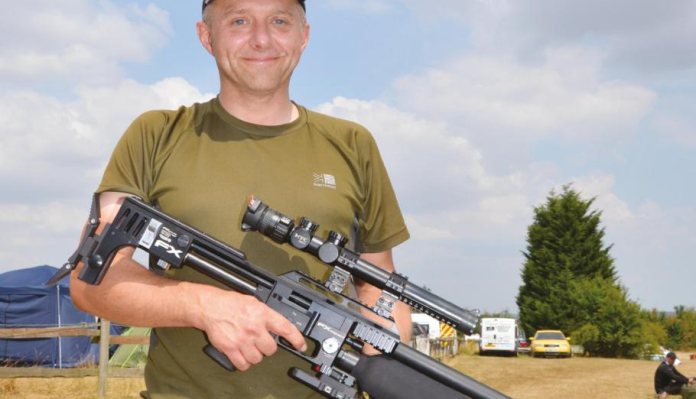 ow! Sizzling temperatures regularly in the 28, 29⁰ area and even occasionally into the mid 30’s, has had many of us operating at half speed this Summer. So, when we have had to try and navigate a national Hunter Field Target course, on the odd weekend, it’s been hot work indeed. Hardly the best time to don the latest Air Arms Hunter Field Target Team gear either, slickly designed as it is! I, for one, can’t shoot without wearing some type of jacket, but these recent temperatures have set me questioning that approach, as many shooters just wear in a T-shirt and have done with it.

A double shoot over the weekend, mid-July, saw again, soaring temperatures, and this time, the Maldon & District crew played hosts. We always get superbly challenging courses here, but with much of the action set inside the wood, we did at least have some respite from the blazing sun. Out on the open hillside/field section, reading the tricky wind was the key, and here, I did OK, only to take a zero on my very last target- the thin bird. The ‘thwock’ as the pellet hits wood is never a good sound, but whilst Simon Vant (eventual winner) and Mark Kirby, (clear second), both showed off with superb 58s apiece, plenty of top-end shooters took a hit with the wind.

But even I didn’t expect to be using a mini tornado as an excuse! Oh yes; just as we finished our round on the field, and were preparing to walk back into the wood, my cap flew off my head and straight up into the air and into a twisting spiralling vortex of wind. Next came a plastic dustbin full of empty plastic bottles; up in the air, dustbin and all, twisting round and round, and then off over the hill. But the final piece of theatre came, when the Marshall’s entire gazebo was wrenched from its moorings, and soared high up around and around, joining the vortex column and then coming towards us, with legs flailing! I was high tailing it to the woods by now, so how Anwar Ghazi had the presence of mind to film everything on his phone I don’t know. Apparently, it’s viewable on a Facebook link from the M.A.D. Website, and very entertaining!

Anyhow, well done to Mr Vant, and congratulations to Gordon Burns, who won a TX200 in the raffle, generously sponsored by the Airgun centre.

Come the second day, and Chinese whispers had a few shooters expecting to see me terribly disfigured by a wayward gazebo! A largely new target course awaited, and with heavy heat again on the cards, the fact that the majority were shielded inside the woods was a godsend. There were of course plenty of small kills and range traps to catch the unwary. Tom Willingham, new to the adults open class this year, posted 56 on each day, which is impressively solid and consistent, but and despite just missing out in the rankings, his efforts were amply rewarded by winning a Weihrauch HW110 rifle in the raffle!

Result-wise, as it panned out, the Sunday belonged to one of the country’s top shooters, Richard Woods, who top scored and saw off his rivals in style.

Hunter Field Target is a fantastic sport, that gives many of us a great deal of pleasure, but one aspect which perhaps needs highlighting, has come to light of late, as I’ve heard mutterings about shooters sharing information, about target distances, and overly discussing their approach. In short, a sense of fair play must be born in mind.

Now of course, when we are helping newcomers and novices, it’s essential to give advice and help them find their feet, but when shooters are well-established and know the ropes, it can be deemed as unfair to work as a team in this way. Adults mentoring youngsters can be part of this, and again full training and advising is understandable at the early stages. But once they reach a high level, and are even winning silverware, this ‘team’ approach should perhaps take more of a back seat.

The HFT Master’s shoots take the view that we can bowl up and shoot with our club mates if we want, which admittedly can make the day even more enjoyable, but is perhaps more open to abuse. Being mindful to compete as an individual, rather than pooling information along the way, especially, as mentioned, once results are converting into wins, must be the best approach.

For pre-booking application forms and downloads regarding established UKAHFT events (where bookings are possible), and all the latest information on anything connected with Hunter Field Target shooting, look at the following websites: https://sites.google.com/site/ukahft/ and www.shooting-the-breeze.com https:// sites.google.com/site/whfta1/ In addition, details of HFT Master’s events can be seen at www.hftmasters.com and www.whfto.com