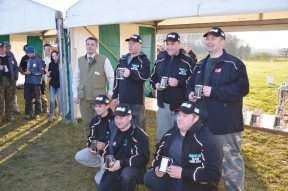 If you really are that keen, there’s a season warm-up event, winter leagues, and an Extreme HFT series, to keep everyone busy over the quiet part of the calendar. But for me, getting up super early, on a freezing winter’s morning is a terrifying prospect these days. Basically, I stay local for the duration, so when the World Championship comes around at Easter, it’s pretty well my season opener, and I’m champing at the bit.

This time round, I wasn’t the only one either and with a healthy contingent from my two local clubs, all signed up and raring to go, the sense of anticipation made for an exciting build up. The ‘Worlds’ are our flagship event and represent the unofficial start to the season; and with a full entry list of 360 competitors, from all round the globe, all converging on the rather beautiful Kelmarsh Hall, it’s difficult not to get a little over excited. As usual, the Championships were being staged as part of the Kelmarsh Country Fair, and with the show organizers, Countryman Fairs, again one of the main sponsors, along with Great Wall, Air Arms, Sure-shot Airguns, and JSB, we had much to look forward to.

£4000 in cash prizes and a generous spread of goodies, including an HFT500 from Air Arms, provided a brilliant fall back, if our scores should fail to impress. Pellet Clams from Steve Edmiston, and an FT Ultra stock from Sure-Shot Airguns, were also up for grabs, and all we had to do to be entered, was remember to hand our score card in.

With two superb target courses awaiting us in the woods and dry weather finally forecast, it was all looking good. Getting the range right as always is the key with HFT and with a plethora of trees and foliage creating the tunnel effect, and some canny little tricks from the course builders, the task was never likely to be easy.

Day 1 was overcast, but with almost no wind, scores were always going to be high. I knocked in a healthy 55ex60 and should have been satisfied, but for a hatful of discipline shots missed and an uncontrollable shake on the last target! Never mind. My overnight hotel stay was assured the confidence boost of a solid first day’s performance in the bag. No fewer than six shooters showed their intent with an excellent score of 58 however, so the title was clearly going to be hotly contested.

ALL TO PLAY FOR

Day 2 arrived, and just as forecast, a teasing breeze was building steadily. My hesitant start, and strange lack of confidence, was compounded once I ran into a tricky cross wind, and with a horrendous run of plates in the mid section, I had my work cut out to have a score that even started with a five! However, several big names around me were floundering as the elements played their part in weeding out the pretenders. I had to take comfort for a strong finish; all too late of course, as my campaign disintegrated before my eyes.

Elsewhere, some notable efforts were making the headlines. Simon Vant posted the highest single score of the weekend, with an excellent 59ex60, using his Impact GSX600…..but at close of play, the weekend belonged to Vince Holland. Two superb scores of 57 and 58 saw off his nearest rivals, and the trophy was secured without so much as a shoot-off!

Congratulations to Vince, and thanks to all who contributed to such a great event.

As it stands, the World Hunter Field Target Championships are an open event, with no prior qualification necessary. You just need to log onto the website, download the forms, send off your payment and you’re in! I can’t help thinking that some form of qualification would undoubtedly add an extra level of excitement; but as for the logistics of implementing such a system- that’s a different matter. Consider that the vast majority of participants in HFT are still within the UK and it soon becomes clear that arriving at any fair and meaningful system where qualification rounds are used is currently all but impossible.

So, with the dust settled on another championship, it’s time to look ahead to the main season; where a greater number of events are available to compete in than ever before. If you’re like me, you’ll have a list of local club shoots to work around, but the new HFT Masters events are also helping to fill the calendar- meaning there’s almost a competition to attend every weekend.

I’ll be at the first HFT Masters, staged at my old club, Lea Valley, just outside Hertford, in early May and it should be interesting to see how it pans out. Just a week or so after comes the UKAHFT double weekend at Fort, which is always a great excuse to see the glorious scenery of the North Wales border. Next month I’ll report back on both these events, so until then, enjoy HFT!

For pre-booking application forms and downloads regarding established UKAHFT events (where bookings are still possible), and all the latest information on anything connected with Hunter Field Target shooting, take a look at the following websites: https://sites.google.com/site/ukahft/ and www.shooting-the-breeze.com https:// sites.google.com/site/whfta1/

In addition, details of the new HFT Masters events can be seen at www.hftmasters.net