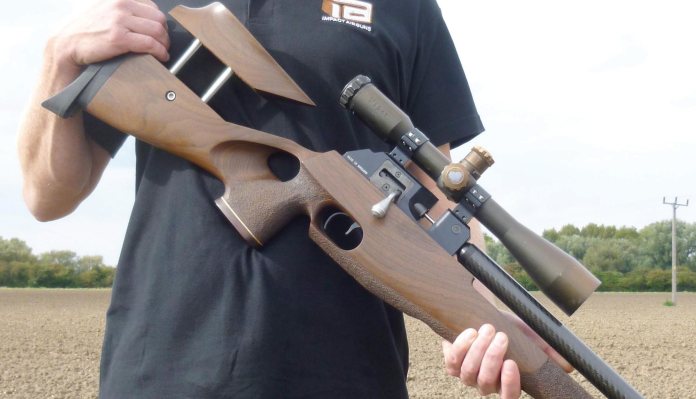 Well, here we are again, as another 12 months have simply zipped by; and it’s that time of year when we look forward to the start of another competition season. This year the excitement and anticipation is well and truly heightened, since the main opening event is none other than the biggest title in the sport! Yes, it’s all eyes on the rather lovely Kelmarsh Hall in Northamptonshire and the 2015 World Hunter Field Target Championships. The Kelmarsh Country Fair, hosted by Countryman Fairs, is again the backdrop to the event, and the whole arrangement has worked really well in recent years. A genuine contingent of foreign shooters, from all around the globe now attend this shoot and with many visiting teams wearing special matching jackets and other kit, there’s a special atmosphere at this event like no other. Each shooter tackles a 30-target course on each day, and an aggregate of the two forms the overall score. Posting a good score on the first day keeps things exciting, but it can all go spectacularly wrong.

Just taking part is enough for many, but for others, it’s the culmination of months of preparation, practise and hard graft; and the stakes are high.

Like many sports, Hunter Field Target has had its fair share of top performers that have ridden the wave, and managed to sustain a high level over several seasons. Yet analysis of results over a period of time, show a slow shift in power; inevitable in any sport, and it makes for interesting reading.

Pete Sparkes has been a major force in HFT from the start, maintaining a grip on the proceedings for quite some while. Yet last season saw him slip down the rankings. He’s a wily competitor though, and I’d still have him down as top ten, come the big weekend.

Richard Woods is a class act too and having made the switch to using an Impact Airguns GSX600 late last season, managing a second place in a national round, at the first time of asking if you remember, he’s got to be in my select band of hopefuls. If he’s in the right frame of mind, he’s certainly got what it takes to go all the way.

Barry Smith is a name that’s moved swiftly through the ranks, using his trusty BSA and I’d be surprised if he’s not kitted out with one of the new Goldstar HFT models by the time the Worlds comes round; factory tweaked and ready to go. BSA have been a bit slow getting this model out there, but they’d be missing a trick if the Goldstar isn’t out by Kelmarsh. There’s suddenly a cluster of top shots getting results with BSA models and the level of competition has really added to the excitement on the circuit.

Mark Wilson is another shooter who made a big impact last season, using his beautifully customized Air Arms EV2, and his confidence and obvious natural talent could break through again if he keeps his cool. Last season’s overall winner of the National Series, James McLachlan, will more than likely break top five, as will previous champions, Pete Dutton, for his consistency, and Tony Archer for his dogged approach.

But who would bet against young Rudy Goldslade; simply one of the most consistent shots on the planet right now? Ever since winning last years World Championship, Rudy has hardly relented, taking silverware at every opportunity. He’s a great ambassador for the sport too, and a shining example of the open door that awaits anyone, who has the skill, grit and determination, regardless of stature, sex or gender. His ability and super calm exterior has upset rivals up and down the country, and if he’s on form come Kelmarsh, we’re in trouble.
Scared? I think we should be!

Having the mindset to close out the deal, and finish the job, is what it’s all about at the top, and it really comes down to who can keep their bottle at the end of the day. I would estimate that of the 360 in attendance, the number who possess the ability AND are in the right frame of mind (therefore putting themselves in with a chance on the day), probably comes down to about thirty shooters. Having a top class, super consistent, absurdly accurate rifle, is just part of the formula!

Having checked the dedicated website for the Worlds, whilst compiling this piece, I can confirm that just a few places remain in the entry list. The full 360 compliment will probably be taken up by the time you read this, and that’s an impressive number to say the least! I for one can’t wait for this years event, to kick start another exciting season, and my FTP900 is ready and waiting! Fingers crossed!

For all pre-booking application forms and downloads regarding competitions (where bookings are still possible), and all the latest information on anything connected with Hunter Field Target shooting, take a look at the following websites: https://sites.google.com/site/ukahft/ and www.shooting-the-breeze.com https:// sites.google.com/site/whfta1/