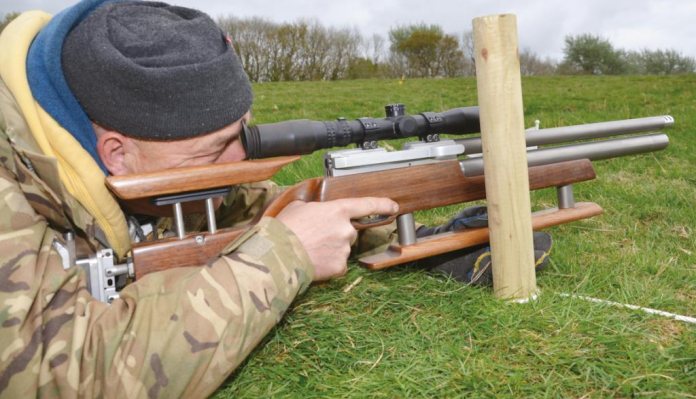 The 2019 HFT season is now up and running and, with the first UKAHFT National round at Misfits luring us to some breathtakingly beautiful Leicestershire countryside, it was a great start to what promises to be an exciting season.

Misfits are based just outside of Oakham and, with Rutland Water one side, and lush, rolling landscape all around, it really is a stunning part of the country. The club are a real band of enthusiasts and have quickly built a reputation for superb target layouts. Part of the attraction is the sheer variety, of landscape to play with, and this visit was no exception, with the majority of the course laid out around the wooded area, with targets spread around the bluebells, and then two different field sections. Of course, free from any protection of undergrowth, these field-based targets were to prove many a competitor’s undoing, as terrain and windage took its toll.

I had one of those total mystery shots, where I scored a zero, yet felt no wind or had any reason to suspect any foliage had been clipped along the way to the target. This was deep in the wood. Quite disconcerting, and despite faring well on those field sections, my bread and butter wooded shots let me down. Some surprisingly low scores were doing the rounds, as various big names got caught out, for one reason or another. However, two shooters emerged with astonishing scores of 59 ex 60 apiece!

Elliot has proved himself a top player over the last few seasons and, speaking to him afterwards, he was really satisfied with a good morning’s work, knowing that his round one percentage was unlikely to be beaten. Joining him at the top, was cool customer, Mr Charles Peal, who is not only one of the unsung heroes, helping with stats and shoot organization, but also fronts the Air Arms HFT Team. Keeping the faith with his trusty FTP900 has certainly paid off, and Charles is another top shot who has reaped the rewards of all his hard work in recent seasons. Misfits was to be his day, as it happened, by default, as Elliott had to leave early; hearty congratulations to both though, for simply superb shooting.

As the HFT season gets underway, it’s at this point that we need a timely reminder about power levels, as it is all of our responsibilities to check that our airguns comply with the relevant legislation. In the UK, we work to a 12ft/lbs kinetic energy limit and making sure that we stay below that is of paramount importance. This obviously applies to hunters too, as getting stopped by police and having your gun power tested, and found to be over the limit, can open a real can of worms, to put it mildly! Chronographs are readily available these days, so there really is no excuse for us not to be in control of the situation. Make sure that the gun is set up with a safety margin, i.e. comfortably lower than the legal limit, and it won’t be too easy for it stray over.

HFT shoots regularly test competitor’s rifles and, if they are found to be over the limit, then they can be disqualified for the day. National Round 1 at Misfits had a chronograph stage set up, in the usual format, and the velocity is checked with the shooters gun, to see that it doesn’t exceed the maximum figure specified with the specific pellet used. Take one of the most popular pellets, JSB Exact, or Air Arms Diabolo Field (almost identical in dimensions), at 8.44-grains, the maximum velocity permitted would be 800fps. Set it to shoot at 795fps, and it is extremely unlikely that any airgun would stay within this limit, given normal degrees of variation. Set up a premium quality airgun at 780fps, and you will be hard pressed to notice any change in performance, yet a safety margin has been set. Stating the obvious, but it avoids all the upset of being kicked off a shoot, and it keeps us whiter than white in the eyes of the law.

Time called on the masters?

Surprising and sad news for competition shooters, came earlier in the month, when we heard that the HFT Masters series of competitions for 2019, has now been cancelled, with the exception of the one event held at the Northern Shooting Show. Apparently some confusion with sponsorship was to blame, but I for one, hope to see the Masters resurrected next year, as it’s surely no bad thing to have additional shoots and choice of venues. There’s still plenty going on though, so here’s the big events for 2019:

Round 2 19th May Cambridge

For pre-booking application forms and downloads regarding established UKAHFT events (where bookings are possible), and all the latest information on anything connected with Hunter Field Target shooting, take a look at the following websites: https://sites.google.com/site/ukahft/ and www.shooting-the-breeze.com https://sites. google.com/site/whfta1/ www.whfto.com