Its a M.A.D Worlds 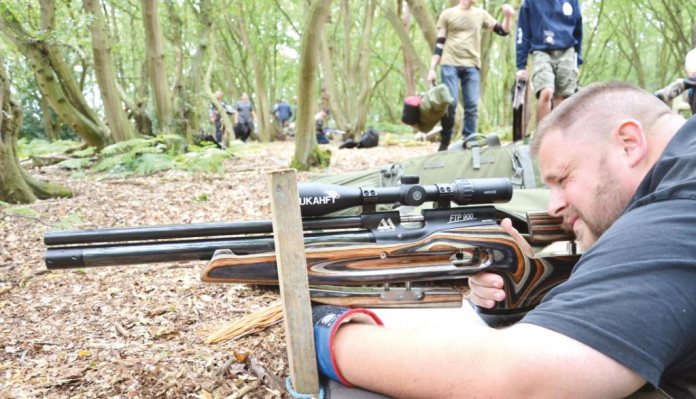 Venues can can make a big difference in sport and there’s not always logic to it. I’ve been to certain shooting grounds over the years, where decent results have been hard to come by, while others have been the scene of major celebrations, so I suppose it all makes the sport we know and love. Having reliable kit is a prerequisite, but local conditions and terrain can dictate the pace on occasions. Mastering particularly tricky wind for example, can just make a certain club ground very challenging and all the more satisfying when it does all come together.

Come mid-July and we had the popular double UK National rounds held at Maldon & District (M.A.D.) in Essex, and this club really know how to stage quality shoots. I’ve had very mixed results here, but also my last major win, so it’s always one I enjoy. The Club happens to have more than its fair share of top shooters, and I think they get used to practising on testing courses throughout the year. Come the day and star shooter, Richard Woods and his merry gang of helpers, have normally ensured that we face a super testing course that well and truly pushes the rules to the limit; Round 5 was no surprise. I couldn’t make the Saturday due to unforeseen circumstances, but M.A.D.’s hill of death was utilised and, apparently, the wind was fairly confusing. One top lady shooter well and truly blew away the opposition though, taking top spot overall and making a massive statement of intent for the remainder of the season. Theresa Reed is no stranger to the Rostrum, but her 58ex60 was impressive in anyone’s book. Young Ewan Pantling was perhaps the shot of the day, posting a brilliant 54, and taking the Junior 14-16 class as he did so.

Come the Raffle, and William Hoggan was one lucky chappy, taking home an Air Arms TX200 supplied by the Airgun Centre. Day two and more stable weather was forecast all round; a brighter, drier outlook and far less wind.

I was playing with a modified Impact, whilst my S400 gets a regulator fitted and I must say it feels good to shoot. A confused approach to three or four closer reducers ruined my score of 52, but later analysis of elementary mistakes has left me heartened going forward; I’ll show the mods off soon. Former World Champion, Kieren Turner, took day two with a 58, I think we can say he is back? And that man Ramshead did his national campaign no harm at all with a 57 and second place after the shoot off. Bill Jones won a Weihrauch HW97 in the raffle, so all in all, another great day’s sport.

All eyes on Weston Park!

And so, all eyes on Weston Park and the Midland Game Fair, that this year will play host to our World Championships. Exciting for sure and, as someone who attended probably 25 years straight of this show, often participating in the FT European Championship, I’m only too aware of, firstly, what a superb location it is and, secondly, what a great show it is. Having the fair as a backdrop always adds great atmosphere, with the bustling sound of the main arena and black powder shots ringing out throughout the day. I have fond memories of competing in FT in the early days, with events such as the Chatsworth Country Fair another favourite. Us tucked inside the fringes of a cool wood, navigating our targets, to the strident sound of the Highland Marching Band thumping out a rousing number across the arena. Brilliant stuff and all part of the unique atmosphere that these country events muster up.

Plus, if we’re lucky at the Midland and the organisers make the most of our event, we could find ourselves showcasing HFT to the general public, as they come over and chat with competitors, slowly moving through the course. Spectators should be a big part of these events, as we spread the word; so, let’s hope that the layout allows for that.

So, whose in with a shout this time around? Well, as I’ve just recorded earlier, former champion Kieren Turner, despite his protestations to the contrary, is firmly back on form. Elliott Compton has been in dynamic form earlier in the year too and he has youth on his side. Our genial, overworked admin man on the circuit, Charles Peal, is capable of breaking through for sure; whilst that wise old campaigner, Dave Ramshead, winner of the Airgun Championship (FT & HFT) earlier in the year and so often the Bridesmaid, is surely long overdue for the big one? Then, there’s Neil Wakelin and someone called Theresa, but, hold on, have I told you about my modded Impact?

For pre-booking application forms and downloads regarding established UKAHFT events (where bookings are possible), and all the latest information on anything connected with Hunter Field Target shooting, take a look at the following websites: https://sites.google.com/site/ukahft/ and www.shooting-the-breeze.com https:// sites.google.com/site/whfta1/ www.whfto.com

For pre-booking application forms and downloads regarding established UKAHFT events (where bookings are possible), and all the latest information on anything connected with Hunter Field Target shooting, take a look at the following websites: https://sites.google.com/site/ukahft/and www.shooting-the-breeze.com https://sites. google.com/site/whfta1/www.whfto.com