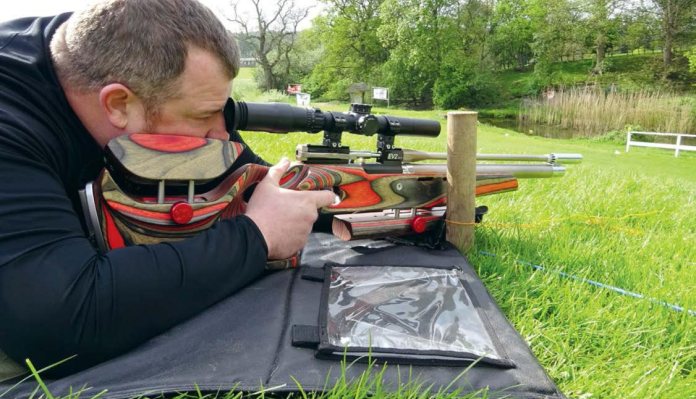 Once I got wind of the plans from Ian Bainbridge, that he was making a comeback to the world of Hunter Field Target shooting (HFT), and he was set to stage the HFT Championships at this year’s Northern Shooting Show, I was excited to say the least. Ian was one of the originators of the HFT Masters series of competitions, and his enthusiasm and humour make him an immensely popular figure in our sport. Oh, and he can also stage a blinding target course!

Ian’s merry band of helpers this time round came from Northern Monkeys HFT Club and Cloybank in Scotland, and with the Yorkshire Event Centre, in Harrogate, once again the venue, I just knew we were in for another treat.

If you’ve never attended the Northern Shooting Show, then you really must put that right in 2023, because this is an impressive event for sure. I’ve heard a few gripes that it doesn’t have enough to see. All I can say is, whilst it is undoubtedly smaller than the major Great British Shooting Show at the NEC, the practicality and sheer charm of the Harrogate site, just makes for a really enjoyable weekend, indulging in our sport. Check the list of stand holders and what’s on offer, and you won’t be disappointed in any case.

To be honest, this is my favourite event of the year, and it’s all very civilized too, with no great distances to walk. A short jaunt through the main gates, and a few hundred yards up the path finds our HFT competition site, and this is quite unique and superb in equal measure.

A few shots on the expansive practise range boards, all clearly marked up with yardage figures, and you get some idea as to, firstly how the guns behaving on the day, and secondly, what that pesky wind is doing. In fact, this particular spot is notorious for wind flow channels, and that certainly adds a major edge to the competition.

The first section of the course is shot from the high ridge, and as shooters adopt the prone position for the free-style section, we’re shooting down, at targets across a lake, down on the lawn, between trees, and even atop what looks like an ornamental duck house! Move through the snaking target layout, and we arrive in the orchard section. We’re lying on grass the whole time, and with blossom in the trees, and, as we had on the day, warm sunshine, flickering through, this is a rather pleasant place to be.

I happened to bump into an old friend, Mark Wilson, who’s been out of action for a while, and once I heard I’d been paired off with him for the duration, I knew it was game on! Mark’s a top shot, and he’s been a regular member of the England Team, so I knew he was going to force me to focus and hopefully raise my game. Come the shoot, and we started off just at the start of the orchard end. Longish targets bowing out into the dip, across into a tree, down over the white picket fence. I felt both of us were shooting quite well, and I knew that with some significant wind allowance, swinging the reticle out, both left and right, these conditions would be testing for everyone.

Scores are often lowish at this event, and so it transpired on the day. I just knew that missing a couple of close big kill standing shots was going to cost me, not to mention missing the duck house roof shot altogether, for a big fat zero! And with 52 ex 60 taking third place on the day, I was close, but nowhere. Irritating to say the least, and its discipline stuff which is costing me at the moment. An area to work on, but otherwise encouraging as I slipped into the top ten. Elsewhere, Neil palmer was busy posting a commanding score of 56, giving him a clear margin, and the overall Championship trophy. Well done Sir!

Come the prize giving at the tail end, and Mr Bainbridge had a big surprise in store, for those who hadn’t heard on the grapevine. Namely that next year’s event will see the staging of the World HFT Championships. That really is one to salivate over. Generous sponsorship on the day saw a raft of prizes given away, once Ian’s famous tombola did its stuff, and with Kev Fitzpatrick walking away with the main prize of a £1000 scope from Vortex, he for one went home a happy chap.

Thanks then to Ian Bainbridge and his team of helpers, for all the hard graft and hours of preparation put in for this one, the Norther Shooting Show team, and anyone else involved. I for one can’t wait for next year’s event, especially with that World Championship lined up!