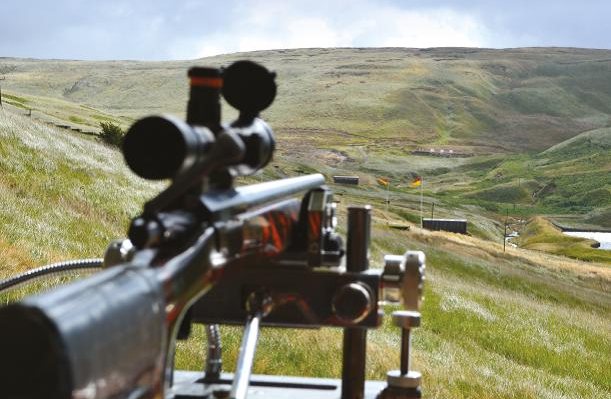 After discussing 100 and 600 yard Benchrest (BR) last year, I have finally turned my eye to what we would term as long range in the UK, the gold standard of 1000 yards. This discipline shares many of its details with the 600 yard version and is still based around an aggregate of four, 5-round groups shot throughout the course of the day. The main differences in equipment is that ‘light gun’ now rises to 17lb maximum weight and a new unlimited ‘heavy gun’ class allows weight to be unlimited, although the rules still dictate that the rifle should lift totally clear of both front and rear rests which are not allowed to be interconnected.

Unlike F-Class, where joystick front benchrests are used to assist multiple points of aim off for wind correction, a single solid pedestal rest with semi fixed bags, adjustable via windage and elevation dials is still appropriate here. As it’s all about getting those 5-shots away as fast as possible with complete control of the guns recoil within the same wind condition. The target backer at 1000 yards is approximately 6 feet square, a 4 foot square target within it.

It is generally accepted that the exact location of the group doesn’t matter, as long as it can be clearly seen and measured. But it is understandable that during sighters, most competitors will try to localise their group to the centre of the target to maximise their chance of getting all the shots on fair and square, in case they drift either to the left and right of their aim point as the wind stretches the group out laterally.

Most of the vertical error is shown up with gun handling or tracking problems. Although these are large guns with calibres of increasing ferocity, they are heavy and although not quite shot totally free recoil, are certainly allowed to move a little before hitting the shooter’s shoulder to arrest their progress. Differing motion in this arena shows up quickly as ‘vertical’ in the group and great lengths are gone to, to minimise it. Teflon tape may be applied to bearing surfaces to reduce friction, sandbags are filled with ultra-dense zircon sand (extremely heavy to deaden any movement) and the wings of the front bag can be tension adjustable at the forend. Shooters will tap the comb of their stock, often with a light rubber mallet to compress the fit between rifle and rear bag. Front bags are stored with exact replicas of their associated rifle to retain sand ‘shape’ inside. The details are endless.

The heavier and wider forend on a custom rifle further aids by minimising gun lift on firing and also twist within it as the bullet spins down the bore and therefore exerts an opposing torque on the barrel and the hence gun itself. Stability is key, tracking is key, an ultra-light trigger (often as light as 2 oz. and the firer’s hand never wraps around the grip) is key and the ability to lift the bolt easily and load fast also happens to be….yes, key. Custom guns will usually be single shot and some eject as normal to the right yet are loaded from the left; yes there are two ports. Big actions like the Stolle Panda are aluminium to save weight, yet guarantee massive bedding area, the stress bearing surfaces within being inlaid steel components. Stainless steel actions are common and you get the odd bottom ejector too, just too keep things fast and smooth.

Most shooters will have a raised loading block at gun level mounted on an extended arm from their front rest to hold those five, critical rounds near the port. The other area where gun torque is to be avoided is the lifting of the bolt handle to open that action, bearing in mind a string of 5-rounds will often be shot as fast as 15-20 seconds, if not quicker, there is no time re-aim and all the shooter will do while reloading is slide the gun back forward against its stop (into battery). This means they want a bolt lift as light as possible, with as much physical leverage as possible, so twin-lugged actions are the most common; the handle may travel further but it applies less torque or jerkiness to that precisely positioned gun.

Interestingly, Heavy guns aren’t always large calibres, the added weight often just means they can be shot faster and it is not uncommon to see them in the smaller 6mm BR and such as they are used overseas for 10-round matches too. When you see these shot at full speed, it is like a semi auto, the shooters are almost robot-like in their repetitive motions and with forends often as wide as 5 or 7”, the rests used are enormous, yet they do slide like they are on rails, almost metronomic in tempo.

The calibre is important but on a calm day, an accurate small gun that is shot fast will regularly win. You can shoot belted magnums and up to 8mm bore diameter is allowed but nobody really minds what you shoot because there is always that critical balance between ballistic ability and shootability to weigh up. Of course, the big boomers will always beat the constantly changing wind better but handling them, even with a muzzle brake fitted is a more tricky process and smaller calibres like the BR allow you to shoot more often and really knowing your gun can never be discounted.

Considering the shooters of this sport will spend many hours at the reloading bench, optimising cartridges with limitless brass preparation, bullet weight sorting, powder weighing and infinitesimal detail on cartridge overall length (C.O.L.). It’s amazing to see them spend a whole day often watching and waiting for wind to at least stabilise with some consistency. When they are commanded to fire, they may have five minutes to release those 5-rounds, but considering they will try to have them done within about 20 seconds, four times in the day, they will spend longer hammering their front rest feet into the concert benchtop than physically shooting the gun.

It is horses for courses and although not the sport for me, I respect the detail and effort the guys put in to achieve their goals. Requiring little physical effort (other than carry over 100 lbs of kit to the firing point), it is also a sport that can include all, welcoming those of any age or sex, able bodied or those with disabilities and is very warm and friendly; there is a LOT of time to chat on a shoot day. These days are won or lost on the change of a breath of air in that 20 second window that goes against you. You will see a new name do well every day at this sport but when you look across the results of a whole season, familiar names and faces of both wind reading and gun prep/handling continue to remain the cream of the crop.

WILL YOUR WEATHER GODS ALIGN?

Let’s not forget those 1000 yards away in the butts who over the radio will raise and lower the targets all day, marking shots and groups, all measured to a precision centre to centre of 0.001”. Everything is relayed back to the firing point and the ‘wailing wall’ is where shooters congregate between each match to see the joy or dismay on each other’s faces as those numbers add up, the day based on the aggregate size.

To go below a 10” aggregate is a hell of a good day and that’s near as damnit 1 M.O.A. so next time a shooter has an argument over accuracy versus precision, know what Benchrest really is and what it really involves! The man who actually began my writing career, Vince Bottomley set a new record over ten years ago and given that it had already stood for years, actually broke his own record within a month with a group of 2.670”. This still stands TEN years on and may well do for ten more, his name forever in the record book, waiting for the Gods to align in another’s favour but, as Colin Montgomery said, “the more I practice the luckier I get” so maybe you should give it a go! Read more at www.freewebs.com/ukbra