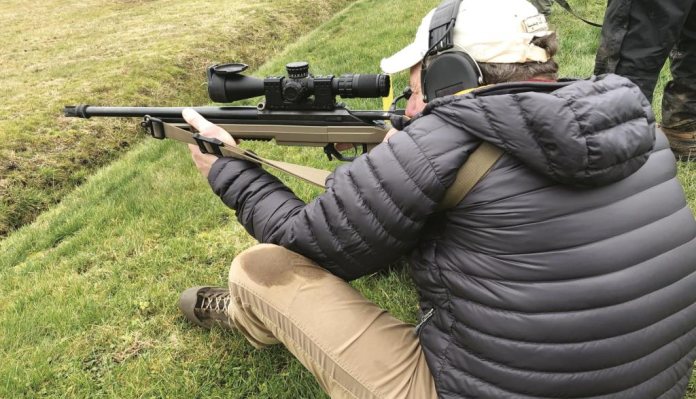 The first way to get started is to book yourself onto the National Rifle Association’s (NRA) CSR ‘Skills Development Course’. The NRA run various, discipline-specific courses, such as Gallery Rifle (GR), Target Rifle (TR) and Target Shotgun (TS) etc. They are perfect for people who are new to shooting and fancy taking up a specific discipline, or the more experienced who wish to learn about a particular discipline. Or even those who just fancy some expert tuition in something that they already take part in. These courses are open to NRA members and even nonmembers who belong to a Home Office approved club that is affiliated to the NRA. If you don’t already have a Firearm Certificate (FAC), that’s not a problem, as you can hire a suitable rifle for the duration of the one-day course.

You will receive expert tuition in the basics of CSR shooting and all the positions that are required, including prone, standing, kneeling, sitting and squatting. The course is conducted by experienced CSR shooters, who will be able impart their knowledge built up over years of competing. Safety is obviously paramount and those taking part will be shown how to use the rifle and how to load, unload and make ready in the correct way. This discipline has a fantastic safety record and a few simple rules and procedures ensures this continues. Competitors shoot in pairs, with the non-firer acting as safety officer for the shooter and they have to keep an eye on what they are doing, as well as make sure that the target is presented correctly.

If you have more general shooting experience, or just don’t fancy the formal course, you can just take the plunge, enter and turn up! This might not be everyone’s cup of tea, but it’s what a lot of people do, especially if they know someone at their local club who shoots CSR regularly. New shooters will always be paired up with an experienced competitor, so that they can be shown the correct way of conducting themselves on the firing point. There is always a safety briefing before shooting takes place and competitors must attend, even if they’ve been shooting CSR for decades! NRA ‘Safe Shooter Cards’ are checked at the start of every season and anyone new has their card checked on their first visit. There are four ‘details’, A, B, C and D, with people in A and B shooting while C and D are down in the butts, operating the targets etc; once completed, it turns around with the butt crew going to the firing line and the competitors doing their turn on the targets and scoring. The system works well, thanks to the excellent organisation.

Whether you take the course or enter and turn up, the basics are the same on the day. Guns are always either bagged or flagged, i.e. kept in a gunbag or slip when not in use, or have a breech flag of some sort fitted, to show clearly that the rifle is in a safe condition. These bright yellow flags are cheap to buy and take the form of a simple rod that fits into the rifle’s chamber that protrudes through the ejection port/receiver, regardless of bolt-action or straight-pull types. In both cases, they give an instant and visual indication to everyone on the firing point of the gun’s safe state and also won’t allow the bolt to be closed. Rifles are only allowed on the point during shooting and shortly after, so that the firer can observe the target, to see where their shots have gone. If you shoot in one of the classic or iron sight classes, you can use a pair of binoculars to view the target, as can those who shoot in Service Optic class.

Loudspeakers are used on the firing point, so that range commands given by the Range Officer (RO) can be heard clearly along the line. This is even more important nowadays, as numbers have grown considerably, so shouting just isn’t an option any longer! The course of fire (COF) for the day is available to download when you enter on the NRA’s website and it’s a good idea to print it off and familiarise yourself with it and take a copy with you. The instructions are very clear, but I always write a brief synopsis of what is required in red biro, so that I can see at a quick glance what’s involved; something like ‘300 yards, sitting, 5 x 2 shots.

I will also write ‘Mag 3 of 10’ etc; as all my magazines are numbered, so that I can determine which ones might not be functioning correctly for some reason and the ‘10’ indicates how many rounds should be loaded for that detail. If sighters are to be fired prior to the actual ten to count, I just write ‘12’, so that I don’t run out during the COF, I’ve seen too many people do this, after they forgot that the sighers take up rounds!

Prior to shooting, competitors are told to move onto the firing point and take control of their rifles and, when instructed, to remove safety flags and LOAD! It’s best to have already set the scope’s elevation turret to the required setting. LOAD entails placing the magazine into the rifle on a closed bolt with the safety catch applied. MAKE READY is when the rifle is cocked and a round loaded into the chamber. When it’s time shoot, the order WATCH & SHOOT is given, and firers get into position (if not already there) and engage the target when it appears with the required number of rounds.

When the competitor has finished shooting, the action is opened and the magazine removed, so that the safety officer can inspect the chamber, bolt face and magazine well; once satisfied the rifle’s in a safe condition, a chamber flag is inserted and the safety officer holds their hand in the air, to show the RO that everything is safe. Once everyone has signalled clear, firers can remove their rifles from the firing point. Targets are then shown to indicate the position of the rounds and scores given. I always write down my scores on the COF and make a note if shots have gone low or left etc. This is very useful, as it can soon show if your zero has altered, or the windage or elevation adjustment isn’t quite right for some reason. This is assuming that the scope has been adjusted correctly for the distance involved, as it’s really easy to forget and there’s nothing worse than a lovely group that’s either too high or low!

Some details involve a ‘rundown’, where you might shoot a couple of rounds at one distance then run to the next distance; don’t worry if you’re not mega fit, as CSR is for all ages and abilities and it’s more of a jog anyway. Rifles always have an empty chamber and the safety catch applied; the magazine is in position, but the action can only be cycled when on the next firing point. As I said before, safety is all, and nobody is ever in front of anyone else who has a rifle with one ‘up the spout’.

Down in the butts

All competitors are expected to do their stint in the butts and this can involve pushing and pulling the steel frames with three Figure 11s mounted in it, or holding Fig 12 targets in the air against the target frame. If you’ve not done it before, don’t worry, as your experienced partner will show you the ropes. You have to present the target quickly and efficiently and bring it down at the same time as everyone else. It is also good practice to watch the sandbank behind the targets, to check that the correct number of bullets have impacted and to also be aware of shots that have gone low or high. This is vital during the two sighting shots, as if the firer’s bullets have impacted away from the expected point, you can relay this fact to the firing point, so that they can correct their aim or scope settings.

After the 10 shots have been fired and the Butts Officer has signalled for the target/s to be lowered, you have to count up the number of hits and count the 5s, 4s and 2s (dependant on the target being used) and place marking discs in the bullet holes. The Butts Wing Officer will then take scores and replay them to the firing point; if there are no challenges, the order DOWN & PATCH is given and you simply remove the markers and stick the appropriate coloured round sticker over the hole, ready for the next shooter. Hearing protection must be worn, and eye protection is also advised but not mandatory.

So, if you’ve ever fancied CSR, take the plunge, enter and take part in the best shooting discipline around! Next month I’ll take a look at rifles and gear.