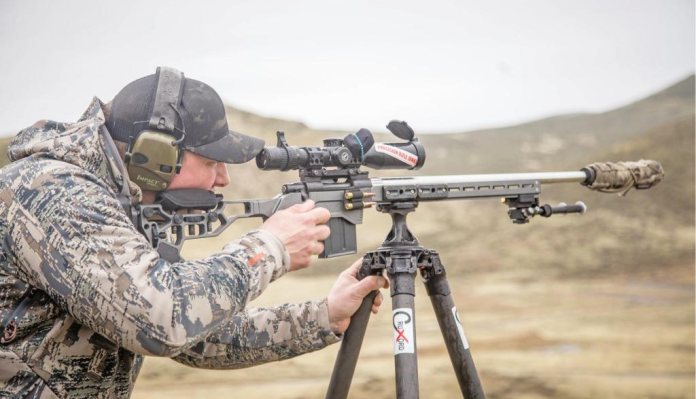 Precision Rifle Shooting (PRS) is the art of engaging long-range steel targets from improvised positions against the clock and also the fastest growing rifle shooting discipline across the world. But until Tiff Dew of Roundhouse Firearms Training formed the Precision Rifle League (PRL) in 2019, there was no way of connecting the various independent meetings taking place. Under the new formal league, shooters have been brought together at multiple venues across the UK, all vying to decide an overall champion.

I have a good friend in the USA who’s a well-respected PRS competitor and had already planned a trip to shoot my first match in the American National Rifle League in Idaho, in late March 2019. With the UK league beginning, I wanted to get involved in supporting the growth of the sport in Britain. Through my employers, Highland Outdoors, we arranged to sponsor the league, with prizes and heavily discounted clothing for the Range Officers and Marshalls who freely give up their time to grow the sport.

I also set about putting together a rig, which would be suited towards competing in such challenging competition. Being as we sell factory rifles, I’d chosen to compete in the Factory Division, which places a limit on the cost of equipment: rifle and scope (SRP) must not exceed £1500 each. As the UK and European distributors for Howa Rifles, I chose a Howa 1500 barrelled action in 6.5 Creedmoor. This is a great modern calibre, as it’s easy to load, offers fantastic ballistics and, most importantly, with a 140-grain bullet is easy to spot (splash) when hitting or missing targets.

Stock choice was more difficult, it has to be adjustable and, for reliable feeding, AICS pattern magazines are essential. The trend amongst US competitors is to shoot increasingly heavy rifles for improved balance and recoil mitigation, which allows better spotting of splash. I chose the KRG Bravo chassis system, which ticks of the boxes, except for being heavy. However, the build has lots of hollow sections to fill with removable weights.

Scope-wise, the main concerns are that it is mechanically strong and repeatable, it also needs good glass, as well as having enough adjustment to dial up to the furthest targets. For 2019, Sig Sauer launched a new Tango 4, which ticks all of those boxes and more. However, whilst I waited for the new Sig, I used a range-topping Sig Sauer Tango 6, which was enough for me to get started! With the rifle and scope picked, I needed to decide on ammunition. Having experience with Nosler RDF bullets in my other 6.5 Creedmoor, I wanted to take full advantage of their class-leading ballistic coefficients (BCs).

Nosler all the way

Sticking with the theme, I also used Nosler brass and set about load development, which was pleasingly easy. The whole idea behind this project was that I could use this rifle as a test bed to assist other Howa owners and pass on the benefit of my experiences, to aid them in their shooting.

I have a background in competitive airgun shooting, but it’s been almost 10-years since I last shot HFT and my experience with firearms has been hunting based or more fun shooting. I’d not competed at any sport for a few years, so this gave me a chance to get the competitive juices flowing and enjoy the comradery of fellow competitors. So, I half-heartedly did a couple of practice sessions as and when the weather allowed, and I wasn’t too tired from fox shooting or deer stalking.

Fast forward to mid-March and, after a pleasing run down to Cornwall, I was ready for the first training weekend of the PRL calendar at the Roundhouse Firearms Training facility and my first time trying this style of shooting. To say things didn’t go well would be an understatement! I learned all about how important accurate data is for best performance; it turned out my chronograph wasn’t as accurate as it could be, which had thrown out my ballistics app. However, it was nothing that wasn’t easily resolved and with the support of the other shooters, I got back at it and was consistently ringing steel.

Three days after leaving Cornwall, I was on a plane heading to Nevada, to hook up with my American buddy and we spent a day practicing in the desert. We spent the whole day shooting and setting up his spare Howa from scratch, so that I could get more familiar with the process. We went through some great training drills that involved hitting steel gongs out to 1100 yards from a variety of positions, which helped my confidence. The next day it was off to Idaho for my first match.

Instantly, I was made to feel welcome by the National Rifle League team and, after a quick zero check, set about helping my buddy run the MDT side stage, by loading mags and working the shot timer. Watching the top Americans shoot from a tank trap for the fastest time was a great experience. I acted like a sponge, soaking up as many tips, techniques and methods as possible.

Shooting isn’t a spectator sport, so I took my turn and fumbled my way through making 5 out of 6 hits on a 5” gong at 300 yards, from each point of the obstacle in 53 seconds. The winning time by comparison was 6 from 6 in just over 31 seconds! These guys meant business, not only do they shoot accurately but quickly! The words ringing in my ears when we went for dinner were; ‘move fast, shoot slow!’

In readiness for the match, I went over the scoring system and other things. It consisted of 220-shots, every hit counts as a point and misses count for nothing. Usually, a random draw will take place to decide the shooting order, with the first shooter being put to the back and going last at the next stage, so that everyone gets a turn at being the wind monkey.

The next day, following the safety brief and pledge of allegiance, we made our way to the first stage and my card was drawn first. With some help from my squad, I approached it as best I could, needing 2 shots from 5 positions on a burned-out pick-up truck. I timed out before getting all my rounds off, only making 3 hits. A combination of small targetry, nerves, excitement and unfamiliarity with what I was doing, put paid to any wild dreams of sneaking in a surprise good performance! The highlight of day one on the firing line saw me in familiar territory, shooting at an 8” moving target from a hay bale 610 yards away. This is one my favourite places to shoot from, with a Howa in front of me and I managed 8 out of 10 hits on this stage within the 90 second time limit; result.

Day two, I had made a small improvement; being more familiar with the demands of the competition. More hits, moving faster and some terrific times with my squad mates, who epitomised American hospitality and the PRS brotherhood. After day two finished, it was the awards banquet for prize giving and a social. My improvement meant that I’d scraped a top 100 position, coming 99th - result. This gave me an idea of where my weaknesses lay, to help me improve before the UK PRL began. The big stand out was the prize table with custom guns, actions, optics, chassis and every manner of cool rifle shooting gear available. Even with my lowly finish, I was able to come away with a prize!

Back in Blighty, I begun to formulate a training plan, as I had better idea of what I needed to do; having competed in various sports my entire life, I know how important structured practice is. I bought more steel targets and set about weekly shooting practice with a focus on building a stable position, maintaining good marksmanship fundamentals and moving quickly. This was supplemented with 20 minutes of dry fire practice every other day.

With planned practice and training, by the time I got to Gardner’s Guns in Scotland for the second practice event I was much more confident, managed to hit more targets and things came more naturally. Feeling happier that things were moving in the right direction, I continued practicing and getting as much trigger time as possible; shooting a minimum of 200 rounds per week. Once the clocks went forwards, I was able to take advantage of the extra daylight and practice straight from work!

All of this shooting taught me that the American trend of adding weight is a good idea, as it reduces felt recoil and allows for easier spotting of impacts and misses. I also fitted a muzzle brake, meaning I now had a very loud and easy to shoot rifle, which made spotting hits and, more importantly, misses easier. I added a full length KRG ARCA rail to the forend of the Bravo stock. As well as being able to directly mount my rifle to a tripod, this enables me to have a bag attached, which allows one hand to be free when moving position. I also added an Atlas bipod with an ARCA clamp.

That’s it for this month, next time, I’ll discuss my first UK PRL comp, good shooting.