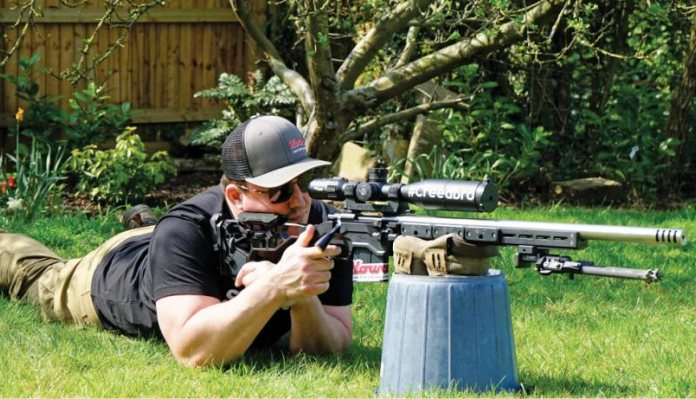 What a strange year 2020 has been so far, we’ve had more rain than I can remember followed by COVID-19 and the associated lockdown which altered many plans for the year. Like many highly tuned athletes (ha!), precision rifle shooters were faced with the question; what to do during lockdown with no competitions and restrictions on groups meeting up?

Enter the US company Warhorse Developments who had the great idea of running two remote matches which were entered over social media. To stay inclusive for everyone the props and barricades were all common household objects like chairs and step ladders. With recommended target sizes of 2 MOA, along with options for rimfire and centrefire entries. The matches were held over 4 weeks, with participants uploading videos of each stage from the course of fire to Facebook or Instagram. These matches received huge support from the industry worldwide and culminated in a random prize draw which was live-streamed over social media to a few hundred eager viewers. The most pleasing part was the involvement of Mrs C. who volunteered to video my match entries. She enjoyed watching me have fun and has taken an interest in precision rifle shooting (PRS) and as a result has adopted my practice rifle, naming it the “Wifle”! Once she’s shot some competitions using my kit, if she wants to continue I’m sure she’ll end up with her FAC and a “Wifle” of her own!

With most of the world stopping shooting, it was great time to really crack on with dry firing practice and every other day I would build a couple of stages in the back garden using scaled-down printed targets. Working on trigger technique, moving between positions and manipulating the rifle was a big help, particularly shooting form the awkward lower positions which are always a struggle for us bigger and less flexible guys. Even dialling on elevation and windage calls based on the conditions of the day, it became such a regular fixture that a Robin took to using my rifle barrel as a perch whilst I was having a tea break on the patio! The repeated dry firing runs allowed me to fine-tune the balance of my rifle using the MDT weights so that the balance point is sat perfectly around 4” in front of the magazine well for ease of use.

Something I’ve worked hard at is building a good shooting position quickly and efficiently. One of the drills I’ve been doing involves setting a timer for a 10-second countdown, before getting on a barricade, making a good trigger press and overemphasising follow through before the alarm sounds. This has helped me get quicker as well as making better transitions between firing positions. As lockdown restrictions eased and I was able to get out to do more live firing, this translated into more impacts on targets in shorter times.

One of my lockdown highlights was being invited to appear as a guest on the Precision Rifle Channel podcast with my friend and National Rifle League (NRL) President/ Founder Travis Ishida. We had a great time catching up and talking all things precision rifle, particularly how the sport is growing so quickly around the world especially within the UK and Europe.

The NRL has now established a chapter in Spain and the NRL22 is partnering with the Precision Rifle League (PRL) here in the UK to put on a series of rimfire matches, which are due to start later in the year. One thing I’m keen to do after beginning my PRS journey in 2019, is to take part in more international matches. Spain is really quick and easy to get to from the Midlands (although random acts of quarantine make the return more precarious!) and the Viking Rifle Series in Norway is absolutely on my list of places to visit for a match. With an invite from the President to the NRL grand finale in Oklahoma City for 2021, there’s a strong chance of accruing some serious air miles once international travel becomes less complicated!

Once travel restrictions eased, I paid Mike at Brock and Norris Custom Rifles a visit as he kindly agreed to support me with barrels and gunsmithing work. The barrel part of the equation is coming from the Canadian company, International Barrels, in the form of helically fluted barrels, which are even more accurate than they are good looking! This means that I’ve got my straight, no taper barrel in storage to use as a spare. It has a load developed and is ready to go when I need it, whilst I enjoy the good looks of the fluted barrel! Mike cut the new barrel with the same reamer and dialled every process in for perfect alignment and zero runout, the same as my first barrel. With just a few clicks to adjust zero, it shot the same load to the same level of accuracy when I got it home. This kind of ease of use is exactly the reason why I asked Mike to build my rifles as it’s his attention to detail that makes my life easier as a shooter and gives me more time to do what I enjoy; shooting!

Confidence in equipment is key when preparing for competition and with more time than usual on my hands, I took full advantage to make sure I was happy with everything. Having made the switch to 130gr Nosler RDF’s from the 140’s I used last year, I needed to make sure that my Kestrel ballistics data was true, giving accurate corrections and ensuring that the rifle performs just as well at distances greater than 100 yards. Luckily, I have a good friend who is happy for me to put targets out at 1000 yards at his place, which is perfect for trueing data. I painted some lines across some of my larger targets to see how far off the vertical correction was, shooting the first target was pleasing as there was less than 2” vertical dispersion in some tricky wind. I moved to the second target and shot for a group, using a dot of paint as an aiming mark, I landed my shots within 4” of each other, with the first one almost landing on the dot! After this, I turned my attention to getting some positional shooting done. At these longer ranges, it was helping me stay strict with my follow through in order to watch the impacts.

Although most of the lockdown period was blessed with terrific weather, I took advantage of some of the extremes to prove my ammunition was as consistent as my rifle. This included a rainy morning leaving loaded magazines exposed to rain and shooting targets whilst looking for pressure signs. The rifle and ammunition passed the test with the RDF’s flying true in cooler wet conditions as well as in 30°C summer sunshine. The PRL was very lucky with the weather last year, with an extended season to look forward to as a competitor, I want the reassurance that I can rely on my kit regardless of location or conditions, leaving everything else to me.

One of my favourite kinds of shooting is PRS with my .22 rimfire, it’s quiet, cheap and doesn’t need a huge amount of space compared to a centrefire. All terrific practice for building a good position to shoot from. Sadly so far this year I’ve not been able to get to any rimfire shoots, however, it’s not stopped me staying up to date with how my pals are doing or meeting up with them to have a shoot. In mid-June, I was joined by Giles Tibbetts and Gav Jones for a nostalgic ‘pop can rimfire challenge’ which involved us shooting some excellent can-shaped gongs from Tom’s Targets, at a variety of distances, from a selection of props in my practice paddock.

As is usual when friends get together there’s always an edge to proceedings. As much as we all want to help each other shoot well, we also want to hit more than them! The guys are both keen to get involved with the PRL and once they’ve got more suitable centrefire rifles I’m sure they’ll take to it like a duck to water.

That all for now; next month, I talk about helping the Royal Marines Precision Rifle Association (RMPRA) set up a course of fire along with suitable targets at one of their practice venues.