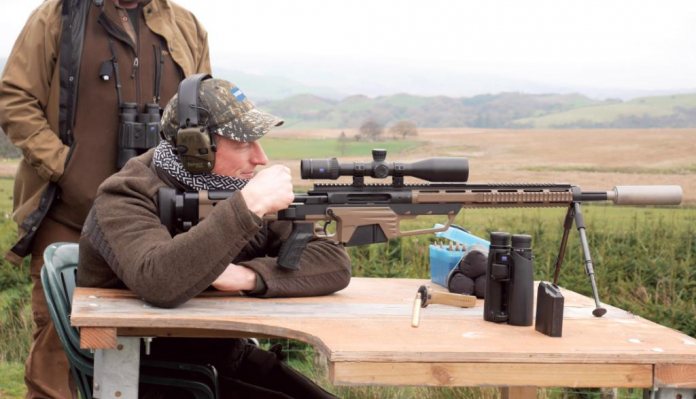 WMS Firearms training is becoming a regular venue for big brands with new longrange products to showcase. It’s hardly surprising, because WMS offer an excellent package, offering a profusion of steel targetry and a variety of firing points distributed across wide expanses of Welsh upland, backed up by expert tuition from Andrew Venables, plus great food and comfortable accommodation at the Y Talbot hotel in Tregaron.

I’ve had the pleasure of visiting WMS several times, both for press events and on my own account; so, when Zeiss got in touch to invite me to go and try out the new long-range scopes in their Conquest V6 series, I jumped at the chance.

The V6 series, as its name suggest, offers a 6x zoom factor, so the two new models run from 3x-18x and from 5x-30x. Both have a 50mm objective lens, a parallax-adjustment wheel on the port side, and quickdial target turrets matched to a second-focal plane (SFP) reticle calibrated in Minutes of Angle (MOA); and, like the rest of the V6 series, you get a 30mm main tube and a quick-focus eye bell, plus a lens system that features FL (fluoride) and HT (high transmission) Schott glass, enhanced by Zeiss’ T-star coatings and their dirt-and-waterrepellent LotuTec finish. The result is a tough, capable scope that offers a brilliant, sharp image with excellent colour definition and a high, if not exceptional, 92% light transmission figure.

At 14.9-inches and 27.9oz, the V6s are surprisingly compact for their specification, and one can see the 3-18 model making a good double-duty optic for stalking at the bottom end and longer-range target or varminting work at the top-end.

Andrew had set the V6s up on a selection of rifles that included a Howa 1500, a Weatherby Vanguard and a clutch of Blaser R8s. He also had a lefthanded bolt for the latter; a detail I really appreciated, as it let me get the most from these handy and accurate rifles. Calibres were .223, 6.5x55 and .308.

Out at the range, we started with a brief from Andrew on the features of the scopes, on the plan for the day, and on range safety. His approach to the latter focuses on safe rifle handling rather than on rules or commands, which works well. Brief over, we set to familiarising ourselves with the scopes, rifles and ammunition, and confirming zero at 100-yards.

My own long-range shooting is now exclusively with ‘metric’ Milliradian (MRAD), first-focalplane (FFP) optics. Advantages are that an FFP reticle is always scaled to match the target, regardless of magnification; and with MRADS all the sums are simple decimals, since 1 MRAD = 1m @ 1000m and scopes typically have 0.1 MRAD clicks (i.e. 10 clicks per MRAD) rather than the halves, quarters and eighths offered by MOA scopes. Team up an FFP/ MRAD riflescope with a spotting scope equipped with an MRAD eyepiece, and you have the perfect solution for a shooter/ spotter pair to measure targets and call impacts precisely at any range and magnification with the simplest of mental arithmetic.

So, whilst I’ve had a lot of good experiences with Zeiss optics over the years, I feared that working with an SFP/MOA system would feel like a step backwards, and it kind of did, but it certainly didn’t prevent us from ringing a lot of steel!

First impressions of the V6s was that they were very pleasant to shoot with. The dioptre ring had plenty of range and just the right amount of stiffness. My shooting eye requires a lot of dioptre adjustment, so for me this was the first crucial hurdle the V6 had to overcome. I also found the ‘eye box’ (the zone in which you can position your eye and still get a good image) agreeably accommodating. This matters more on a hunting scope, where the rifle may need to be mounted and a shot taken quickly, than it does on a long-range set up, which is typically used in conjunction with a settled prone position and an adjustable stock, but it’s always a welcome feature nonetheless.

The next step was to dial up the magnification and focus the target image using the side wheel. This showed the same smoothness and steadiness as the dioptre ring. As expected, the target image showed some dimming and loss of definition around the edge at the top of the range. Unsurprisingly too, this was more marked on the 5x-30x, where the best balance of magnification and image quality came at a still-veryuseful 25x. A welcome feature was that Zeiss have scaled the reticle to measure true at maximum magnification, so there’s no need to take your eye off the scope to find a specific mid-scale measuring point (usually located at 10x), and you get a larger target image to measure off, making for more precise solutions.

If I were to quibble, I’d prefer a really tactile detent at 25x on the 5x-30x model, for the best marriage of visibility and measurement, but that would add greater operational complexity and the V6 longrange is evidently designed for US shooters who want to extend their reach but without moving away from the MOA/ SFP configuration they’ve grown up with. In other words, simplicity and ease-of-use is the order of the day!

The turrets are clearly marked, easy to grip, and offer positive-but-not-overly-stiff ¼-inch clicks. The range of adjustment is good too. Both scopes offer 20 MOA per turn, with the 3X-18X boasting a total vertical range of 103 MOA, and 58 MOA horizontally, whilst the 5x30x has 62 MOA and 34 MOA, respectively. In each case, turn indicators make it easy to see which turn you are on, and there’s also a usersettable stop that makes it easy to reset the scope to zero, either at the end of the session, or when you lose track of which turn you’re on while shooting. (Don’t laugh, it happens!)

The scopes we were using had the ZBR-1 (5X-30X) and ZBR-2 (3X-18X) ballistic reticles. These show a ‘Christmas-tree’ type pattern, with hash marks at intervals of 1 MOA or 2 MOA, respectively. Also available is a Z-MOA, a simpler pattern, on which the 1- or 2-MOA hash marks are located on the crosshairs only. The former pattern favours shooters who prefer to aim off, whereas the latter is better suited to those who would rather dial in their adjustments. Further options are the simpler #43 MOA ‘mildot’ and #6 ¾ duplex designs, which are better suited to closer work. I liked the ZBRs at shorter ranges too but felt that they were slightly thicker than ideal for small, distant targets. Perhaps, but not enough to make any practical difference!

Having got to grips with the gear, we drove a few hundred yards up the track from the zeroing range and occupied a new firing point some 900-yards from a small quarry filled with steel targets. A shooting bench was set up, mats laid out, and spotting scopes deployed. Zeiss sales managers Kevin Coles and Matt Brooks had also brought along a couple of the new Conquest Gavia 85 spotters, some Victory RF rangefinding binos, and a crate-full of top-end Victory SF 8x32 and 10x42 binoculars.

He had also measured the velocity and worked out the drop and drift for the loads we would be shooting to ensure that our rounds would be falling as close as possible to the target from the start. This phase of the day also provided an opportunity to compare the drift and drop of the 6.5x55 and .308 loads in both hunting and target varieties, and most significantly, to compare the performance of the sporting cartridges with that of the .338 Lapua Magnum.

The wind was tricky, as it always is at range, but the hit rate climbed quickly as spotters and shooters refined their calls and adjustments, and the precise characteristics of rifles and optics were forgotten as we focussed on achieving an unbroken run of rounds on target. And that’s exactly what you want: the kit just doing its job and letting you get on with the serious business of having fun.

My thanks to Zeiss UK and WMS Firearms Training for organising and running this excellent event.