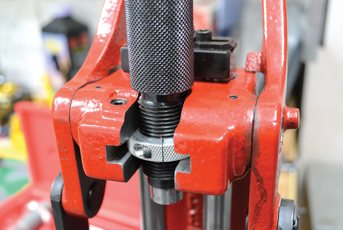 The other key points are that your calibre-specific reloading die is not screwed into the top (planten) instead it slots in the front using its own lock ring to locate it both radially and vertically. Further to this, you won’t find calibre-specific shell holders that snap into place atop the ram, as it incorporates its own system! As the lever is operated and the lower platform of the press lifts, two jaws close onto the rebate of the case rim with `teeth` to centralise and draw it back out of the die after operation. The supplied pair has Large and Small ends but the `L` will handle both 223 and 308 sized case families without the need to change over. Good job too, it is a fiddly, three-handed, procedure to avoid losing the tiny springs! Other jaws are available for rimmed cases like Hornets or .303 but the prices do add up.

These features are unique to the Forster and allow two main advantages, the dies can be clicked in and out of the press very quickly and as both die and shellholder effectively `float`, they self-align and improve concentricity during any operation being performed. Reloading presses are intended to last a lifetime, the usual combination of cast iron and steel is certainly up to it!

However, the Co-Ax is designed in complete symmetrical equilibrium so all forces exerted on the press are balanced with no torque applied. It may seem unimportant but why inflict torque where it isn’t needed? Another factor in longevity is the primer catcher. When run through your re-sixing or de-capping die, the spent primers and all the carbon that goes with it drop directly from the bottom of the case straight down a steel tube into a pot at its base. This avoids the dusty, abrasive and corrosive carbon waste ever coming into contact with any bearing surface which when lightly lubricated, remain glistening and never clogs up. The press will accept any standard 7/8”x14 reloading dies but Forster do recommend using their own lockrings for the best performance as they are part of the alignment system.

In use the press grows on you. Initially it seems a little awkward as you may be used to a conventional design where one hand remains on a lever positioned either left or right of the tool and the free hand inserts and removes cases when resizing, or bullets when seating. The Co-Ax is ambidextrous and you tend to find yourself using it more with both hands as the lever rests comfortably up top, the whole face of the tool is open to insert and remove components. The leverage offered is smooth and powerful yet delivers a more delicately balanced feel, very useful when loading tiny bullets like 17 Hornet that are easily damaged. A shorter actuation arm is available to further increase `feel` on small calibres at the expense of leverage. The self-actuating shellholder is the main item that requires re-coordination of your technique as the round lifts in and out rather than sliding into position. I snagged and spilled a few cases initially but did get used to the design. The Co-Ax also cams over `top dead centre` so in essence, goes through an infinite leverage ratio before it hits the bump stop.

To be honest, I cannot fathom why anyone would want to use a press that doesn’t do this but my reasoning would fill a few pages on its own. I gave the priming facility atop the press a brief try and found it to work but hand priming is so much faster; I didn’t carry on other than testing it. The feature I liked most, and it is a subtle one, is the way the leverage forces are directed, toward the skirting board at the rear/base of your reloading bench rather than straight down towards the floor, which tends to want to tip/bend your bench top. I have a 6x4” square Oak beam on my bench to mount any press so it isn’t an issue but for those working on a table top or temporary bench, a beneficial factor to consider!

When reloading some 6mmBR ammo I did my very best to push the brass case off centre in the spring loaded shell holder. Likewise I tried to shuffle the die off centre in its ball bearing sprung clip. But even with the bullet deliberately sat in the case mouth slightly drunk, everything sprang back toward centre and the ammunition produced was of top quality.

Resizing effort with 300 Winchester Magnum brass was perhaps a little heavier than on my RCBS Rockchucker but it felt smoother with more delicacy, especially when drawing the expander ball back through the case mouth. I never had a case mouth snag on the die upon entry and the lack of any carbon deposits to clean up gives a clean refined look to the Co-Ax, very pleasing considering the care we put into what it helps us create.

FOR:
Smooth to use
No carbon deposits to dirty
the press or bench
Applied forces are better
aligned with bench design
Fully ambidextrous with front
access

AGAINST:
Expensive
Needs Forster lock rings
Takes a little getting used to
For unusual calibres, the
shellholder can be a pain,
lost spring puts it out of
action

VERDICT:
This press does require a
little modification of your
reloading technique but
its advantages soon shine
through.