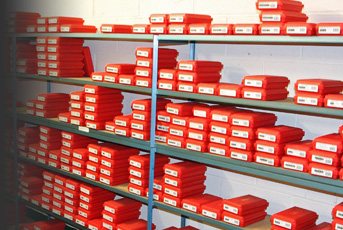 Living in North Yorkshire, I’m lucky to have several excellent shooting suppliers within easy reach, some of whom are national players in retail and trade sales. After moving into the area, it didn’t take me long to discover Tim Hannam, then a relatively young but very active supplier of handloading components and accessories, and I’ve been a regular caller for over twenty years. Recent changes to the business’s ownership and management structure have seen one of its co-founders, and his name, depart from the scene; the new name, Hannam’s Reloading Limited, is close to what shooters have long used anyway, a simple ‘Hannams’, the name I’ll use from here on. Alongside the change in company status, Pat Hannam becomes its owner and managing director reflecting changes in recent years that saw Tim follow up opportunities abroad and a declining involvement in the operation that bore his name.

Tim and Pat Hannam set up the business in 1983 distributing and selling just two product ranges, Lee reloading tools and MTM ammunition boxes. Tim had been selling these products to the trade as an agent for West Yorkshire based shooting entrepreneur and international arms dealer John Longstaff, who’d done much to promote handloading in this country. With Longstaff’s interests moving away from retail products, followed by his early tragic death, the Hannams became the UK distributors.

Twenty seven years on, the business has prospered having moved to roomy premises adjacent to Peckfield Lodge, a Victorian property situated between Leeds and York and until recently right on the London to Scotland A1 highway, the Great North Road. Thanks to a road improvement scheme that upgraded this section to motorway and moved it half a mile away, Peckfield Lodge sees its rural tranquillity restored while retaining fast transport links to the rest of the country with the M62 trans-Pennine motorway and its links to just about everywhere also close by. The buildings actually owe their existence to this strategic transport location having originally been a post that provided fresh horses to London to Edinburgh stagecoaches, the stable-block now the main warehouse, albeit much altered and added to.

Returning to today’s business; wholesale or ‘trade’ activities account for just over 90% of sales, the residue going to retail customers who either call in or use mail order. I had assumed public sales would be overwhelmingly by mail, ‘locals’ like me aside, but Pat says that the motorway links produce a fair number of personal callers. People making business trips or who are en route to holidays in Scotland drop in to collect an order, usually having phoned or emailed the list through beforehand with it put aside ready for collection. The employee count has grown to six over the years too, kept busy even in these difficult economic times.

Hannams successfully re-orientated its business after taking a big hit with the 1997 pistol ban, moving to specialising in a limited number of fields in considerable depth, building up stock-levels and product expertise to give customers a top class service. So, it no longer deals in firearms, riflescopes, clothing and many other products, restricting its activities to handloading gear, ammunition and components, accessories covering gun care, cleaning, targets, and all sorts of boxes for ammunition, range and hunting gear. This might suggest there aren’t that many product lines, but as we’ll see, the stock-range is huge with many, many hundreds of different products always on hand - over a million pounds’ worth.

Let’s start with handloading and we have three tools and accessories ranges here ranging price-wise from the ever popular Lee (on board throughout the 27 years), Lyman Products which is another longstanding Hannam product-range, and relative newcomer Forster, all from the USA and offering a full range of presses, dies, case-trimmers, powder measures, scales, priming tools – and so on. The Hannam name was synonymous with another American manufacturer for many years, Hornady with its comprehensive range of reloading tools, ammunition and components, but lost the UK distributorship role a couple of years ago. Nevertheless, it continues to stock Hornady products, so that’s four ranges. Doing a quick count, I reckon that adds up to a dozen press models alone, not to mention a much larger number of ‘press kits’ that include dies and other accessories. I’m not even going to try to count how many die-sets are covered… but we all have experience of dealers who claim to ‘hold a full range of ‘x’, only to find items are out of stock when we really need them – and no estimate of their availability either! Hannams attempts to have at least one example of every product in stock, more for the popular lines of course, although that’s not always possible given the recent rise in demand for handloading gear and subsequent supply shortages. An example is bullet casting tools and accessories, particularly moulds, which still see sizeable demand despite the near demise of pistol shooting. Hannams holds the full range of budget Lee moulds and lead melters, also most of the more expensive Lyman models, as well as its ‘4500’ lube-sizer and dies items for less popular calibres being likely to sit on the shelf for a long time before an order is received, likewise Lyman’s black powder handling tools.

I’ll focus on Forster tools for a moment as I’m a personal fan of this marque. They are more expensive than many, but are really well made for the shooter producing precision ammunition for a rifle capable of benefitting from it. A ‘Benchrest’ two-die set costs £71, half as much again as a Hornady equivalent and twice as much as the Lee Deluxe rifle die set, increasing to £100 if you specify the ‘Ultra’ set with a micrometer-top seating die. The sole press, the unusual Co-Ax model is priced at £275, serious money! But this is a marvellous machine whose manufacture involves 1,000 machining operations and while indubitably one of the most powerful presses on the market is also arguably the smoothest and sweetest in operation. It produces very consistent and concentric ammunition when fed the right components – a real aficionado’s machine. I asked Pat Hannam how it’s selling, and the response was the company has difficulty in keeping up with orders!

Hannams always holds an impressive range of ammunition components: Vihtavuori powders, Lapua cases and bullets, and Hornady’s extensive bullet range. While Lapua brass provides the standard that precision shooters judge other makes against, there are cheaper bagged ‘Relcom’ cases in stock for a much larger range of cartridges than the Finnish company caters for. These American (mostly Remington) products cover some 80 rifle cartridges from .17 Rem up to .50-70 Government with most kept in stock, plus a smaller range of pistol numbers. They are supported by various calibres and weights of budget jacketed bullets, commercially produced cast-lead bullets, and ‘totally lead free’ (electroplated) models for popular pistol cartridge calibres and weights. The top quality Berger Bullets range of match, varmint and ‘hunting’ bullets is a recent and almost too popular addition. Too popular? Some models, especially 7mm and .308” target models, have been on back-order with the manufacturer for months with resupply from the USA expected ‘soon’, such is the demand from long-range F-Class and benchrest competitors. (I’m a fan of this company’s target bullets in a trio of calibres and various weights and designs, hoping those I have on order will arrive in time for the upcoming season.)

Mention Hannams and reloading and shooters think ‘Vihtavuori’, the company importing and distributing the Finnish powders for well over 20 years in pistol and rifle grades, their numbers constantly increasing, now having reached a total of 26 different powders. I can’t say what their market share is, but it must be high, especially as they are priced below the American competition. Supply difficulties arise occasionally and I asked Pat about this – while Hannams gets regular deliveries, powder manufacturing sees long runs of only one or two products at a time, hence gaps in the factory gate availability of other grades. Hannams always tries to order enough to bridge these supply droughts, but it sometimes doesn’t work out, especially if demand rises unexpectedly for a particular grade. Sales data is being analyzed and the company is working with Vihtavuori to produce long term demand forecasts and an order-system to get around this.

The company’s name should really be ‘Hannam’s Reloading Supplies and Accessories’ given the range of the latter that it sells. There are so many, I’ll just mention some highlights starting with MTM, another original Hannam range, but hugely expanded from that of 1983 with far more ammunition boxes and lots of new products. Everything is still made from injection moulded ‘plastics’, so products are strong and light. A range of ‘dry’ containers is new, completely waterproof boxes with a rubber O-ring seal between body and lid. Some are for ammunition, including a new range of ‘ammo cans’ which are lighter facsimiles of the olive green military boxes you can sometimes buy as surplus, while other, larger versions act as range boxes and containers for anglers, farmers, sporting shooters, gamekeepers and whoever. One such is the ‘ATV Dry Box’ designed for tractors and quad bikes that is held securely on a (supplied) tray bolted to the vehicle carrying rack, quickly removable for onwards transport by its folding handle. Various size ‘Sportsmen’s Dry Boxes’ are popular with pigeon shooters, anglers, and those who muck around in boats – they keep contents safe from the elements, and if they fall into the water, they float! They are also designed to take an adult male’s weight for use as alfresco seats in the field or boat. Hannams also stocks other MTM gun care accessories including gun vices and range boxes with slot-in ‘arms’ to turn them into rifle cleaning cradles. There are target holders, shooting rests, and… well, you get the idea!

While Lyman has already been mentioned, it also makes gunsmithing tools, the fully adjustable and rotating ‘Revolution’ gun vice (a great rifle cleaning aid), trigger pull gauges, dial callipers and more. The Lyman ‘stable’ also includes A-Zoom precision machined metal snap-caps and training rounds, Pachmayr butt-pads, grips and accessories, and the much-praised Butch’s Bore-Shine powder solvent that also dissolves copper, lead, wax, and plastic wad fouling. The list goes on: Birchwood Casey (targets including ‘Shoot-N-C’ and other reactive types; cleaners, lubricants and a large range of wood and stock refinishing materials and oils); Harris bi-pods; and the Pro-Shot range of cleaning rods, jags, bore-brushes, bore-guides, and cotton patches. Mundane maybe, but a clean gun is a better shooting gun and these superb tools and materials let you do the job with less wear and tear on you and your barrel.

All This, and Retail Too

While primarily a trade supplier, Hannams is happy to supply retail customers, either directly or through their local gunshop – items usually go out the door the same day as ordered. If you are able to call at Peckfield Lodge in person, you’ll be made welcome, but don’t expect to find a traditional shop or showroom, rather a small customer area and sales counter, very like that of the traditional parts department of a large car dealer. If you know exactly what you want, phone or email it through and the order will be waiting – if you’re unsure or want to see what’s on offer, Hannam’s people will offer friendly, good advice and trot through to the warehouse to bring a selection of items to the counter for you to examine and compare.

You can see why this business has not only survived for nearly 30 years, but thrived. By the time you read this, its website will have been updated too with links to those of its major suppliers so you can get detailed product information. You can also download the company’s price list from the website.