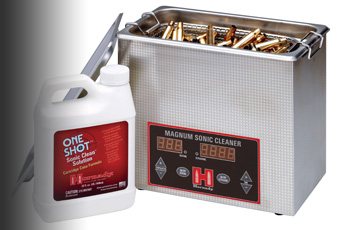 I have been reloading since 1976 and in that time I have learnt a lot. One aspect of the process I am bullish about is clean brass, as it allows case inspection for faults and with no external debris both the reloading and shooting processes are far smoother and less hard on the rifle’s chamber and dies.

To achieve this most use a dry case tumbler. A simple machine, filled with a non-abrasive medium (ground walnut shells or similar) it vibrates at high speed and polishes. The end result is a shiny brass hull, but closer inspection shows that the interior and primer pockets are virtually unaffected by the process. Big deal you might think, it makes no difference! Well you would be wrong!

The build-up of residue in the pocket can lead to incorrect seating of the primer that could cause ignition problems, likewise a reduction in the diameter of the flash hole will have an affect too. Internally the case walls get coated with baked on debris that can reduce internal capacity so increasing pressures. Extreme cases maybe, but better off without it.

Enter Hornady’s latest reloading accessory from their Lock-N-Load range - the Sonic Case Cleaner. Using high frequency, ultrasonic energy and specialised fluids the system cleans the whole case – inside, outside and the primer pocket too. It’s also designed to do small gun parts and two types of cleaning fluid are available from their One Shot range – Cartridge Case and Gun Parts formulas! No Case Cleaner came with the machine so I had to use water, which is also an option.

The machine measures 6.3x5.2x1.8” with a fluid capacity of one quart (4 pints). Inside is a stainless steel bowl with a removable plastic basket (with fill level line) that holds the brass; depending on calibre/size to about a maximum of 75. Controls consist of ON and OFF buttons, an LED display and a cycle selector. This last offers run times of 90, 180, 280, 380 and 480-seconds and automatically switches off when finished. Hornady points out that if you do three 480 runs the machine needs to be left to cool down for three minutes before continuing. They further say that three runs of this duration with the Case Cleaning fluid should do the job.

I only had water and dropped in 40, dirty 8.5x63 cases and some washing up liquid and set it on 480 seconds. The first few runs did not seem to achieve a lot, but inspection with a torch showed that already the carbon was starting to move from the inside. I had marked some of the bases with black marker pen to differentiate between loads, which my dry tumbler had never managed to remove but the sonic process took it off easily.

Inspection of the bottom of the tank showed a lot of debris that had been taken off in cleaning. I would presume that with the right fluid the process is faster and more efficient. When compared to a tumbler the Sonic cleans the whole case inside and out, however, you must factor in that they come out wet so need drying off.

The 1-quart version is the basic model and Hornady also offers the Magnum (3-quart) version, which has a bigger capacity and with its twin transducer build and programmable thermostat is rated as being more efficient. In terms of consumption a 1-quart jug of Case Cleaner should be good for 64 loads. Importers Edgar Brothers will be bringing in both models and the cleaning fluids.

Certainly a bit different but it also seems to work well and offers the added advantage of being able to clean gun parts like bolts and slides etc.