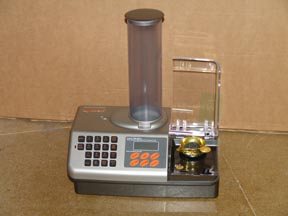 I’ve been rolling my own centrefire ammo since 1976 and in all that time I must have tried every labour saving device available. But one aspect of the process that’s hard to speed up if you want the ultimate in consistency is weighing the powder charge. Adjustable volume systems are pretty good and will throw a load with a .5 to .75-grain accuracy deviation, sometimes better. But if you want the ultimate - each load has to be hand weighed then adjusted to the exact figure by trickling in individual kernels of powder. Reasonably slow, but sure, and something I do for all my hunting ammo.

A couple of years ago Tim Hannam sent me the Lyman DPS 1200 (digital powder system), which is a machine that electronically weighs and dispense charges to an accuracy level of 1/10 of a grain. I found this to be so and also a viable alternative to the totally manual weigh/trickle system I had used up until then.

The DPS was clever, as it was not that large, could hold 1lb of powder and also remember a number of weights/charges, so all you needed to do was go into the menu, select a pre-programmed recipe and press the button. The machine could also act as a scale and even a standalone trickler. If I were to criticise anything the time to throw a reasonably large charge of say around 60-grains+ seemed long. Also when it came to changing over the powder, logically you had to be scrupulous in removing every grain of the previous type. To aid this there is a chute/sliding door in the rear of the body that allows you to pour out the majority of propellant.

The layout showed a multi function key pad for entering data – charge weights etc., and also storing it - plus a touch pad screen to allow you to calibrate and zero the machine, recall recipes and change the notation to grains, grams or even ounces. On the right, under a clear, hinged cover is the weighing platform, a powder pan, check weight and cleaning brush are supplied, as is a soft cover. The scale function can weigh up to 1200-grains!

The oddest aspect of the DPS is the fact that once you have turned it on, it’s recommend that it’s allowed to warm up/settle for 30 minutes before you zero it. This was a bit of a pain, as you had to wait half an hour before you could throw any charges. It is possible to avoid this step, but the manual states that “accuracy could be slightly reduced until full warm up is reached.”

One thing you should never do as I discovered to my detriment is to cut the power until you have switched the machine off. Logical I would agree, but by mistake I pulled the wrong plug and the DPS had to go back to be sorted; suffice to say I did not do that twice…

Like any automated device you have to learn to trust what it does and after some experimentation I discovered that the DPS will throw consistently accurate charges time after time.

Visually the new DPS1200/3 is near identical to the original. There are two more keys on the pad and the scale platform is not recessed in its base. This is better as it stops individual kernels of powder dropping down inside. Just a note here; the DPS is never to be used with blackpowder or Pyrodex etc…

The DPS is mains powered and comes with a US, 2-pin plug/transformer, but it’s no problem getting a UK adaptor. Follow the instructions as to warm up and zero then with the pan on the scale proceed as follows: key in the desired charge weight, which will show in the readout window. If it’s wrong it’s easy to use the Cancel or Back Space buttons to edit or clear it. Once done press Enter and the machine will dispense the powder. The screen will show 001, which indicates the first charge and by pressing Enter each time it will repeat the process and indicate how many loads have been thrown.

New and useful is the Auto Repeat function, which when selected immediately dispenses the next charge as soon as the pan is put back on the platform. Lyman recommends that once you have decided on a charge weight; return the first three to the hopper. The powder hopper and dispenser are removable for cleaning.

Also new is the increased memory ability. The original DPS could hold 20 of your favourite loads, which were entered as three lines of data; cartridge name, powder type and weight of powder. This was then accessed by using the Recall button, which was useful as you didn’t have to go through the initial entry process. DPS/3 can store up to 100 entries which is better. These can be accessed and even scrolled through to find what you want.

The DPS/3 claims to be faster and it appeared to be so. Reloading 300WSM, which can use 60-grains + takes some time to do on the original, but the new Mk 3 is quicker, which for big charges is most noticeable. Accuracy was within 1/10-grain, if not dead on, which is an error factor I can definitely live with.

At £239 the DPS/3 might appear expensive, but when you consider what it offers maybe not. Its expanded memory is more practical and the Recall facility speeds up and smoothes things along just that bit better. Not for everyone, but if you want precision powder charges at the touch of a button then I’d definitely check it out…