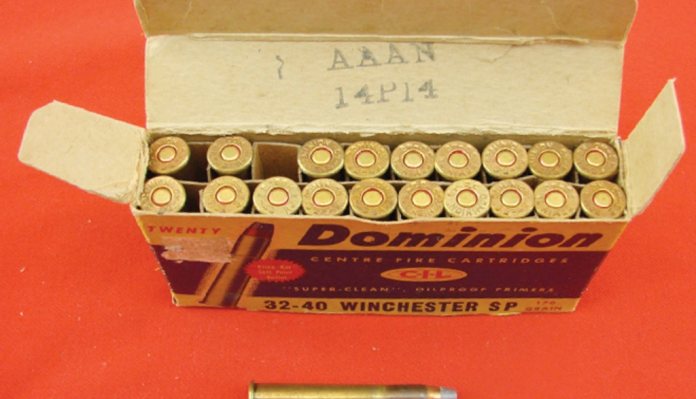 The parent of this month’s cartridge was American engineer Charles H Ballard. Christened the .32-40 Ballard in 1884, it became better known as the .32-40 WCF following adoption by Winchester within a decade of its introduction. Take note of the spelling, there is another .32-40, born about the same time and known as the .32-40 Bullard and is unrelated!

Ballard is perhaps better known for his patented rifle action designs, particularly his well-regarded Marlin built Ballard Union Hill Rifles, No’s 8 and 9. It was primarily for these models that the .32-40 rimmed, taper wall black powder cartridge was penned. As the nomenclature indicates, it housed a .32 calibre pill, propelled by 40-grains of Fg black powder, ignited by a large rifle primer. The original loading delivered a 165-grain RN lead bullet at around 1400 fps. Further designs soon followed, as the 200/300yd medium game hunting cartridge found better fortune as a highly accurate match/target round. A 165-grain SP variant soon followed. Just after the turn of the century, a wooden cased shot-shell variant was introduced by UMC - making best use of their new 133 foot lead shot tower in Bridgeport, Connecticut.

The popularity of the cartridge created a circular growth as other rifle makers, such as Winchester, Shiloh Sharps, Stevens, the legendary Harry Pope and others followed the lead of Marlin. The calibre adapted well to the change to smokeless propellants and in later, stronger rifles delivered almost 1900 fps from the 165-grain SP pill. The cartridge became the darling of the Schuetzen fraternity, winning countless comps. In later life, it received another boost, as John Wayne named it his all-time favourite chambering in his Winchester Model 94 lever action. Limited edition Winchester “John Wayne Commemorative” Model 94s still commanding high collector prices.

Big on popularity, small on data

Although commercial manufacture of the ammo initially ceased around the early 1940s, the calibre refused to die. The John Wayne limited edition offering saw nickelled cased, 165-grain factory ammunition from Winchester. The revival continued with Old Western Scrounger listing an OWC 180-grain load and the growth of Cowboy Action Shooting (CAS) has seen other constructions come to market, such as the 170-grain RNFP from HSM. Brass is again listed by several makers and the necessary tools are catalogued by Lee, RCBS, Hornady and Redding. Load data is less easy to find, my sources limited to Lee’s Second Edition, COW 13th Edition, Hodgdon Online Reloading Data Center (only for heavy CAS pills in modern rifles) and Accurate Arms. On the bench, the brass is rather fragile and the nickelled cases are to be avoided. Designed for black powder, the generous case capacity lends itself to bulky powders such as Trail Boss.

Classic comps and CAS offer ongoing action for your rifles, whether ancient, old or new, but take care to establish the safe load pressure limits for the model in your armoury. Be warned, this may be your necessary introduction to bullet casting!