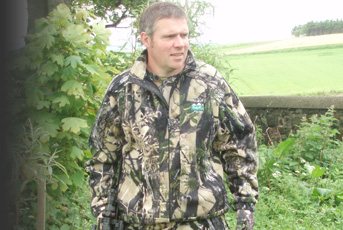 I am a very active shooter in the Scottish Highlands, covering five or more miles on a days shooting, going up and down hills through deep snow or thick undergrowth. All of this physical activity is hard work and requires the right kind of clothing to allow the range of movement involved in such exertions, so I was particularly interested to receive a hunting suit from Ridgeline that can best be described as a camouflage fleece tracksuit.

Comfortable Camo From The Land of The Kiwis

The suit comprises of action trousers made from thick fleece with a drawstring waist, a micro fleece shirt, a very thick ‘Aoraki’ fleece jacket and a fleece beanie hat for somebody with a much smaller head than mine!

The first thing you notice when you put this gear on is the sheer comfort, due to the fact that nothing is tight or restrictive and the fleece from which all the garments are made has a large degree of ‘give’ in it. The level of free movement the Ridgeline suit offers is unique amongst shooting clothing, I have never come across anything like it before. It is obviously designed for serious physical activity which is not surprising as it is a New Zealand made product, and in that country hunting is quiet often combined with serious trekking up steep mountains or into dense bush after such quarry as wild pig and wapiti. But this country too has its extreme challenges like hunting deer on the wild hills of the Scottish Highlands, and for such environments where serious physical exertion is part and parcel of the shoot, then you will not find a better designed hunting suit than the Ridgeline, you could literally run up the hillside in it if you took a mind to.

The fleece suit is not waterproof but it is incredibly warm and windproof , being sufficiently snug to deal with the coldest conditions any shooter could face in this country.  In fact it would be perfect for wildfowlers who lie out in the cold for hours worn under a waterproof layer, as wearing this suit is a bit like being covered by a duvet.

Though it is not waterproof, getting caught out in a down pour is not really a problem as the fleece is that thick that the rain takes some time to come through and even when soaked through the suit does not lose its thermal properties.

The Buffalo camouflage pattern may not be one that you are familiar with and that is because it was designed on the African veldt, so it is a much lighter coloured camouflage than we are used to in this country. It has been specially designed to remain effective in low light conditions when darker camo patterns have a tendency to merge into one mass.

I have tried the camo in several different environments and light conditions, and have found it very effective at breaking up the outline, keeping me well hidden from the sensitive eyes of alert quarry.

As the suit is made out of fleece it is of course entirely silent, making it the ultimate in stealth wear. I have to say this unique suit has really impressed me, especially when you consider that the whole suit – comprising Aoraki jacket, trousers, shirt, and hat - can be purchased in a ‘Hunters Pack’ for less than £100 in sizes from S-5XL.