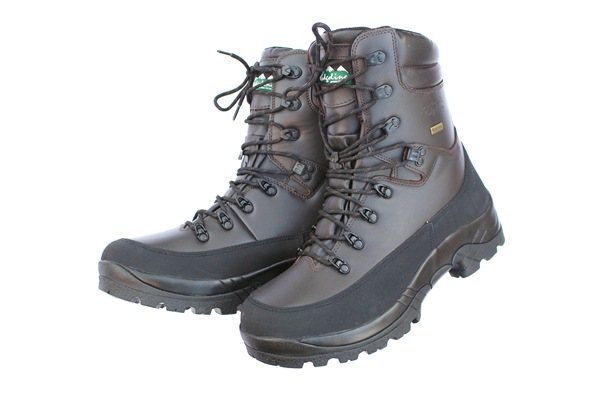 The Warriors are of a very high standard by way of their sturdy and strong construction, rugged soles plus the amount of extra padding and protection given at key areas. Measuring 10 1⁄2” at the front (including tongue) and dropping to 9” at the rear they fall firmly in what are generally termed a ‘high leg’ design. The boot is mainly manufactured from full grain wax leather which has been treated to a waterproof outer.

To ensure total weatherproofing incorporated into the build is a Hydro Guard membrane and a very generous Thinsulate insulating liner. This will ensure your feet are kept warm and dry in even the worst conditions. The lacing system compliments the tough and rugged design. All lace retainers are manufactured from metal that’s treated to be fully weather resistant. These include four pairs of captive eyelets and a further four pairs of speed hooks. The former are riveted and hinged so allowing them to articulate to allow the boot to be drawn firmly into position, which also evens out the tension applied.

There’s also a ‘lace guide retainer hasp’ set approximately half way up the generously padded tongue. This also translates over to enabling the tension of the laces being able to be relaxed more efficiently when the boots are untied so coupled with the open hasp speed retainers getting in and out of the boot is made far quicker and easier.

This rubber composite sole is actually given a name – Hyper Grip – which it lives up to as it really is very ‘grippy’ even on slippery surfaces. In fact the company make a point of stating: ‘the sole has been especially developed for Ridgeline to offer the wearer secure and positive foot placement on surfaces that would normally be inaccessible.’

To sum up I’d say the Ridgeline Warrior EXP Boots are amongst the most rugged, tough and hard wearing hunting footwear I’ve tested and if you require a high level of protection from both terrain and weather then they’re definitely the ones to consider!

FOR: Tough, robust and practical
AGAINST: Not a lot
VERDICT: They offer the wearer a high level of protection and comfort Bit heavy for some