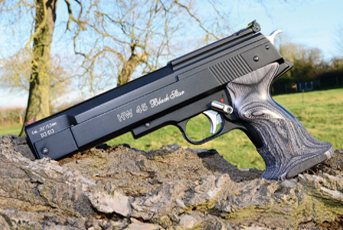 Getting to ‘play’ with the world’s best air weaponry is hardly a chore, and most of the time, I can’t deny, I love every minute. Most guns are tested over a relatively short period, (normally a few weeks), and whilst I obviously get a full idea as to performance capabilities, long term reliability is rarely assessed. You do largely get what you pay for where airguns are concerned though, and the higher quality brands should stand the test of time better than inferior makes.

On test here is the latest version of Weihrauch’s highly popular HW45 model, and this is one gun which I really can vouch for, since my father has owned the pistol in standard format for well over twenty years. The ’45 is aimed at shooters who appreciate quality, and expect a good level of performance, yet don’t want to go to all the expense of full blown match kit.

Whilst the differences between this new version of the HW45 and the standard original are largely cosmetic, the new Black Star is a real eye pleasing beauty, with an impressive spec list. First impressions are of a superb looking specimen; built to do a job yes - but also worthy of a display cabinet!

It sports much the same action as the standard HW45, which not only means its loosely based upon the classic Colt 1911, but also that Weihrauch’s top class engineering is much in evidence. That distinctive profile looks the part, but this pistol is basically built to last, with precisely formed components and supreme design coming together. The end result - an incredibly versatile pistol, brimming with character.

A special wooden laminate grip is fitted to this new version, whilst a further classy touch comes with the silver satin finished trigger, hammer and safety catch. Fibre optic sights, and the pistol’s name picked out in silver, complete the Black Star spec, and everything comes together nicely, to make this model a genuine special, and a worthy edition to the product range.

The ’45 is a spring/piston powered model, which utilizes the up and over style of cocking, in much the same way as old Webley classic pistols. It’s cleverer than that though, and the big ace up its sleeve, is the fact that it is capable of two power levels! Pretty impressive on paper then, so let’s take a detailed look.

Let’s Start With The Finish…

That superb blue grey laminate grip of course steals the show, and it’s not only practical, but extremely comfortable. Formed from a single block of bonded laminate, the design manages to be fully ambidextrous, while offering a finger/ thumb shelf and flared palm rest. Extensive fine stippling adds extra feel, and overall, it just looks the part. If I wanted to nit pick, I’d point out that in keeping with the standard model, the hand still comes into contact with some cold steel, but in practise, it’s difficult to find fault.

As for the metal work, all the action is treated to a matt parkerized finish, and contrasts well with the silver components.

As mentioned, the over-lever cocking action is reminiscent of classic Webleys of yesteryear, and the routine is as follows - pull back the ‘false’ hammer spur to release the top carriage. Grip the top section of the action firmly (which contains the barrel assembly) and pull it up and over until the trigger engages. At this point decide if half power is wanted (when the top lever section is at right angles), or for full power keep pulling all the way forward through an arc of about 140 degrees.

As mentioned, I’ve considerable experience with the HW45 in general, and to be honest, the action shoots so much sweeter on half power, that for me, it’s an easy choice. That said, on full power, these models kick out near legal limit velocities, and the distinct additional kick felt, will add something to the sensation of firing for many.

A dry fire option also exists with the ’45. Simply pull back the hammer, (which releases the top section of the action), then just snap the top section closed again, and the trigger can be tried in ‘dry’ mode, without actually cocking the action.

Over the chronograph, this .22 test example managed 3.5ft/lbs at half power, and good consistency over a ten shot string. On full power, the action achieved an impressive 5.9ft/lbs, and a text book ten shot string within 8fps.

Accuracy testing was undertaken using the open sights, and the provision of fibre optics made the task highly enjoyable. Fibre optics seem a strangely radical step for Weihrauch, given the company’s ultra traditional image, yet they seem wholly in keeping with this new model’s bold styling. There’s no denying their real world advantage either, since they create a super clear sight picture, even in poor light. The foresight is formed from a single red filament, whilst the twin yellow dots fixed to the rear sight are effectively adjustable via the standard sight base. Yes a screwdriver is needed, for both windage and elevation, but the deliberately low profile, ultra robust design means that the sight shouldn’t be damaged, despite sitting exactly where the cocking hand will fall.

The fully ambidextrous safety catch is a manual design on these pistols, which is a good thing in my book, as I prefer to fire off the shot rather than trust a safety device. Trigger wise, Weihrauch did a superb job with the ’45 right from the start, and these 2-stage units can be set with a fairly light first stage, and commendably precise second stage release. Add into the equation that wonderfully shaped, super broad blade, and its little wonder that this unit has stood the test of time.

One way in which this latest version differs from my father’s, is the chamfer that Weihrauch now machine into the breech. Loading JSB ammunition was noticeably easier, as the pellet just slides into the breach with little resistance. Cocking the action takes only modest effort, and the half power stage is unsurprisingly less effort.

As for the firing cycle, full power, as mentioned, does introduce more of a significant kick, so the pistol becomes just a little harder to shoot. However, it’s great to have the option, to effectively extend the range. Variable power brings versatility, and this is a wonderfully versatile product at the end of the day.

It’s rewarding too, and with accuracy of around half inch at 10yds using the open sights, and approximately an inch at 20yds, the potential is there for sure.

As mentioned at the beginning of this article, I really can vouch for the sound mechanics and engineering on offer here, since my father’s standard HW45 has seen some regular use (and some hotly contested competitions) over the past two decades. It’s never been serviced or touched in any way, yet it’s as smooth and reliable as ever, and a credit to the original design.

This new Black Star version carries all the same internals, and subtle features, yet with those stunning grips and added detail, it’s another mouth watering prospect, from one of the biggest names in airguns. GM