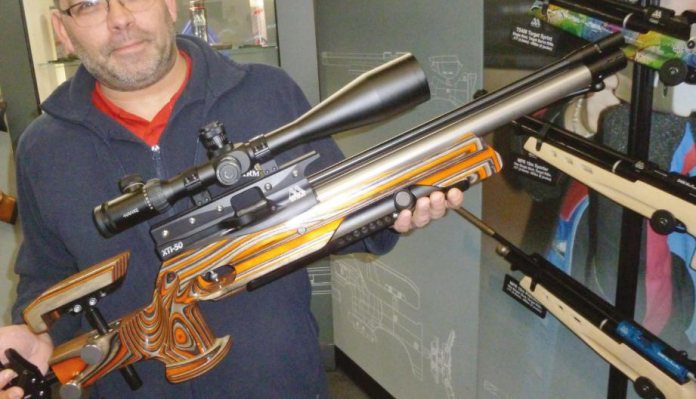 Without doubt the biggest crowd puller at BSS 2020 was a sight of Air Arm’s latest flagship PCP; the eagerly awaited XTi-50. Now, let’s make one thing clear; this model hasn’t yet been signed off by the company and is technically still under development. Yet one gets the feeling that the boffins behind this mouthwatering design, are getting close to the specification, which will most likely make it into the production stage.

Replacing the FTP900 naturally places great demands upon the designers, and with their legendary EV2 still winning far more than its fair share of silverware on the Field Target circuit, there’s much to live up to. Expectations are understandably high, but with a few prototypes in the hands of the Air Arms FT team, among others, for field testing and evaluation, real world feedback is clearly the name of the game.

Air Arms’ success has come from a combination of factors over the last few decades, but it’s that willingness to listen to technical advisers and technically gifted enthusiasts, that has won them an army of fans and a haul of silverware in top outdoor airgun competition around the globe. So, what will we get with the XTi-50? Well, if you’re an FT shooter, the extendable and adjustable Hamster section represents a no-compromise approach to design and will allow full control and support for any difficult standing or kneeling shots required.

Look to the rear, and the metal butt hook assembly again offers an incredible degree of adjustment, to satisfy the most demanding. Offering as it does multi sectional components, that replicate such market leading accessory makers as System Gemini, for example. Stunning laminate woodwork includes twin thumb shelves and a palm rest, obviously an adjustable cheek piece, and almost certainly ball joint connectors.

Moving to the action, there’s a top-class match trigger, and a titanium air cylinder, which adds an instant touch of class. An all new regulator is already causing a stir for its impressive consistency and as for that flowing receiver, (at first glance similar to that of the FTP900, but actually all new) it’s another exercise in fine CNC engineering. A free-floating barrel features, as does an all new air stripper design. But the burgeoning specification really takes off with the addition of a stabiliser system, built in around the breech/ bolt area; and designed primarily to even counteract the movement of the pellet on firing. Here, Air Arms take on the likes of rivals Steyr and Anschutz, and it’s this level of detail that should really elevate the new model.

Obviously, a silky slick side-lever goes without saying, and a level of machining and finish to rival anything out there, can also be expected, showcasing just what the company is all about. As previously mentioned, they have stressed that they may still fine tweak detail before this piece of delicious performance art goes into production. So, when will it be released? Good question. Air Arms are determined not to promise what they can’t deliver, so nothing is confirmed as yet. However, my spies suggest that sometime in late Summer could be favourite. So, do I need one? Debatable. Will I get one? Well, I wouldn’t bet against it! One thing is for sure: from what we’ve seen so far, it’s going to be something quite special.