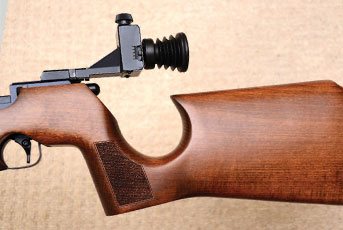 Indoor target rifle shooting has of course benefited from the knock on effect of the Summer’s Olympic Games; as have many sports across the board.

As an equipment based sport however, the initial investment required to gain a foothold
onto the 10m match shooting competition ladder, can prove a massive turnoff for many. Full blown target rigs, certainly from any of the big German companies, will easily set you
back a couple of grand upwards these days, so anything that can encourage more shooters to get involved, must be a good thing.

Attitudes at club level play a part, and the first one I joined, was of the target variety. Allowing us novices to turn up and shoot break barrel springers (even scoped up on occasions), alongside shooters with more appropriate equipment, demonstrated the all inclusive atmosphere. But it also went a long way to cementing my lifelong love affair with airgun sports in general. If they had insisted on target gear from the off, my interest may have died there and then.

Top British airgun manufacturer, Air Arms, are only too aware of the importance of attracting a new intake to the shooting sports in general, which is why their current range of products appeals to shooters right across the disciplines.

On test here is the dedicated target version of their highly popular S200 model, and with an RRP in the region of £421, it seemingly represents astonishingly good value. So let’s scrutinize the package, and see just how it shapes up for the money.

Amazingly, having checked my records, this is the first time I’ve tested an S200 in any capacity; and it’s a timely reminder of just why the S200 series in general, has been such a runaway success since its introduction.

Whilst the majority of models from Air Arms are manufactured in their state of the art facility in Sussex, the S200 is actually produced in the Czech Republic, by Ceska Zbrjovka, or CZ as they are more familiarly known. CZ have produced top class barrels for some Air Arms models, at various times, and the S200 is one of the models produced as a collaboration between the two companies.

My test model is the dedicated target version - the S200T, and as an overview, this rifle is a single shot, bolt
action, pre-charged pneumatic, with a target style beech stock and target style open sights, supplied as part of the package. It’s relative light weight makes it suitable for shooters who may otherwise struggle to handle the larger, heavier kit that is quite common in this discipline.

Ambidextrous woodwork is all the rage these days, and I’m not averse to this trend when it doesn’t significantly compromise handling. The semi-target stock here is fashioned from beech, and with a nicely scaled down, 90 degree pistol grip, (incorporating a flat thumb rest) and a highly prominent cheek piece, great handling is a given. The design also includes a super sleek, fully extended fore-end and a discreet butt pad; all adding to the compact feel overall, that
has contributed greatly to the appeal and popularity of the S200 in general, and particularly with ladies and juniors alike.

With regards to the action, Air Arms have designed the main air reservoir on this model to be removable, but unlike most of the German target weapons, cylinder removal here isn’t necessary to charge the gun. It can never be preferable to have to remove a major part of any rifle on a regular basis, especially just to charge the system! But in the case of this S200T, the valve sits at the front of the cylinder, so the valve cover can be removed in the normal way, the air supply connected, and the cylinder then filled to the recommended 200bar. With Air Arms now familiar ‘T’bar valve fitted (surely the safest design on the market) peace of mind is assured.

The S200T is aimed specifically at close range 10metre target shooting, so high power isn’t necessary. With this in mind, and in keeping with other target grade kit on the market,

the action’s are set to a lower power setting of around 5ft/lbs. Lower power of course means more efficient use of the air supply, and Air Arms quote this model as producing around130 shots - which is plenty for an extended practise session, and a match programme combined. I’ll get to my test figures shortly, but before that, the small matter of setting up the sights is necessary.

Target style guns such as this S200T use the Diopter sight design (supplied with the rifle) which, for those unfamiliar with it, requires the shooter to look through a small aperture at the rear (which takes the form of a small pin hole in the centre of a rubber eyepiece). The shooter actually has three factors to take into account, as he/she views the round of the target through the fore-sight element, and finally through the aperture window itself. The art is to perfectly centre the target within the foresight and within the aperture - keeping everything central and equidistant to each other. In practise, it all falls into place after a while, but when you bear in mind that the top exponents of 10Metre are capable of hitting a bullseye just half a millimetre across, on a regular basis, you can begin to appreciate the level of skill needed. The fore-sight incidentally allows for interchangeable elements, whilst the Diopter at the rear is fully adjustable via very precise finger wheels.

Pulling back the nicely weighted, comfortable cocking bolt reveals the loading channel, into which a pellet can be rolled and then pushed home. The trigger on this Target model is the same unit which features on the standard S200, and it’s pretty damn good. It’s capable of fairly light, totally crisp and predictable release. My only reservation concerns that slightly fragile looking two part plastic blade, which is also fractionally too narrow in my book.

Over the chronograph, and using the ubiquitous JSB’s (AA Diabolo Field), my figures showed, from a 200bar fill, 126 shots within 24fps, before the velocities went below the initial figures recorded. For the record, at this point a residual pressure of around 80bar was noted. Excellent figures in my book, and evidence enough of the impressive and usable shot count.

Balance really is good with this rifle, with a bias to the muzzle, and whilst personal taste plays a part, if I felt at home, with my large frame, then I reckon the verdict has to be that this S200T is nothing if not versatile.

Not having shot with a Diopter sight for a while meant that the zeroing session was best completed from a rest, but with everything set, and after a short familiarization process, I punched some seriously satisfying results, all from a freehand standing position. I’m no Olympic 10Metre man, and my standing technique is questionable at best, but the S200T flattered, and I retired with a smile on my face.

As the price differential between the S200 and its stable mate, the S400, has narrowed over the years, I personally can’t see why anyone would opt for the S200 over its more distinguished big brother - if considering a gun for hunting or HFT for example.

But once the end task is specified as ‘indoor target’ however, the game changes. That dedicated, target stock configuration, coupled with the well made, fully adjustable match sights, fine balance, and a good trigger, combine to give the S200 the spec to see the job through. Of course it’s a simplified format, when compared to many full blown target guns, but as an
entry level model, the S200 serves as the perfect introduction to this highly competitive world.

Well made, compact and perfectly formed, sums it up nicely; but the S200T is so much more, having earned its place in the product line-up on merit. A user-friendly format, and an impressive performance help this gun punch well above its weight- and all for a fraction of the cost
of much of the opposition. GM