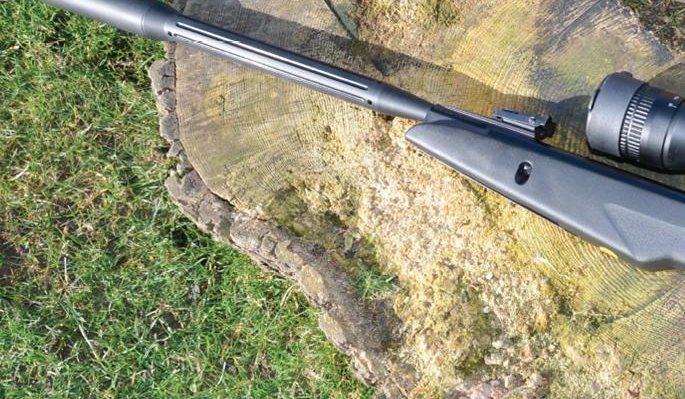 Synthetic gunstocks have been with us for some time now, and the black ‘tactical’ option has of course become ultra trendy in today’s airgun marketplace. No one has embraced this development more than Spanish maker Gamo and their designs have become increasingly radical over the years. The model on test here is a prime example of the art and fully exploits the free hand afforded by moulded plastic compounds. Where thin strips of wood would create a weak point in a conventional stock, no such drawback exists where synthetics are concerned. Bold configuration is just the start though, as this Gamo Whisper Fusion offers several supposed improvements over earlier models.

That full length, barrel shroud and integral silencer grab the eye from the off, and they form the basis of what Gamo term ‘Whisper Fusion Technology’. The design sees the muzzle blast pass through a multi chambered system, which should absorb and diffuse it to acceptable levels. More of this in a while.

Open sights are an important inclusion on any rifle that may be taken up by beginners, and with this Gamo so keenly priced, it’s more than likely that a mix of shooters will invest in one. Fibre optic varieties are great since they guide the eyes, as they make use of all available ambient light. The rear sight is small but perfectly formed; offering a conventional U-notch incorporating green fibre dots each side of the notch and is fully adjustable by twin thumb wheels. Up front a red insert on the fixed blade in an open topped, protective tunnel.

Decide that this highly capable rifle deserves glassware, and Gamo have that covered too, with a raised scope rail complete with arrestor stud. This robust design works well but does make the sight line higher than straight machined dovetails. As with any break-barrel, just take care that any scope fitted clears the breech face as the barrel moves through its arc.

Cocking is extremely easy, due in no small part to that classic Gamo synthetic breech/ barrel liner arrangement. I’ve been impressed with this set-up before, and the way that barrel locks up is a delight! As mentioned before, Gamo’s ‘Whisper Fusion Technology’ is here, yet despite a fairly muted muzzle report, the rather twangy, slightly harsh sounding action itself, overrides any benefits. Internal dampening, or lack of it, is the weak point of several modern Gamo’s, and it detracts from some otherwise highly impressive features.

Features such as S.A.T. for one. Airgun manufacturers do love their acronyms, and this one stands for Smooth Action Trigger. It’s a great improvement over their old design and now features across much of the range. I really like the ultra light first stage and whilst admittedly there’s some creep on the second, overall, the feel and control is wholly satisfying on a rifle in this price bracket. A manually-operated safety sits inside the trigger guard incidentally, and for those interested, the Whisper Fusion can’t be de-cocked, so will have to be shot empty!

So what of those garish looks; do they get in the way of proper gun handling? I really like that sloped forend, and the swell at the mid point seems to provide natural support and purchase. Undoubtedly a distinctive profile then, but whilst the forend looks stylish and that shape overall is spot on, the very tip is a little too thinned so consequently a little rough on the fingers in the aim. Nit picking maybe, but it would take little to add slightly more beef to the moulding at the manufacturing stage.

Look to the butt section and you’ll notice another technical feature- Gamo’s ‘Shock Wave Absorber’ system, with removable rubber blocks inside the pad. The idea is that these can be removed as desired, to supposedly alter the recoil. It certainly looks neat, but having spent time playing with various options, I can’t say I noticed much difference. Where the super raked pistol grip and angled forend are concerned though, I reckon this Whisper Fusion handles very well. Again, the option of a small thumb shelf would add nothing to the production cost, and would give an alternative to the thumbhole grip, yet the feel and handling is still well above average.

My first choice of ammunition these days has to be JSB’s, by virtue of their phenomenal consistency of manufacture. I do try other brands and makes of course, yet invariably arrive at these market-leading pellets. OK; not everyone wants to spend full price on lead, especially when the rifle is nearer entry level price levels; but it would hardly be a fair evaluation of potential accuracy, if I failed to try what is widely regarded to be the best ammo around!

Fair comment? I think so, yet this Gamo was none too impressed with my proven batch of Air Arms Diabolo Field; printing 1.5” groups over the 30 yd test range. That level of performance would still be fair, given the Gamo’s price tag, but as always, if satisfactory results aren’t instantly attainable, I’ll experiment with alternative brands. RWS Superdomes in .22 proved a much better choice here, printing ¾” clusters over the same distance, and proving once again, the unpredictability of airgun barrels.

For the record, consistency with both pellet brands was superb, with variations of 5-9 fps over the respective 10-shot strings over the chronograph. Just stop and absorb those figures for a minute; 5 fps extreme spread when velocity output is around 560 fps and you have to conclude that that’s astonishing consistency levels.

Accuracy with the right pellet was impressive on test too, and all at a price that shouldn’t break the bank. OK; maybe forget all the over-hyped marketing tag lines about shock wave absorbers and the like. Just see this eye catching Whisper Fusion for exactly what it is; a highly capable and likeable, full powered sporter that would make a cracking beginners gun or general purpose hunting rifle.