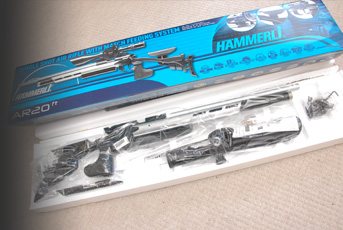 Field Target Shooting has gone from strength to strength over the last couple of decades, with a national network of clubs and tournaments, spreading the word to an ever wider audience.

A World Championship title is keenly contested, and the fact that such an event is now rarely staged in the UK is testament indeed as to the genuine worldwide popularity of FT, as a growing number of countries now get involved.

Taking part in our flagship outdoor airgun sport, however, can require some significant investment, especially when supposed top class match rifles are selected. With many top models hailing from Germany, recent exchange rates have hardly helped matters - and an outlay of £1500-£2000 is not uncommon.

Walther are obviously serious players in this market sector, and their own target models such as the Dominator, command a high price from enthusiasts, so I was surprised to see the release of this new AR20FT model, under the Hammerli brand name, since this famous old name now sits within the Walther company portfolio. On the face of it, this AR20 seriously undercuts, not only Walther’s own top models, but rival contenders too. Offering a regulated PCP action, in a highly functional composite/aluminium stock - it simply bristles with features; all primarily aimed at the competition shooter

Obviously with a company like Walther behind the scenes, it’s reasonable to expect a well thought out, end product. Having now spent some time fully evaluating this AR20FT, I can report that it not only delivers on that score, but also represents astonishing value for money, when compared to most of its rivals. Just listen to this; my test sample was delivered complete with a factory endorsed Walther FT 8-32X56 scope, and retails for £695 complete. The rifle is however, available on its own, for £595, meaning, that at the time of going to press, that scope (and mounts) is being supplied for just £100 extra!

FT demands certain properties from a scope, such as high magnification and parallax adjustment. This Walther has an ideal spec, providing a maximum mag of 32x, and from initial testing down range, performance seemed fine. As is so often the case with this style of scope though, the factory set range markings (on both the side knob and extender wheel) came in a few yards adrift from the actual target ranges viewed. What matters however, is consistency, and range-finding came in to the same mark on the dial. In the real world, any competitor is best to take the time to add their own tried and tested fine markings to the wheel; calculated over several shooting sessions to ensure accurate readings.

This scope comes complete with mounts and even a Picatinny rail (if your mounts don’t fit the dovetail rail on the rifle). This means the action can start pretty well from the off. Turrets are of the target variety and turn with reasonably positive clicks. Setting turrets to zero once adjustment is complete, is carried out via the unusual system of pushing down the turret (thus disconnecting from the spindle), then twisting round to the ‘0’. Those all important graduation lines at the base of each turret offer an invaluable indication as to how many revolutions the turret has been dialled through; thus allowing the shooter to keep a firm check on adjustments and impact point. Having witnessed several shooters commit the classic error of having wound their scope turret round an extra revolution without realizing (and subsequently missing the next target by miles), I can appreciate this subtlety on a scope.

Finally, a Mil Dot reticle completes the specification, making this Walther glassware great value as part of the package.

The surprises don’t end there though. Take a moment to list all the features that you would expect to find on a full-blown Field Target rig, and this Hammerli just about sums up the blueprint. Shrouded Lothar Walther barrel, fully adjustable match trigger, adjustable grip, butt and cheek-piece. Adjustable fore-end, counterweight system, and ambidextrous chassis and loading. If that sounds an impressive list, you’d be right. Take another glance at that asking price, and it seems incredible

So let’s take a closer look at this fascinating new contender; then see how it performs down range, where, when all’s said and done, the battle is really won and lost.

Fashion or trends dictate up to a point in the shooting world, as they do in most walks of life; and the AR20, with its cast aluminium main chassis, takes its inspiration from the likes of Steyr and Walther’s own target models. Lovers of finely grained walnut, will obviously need to avert their eyes, but if maximum performance and rifle ‘fit’ are the driving forces, then this style of ‘Robocop’ stock ruthlessly delivers; albeit in a utilitarian fashion. Dovetails run along the full length of the top of the aluminium section, so the positioning of a scope is simplicity itself.

Whilst the butt, grip, fore-end plate, and cheek-piece are all made from composite, the quality of moulding is excellent; with the result that everything feels functional, yet refined. Walther supply a multitude of accessories with this model, and as all-inclusive packages go, it takes some beating. With this style of rifle, and the plethora of adjustments on offer, the first stage is always to just sit down on the range and see how everything fits. If the length of pull isn’t right, just remove the rubber butt pad using the allen keys supplied, add in a few extra spacer blocks as required, then re-tighten the butt pad in place. Likewise, with the cheek-piece. Simply slacken the allen bolt and raise or lower as required, until scope/eye alignment is spot on. It should be noted at this stage that the whole system is totally ambidextrous, with the cheek-piece itself, just needing to be slackened off, pulled completely from its slot, turned round and then replaced within the slot, and by so doing, caters for left handers. All other features are symmetrical, even down to the double sided cocking lever.

Just in front of the butt pad sits two counterweight blocks which can be removed as required to fine-tune the balance. Overall weight of the AR20 incidentally, is significant at 8.8lbs unscoped, yet comfortably less than many other target models on the market. Weight is nicely biased towards the front, with the centre of balance around 3.5inches forward of the trigger guard, although first impressions are that the AR20 feels as though it weighs more than it actually does.

An adjustable fore-end plate (Hamster), can be positioned anywhere along the full length of the underside accessory rail, whilst those same spacers can be added here too to increase depth. In other words, personal positional preference and differing body builds, are all catered for. One final tweak to the physical structure comes with the fact that the grip can be rotated around its axis – again, once the retaining bolt is slackened off.

Triggers have always been a long standing passion of mine, and a fully adjustable, full blown match unit represents the holy grail in this area. This Hammerli comes fitted with a highly capable unit, offering as it does, the potential for light release pressures, along with full positional adjustment. The trend for small ‘rods’ in place of a broad flat blade, isn’t to my taste, yet many shooters seem to favour this development. The ‘finger piece’ as Walther term it, can be moved along a bar, thus increasing or reducing the reach; whilst the breaking point, weight, stopping point, and finally slack, can all be altered to suit the individual.

Charging this Hammerli requires the cylinder to be unscrewed from the action first, and whilst this system is still used by a few manufacturers, a quick fill system whereby the air supply is linked to the muzzle end of the cylinder whilst in situ, is preferable. Having to unscrew a major component of the rifle and remove it - just to charge the system - is never ideal, but having the cylinder adapted for quick-fill by a competent engineer, is a relatively simple process - and indeed a task regularly undertaken in FT circles.

As supplied here, a brass adaptor is included, which screws straight into the cylinder; but since the receiving end needed an inch threaded (or thereabouts), female side, I soon realized that no fitting on my charging gear was usable. A quick call to the specialist outfit, Best Fittings, and the necessary parts were kindly sent on their way. In practise, many bottles may well have the necessary receiver, whereby the adaptor as supplied by the manufacturers, will be perfectly sufficient.

With the prescribed 300bar now onboard, it was time to check shot count and consistency over the chronograph. For some reason, I had given the reasonably compact cylinder the once over and assumed a fairly low capacity, but I was wrong. Some while later, and I stood corrected and in awe of the finely regulated action, that had returned some 170 shots, all within 24fps (or +/- 12fps). Discount 7 of those, and total spread was more in the region of 15fps. In short, this AR20 can cut the mustard when assessed for consistency - all using Air Arms Diablo pellets straight from the tin I might add.

Down range, accuracy was to be assessed firstly over 35yds, then the rather more punishing 50yds; but let’s face it - any rifle hoping to be taken seriously in the demanding arena that is FT, has to be able to group at the outer limits. Air Arms pellets, along with Defiants, grouped well at both ranges, with the JSB manufactured AA’s just edging it overall. All important half inch groups at the full distance, were relatively easily achieved, leaving me impressed by both balance and feel of this most capable of rifles.

So any negatives to report?  Well apart from the removable cylinder issue as mentioned, I felt that the breech area, whilst utilizing a conventional bolt arrangement, could have been fully relieved, so as to allow for full direct access to the breech. Thumbing home the pellet manually is the ultimate loading method, allowing for the ‘calling of a shot’ where a bad fit is felt. This missed opportunity apart, functionality is extremely good.

In short, I really enjoyed my time with this AR20. I reckon it offers an impressive list of sophisticated features, laid bare if you like, in a gloriously straight forward, simple to understand format. Oh and it can string together some half tidy groups too!

If my test sample is anything to go by, I reckon Walther clearly have a winner on their hands. It’s a great performer under any circumstances, but offered at the current prices quoted, it seems staggering value for money too.