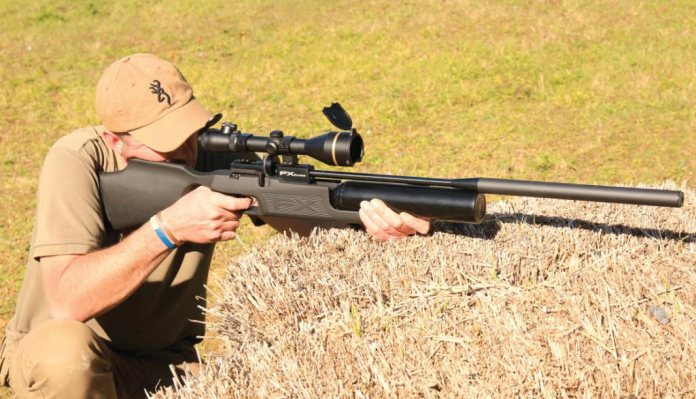 I have to admit to taking a deal more interest in air rifles recently; even going as far as deciding on a Bullpup, multishot PCP in a 12 ft/lb version, as I reckon it will add a new dimension to my shooting! And a recent article by Mark Camoccio on the new FX Wildcat got me thinking.

Speaking to Edward King (MD) of A.S.I. (FX importers) got the promise of the loan of a Wildcat when one becomes available; apparently they are selling like hot cakes. He also asked if I would like to test the Boss, which is a seriously, FAC-rated, .30 calibre gun. I was intrigued, as we are talking energy levels getting near 22 Rimfire.

The Boss arrived and it was hard not to be impressed! It’s a big bugger at 47” with a 23” barrel complete with integral, reflex moderator that covers half of it, and a one-piece thumbhole (TH) stock. It’s not that heavy, tipping the scale at 7 lbs (synthetic stock) and 7.5 lbs in laminate or walnut furniture. I had the former, which is a flat grey and gives a sort of soft grip feel, which is most practical! It’s not the prettiest of rifles and without doubt the wooden versions look better!

The TH layout is well designed, giving a lot of head support, with a grip big enough for a decent hold, along with a generous thumb cut-out. The butt pad is adjustable, so you can tailor your position. The pistol grip is grooved, as are the sides of the abbreviated forend, which is done to allow the fitting of the large 500 CC, fixed air cylinder, which as we shall see is needed.

The filling point is under the forend, with a small manometer to the rear. The system uses a QD connector, which the rifle comes with and as others have commented on FX guns in the past, there’s no cover! The action is a side-lever mechanism with a 90° downwards handle on the right, and it feeds from a 9-shot drum magazine, which initially is a bit quirky to fill. It’s inserted and removed from the right side and retained by the pellet prod when the action is closed.

Rear right of the action is a 2-position rolling safety lever, well positioned for the firing hand thumb – forward to FIRE and rearwards for SAFE.

The long, aluminium action block shows an integral 11mm dovetail, so no problems with scope mounting. The drum magazine stands a bit tall and you will need medium/high mounts to suit, for the test I fitted a Leupold, 3.5-10x50 VX- 3L in Sportsmatch 30mm mounts, which proved ideal.

The barrel is a match-grade, smooth twist type, which gives a smooth bore, with just the last few inches rifled and certainly proved accurate! With the moderator/shroud removed you can see that it’s about 4” longer than the barrel. This offers a forward of the muzzle chamber and a long rear expansion-type tube, I was unsure as to its effectiveness, but it worked well! What did impress was the fully adjustable match trigger. The blade is a vertical post, with a curved finger pad section, which can be rotated and slid up and down to suit. Equally, it’s possible to move the post back and forward too and the break took some getting used to, as it’s LIGHT at around 7oz!

The calibre is .30”, which is not small, and uses a .308”, 46.3-grain standard dome headed/waisted slug with a ballistic coefficient of 0.115; almost like someone made it for a joke. However, performance was no joke, as this is one accurate and powerful gun with some serious reach!

The action is regulated and FX claims a shot count of 40+ full power shots. The fill is 250 BAR and as I discovered, one magazine’s worth of nine pellets uses up 25 BAR. I initially kept topping it up, thinking I’d soon lose power and it was a bit of a struggle for my 300 BAR, 4-litre tank I got second hand off Henry Kranks. It came with a very short whip lead, which proved awkward to use, so a call to Best Fittings got me a 1000mm hose with QD coupler and a quick coupler set, so I could set it up for other guns. I also treated myself to one of their carry handles and bottle cradles; two useful items no doubt!

I decided to bite the bullet and filled to 250 BAR and proceeded to shoot full magazines over the chrono, noting speeds and pressures. Well I got five mags worth out of the Boss, that’s 45-shots running an average of 853 fps, which gives an impressive 75 ft/lbs. The extreme spread (ES) was a pleasing 10 fps, overall more than enough for any hunting trip and then some!

I found a YouTube clip showing the Boss being used to shoot prairie dogs out to 150 yards and it also talked about killing coyotes too. This is what really intrigues me about FAC-rated air rifles – their ability to do what 22 rimfires can; I reckon if you can kill a fox with a 22 sub-sonic out to 100 yards with a well placed shot, that .30” cal pellet could probably do the same! OK a 40-grain, sub-sonic is averaging 1050 fps/99 ft/lbs at the muzzle and the Boss has less speed and energy but a much bigger pellet, and it kills rabbits effectively; maybe more so than a 22 sub!

OK, enough of supposition, let’s get back to the nuts & bolts! Filling the magazine is a bit odd when compared to others. Remove the magazine and reverse it so the front plate is facing you. Then rotate the plastic cover plate anti clockwise and hold it there so that the aperture is exposed, then drop a pellet in base-first. Now turn the mag around and rotate the cover plate to expose the chambers and drop the slugs in – nose-first. Open the action to retract the pellet prod and slide the mag in, then close it to chamber the first round.

Sadly I had used up all my ammo on testing and a call to A.S.I. got me another tin. However, I did not have long to shoot them, as the Boss had to be back for the Tackle & Gun show, so the fieldwork was a bit short. But I had success the first night out; I was staked out 50 yards from some game cover and I spotted a rabbit at 70 yards on the adjacent track, which was swiftly joined by another. The drop was 2.27” and I placed the cross hair just over its shoulder and squeezed that super smooth trigger.

There was a sort of ‘SPROING’ noise and with a loud meat slap when it hit #1 spun over, gave a twitch and lay still. His mate just looked at him, I reckon the slow moving pellet and the Boss’s moderator gave little signature at that distance. Well beggars can’t be choosers and I swung onto #2 with identical results. I got a third about 20 minutes later at 55 yards just as the light was fading so overall most impressed. All were textbook, behind the shoulder shots and the authority of that heavy, 46-grain pellet was self-evident!

After that first outing I would be confident out to 100 yards and if I can get the rifle back will push it out to 150 to see what occurs; though wind would be the killer. Out of interest, I tried a shot with the moddy off; which was loud! Yes that big can makes the Boss a tad unwieldy in some situations but it does a job 100%. No real complaints, though I’d get a bottle cover as your hand grips the metal and not the forend. This test has got me thinking that maybe I should go for an FAC-rated Wildcat, not the power or calibre of the Boss but say a 22 doing around 25/30 ft/lbs; decisions, decisions!