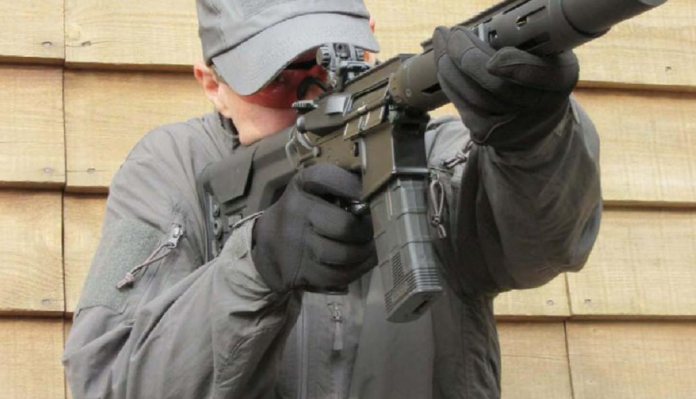 I’ve been working with ICS replicas since the mid-90s and I have to say that they offer some of the most consistently reliable airsoft replicas out there; they may not always have been ‘cutting edge’ in their design but they’ve certainly been functional! Some airsoft companies seem content to just follow a single line of thought in relation to their designs but I have to say that in the past couple of years, ICS have not done this in any way. I’ve always been a fan of their split gearboxes, which are reliable and easy to work on should you so desire, and personally, I’ve never had an AEG from them that has been anything other than exemplary.

With the introduction of their ‘CXP’ models, they really hit on something quite unique, in the form of a thoroughly modern design with an Electronic Blowback function that not only looked great but performed superbly straight out of the box. It’s been my great pleasure to look at most of the variants of the CXP in their range, but they keep on coming through. ICS appear to have looked to the real firearms market and tracked the changes there; things in relation not only to the ‘AR/M4 platform, but to many iconic designs, have become lighter, more modular, and features have been updated to get the best performance possible from all parts.

Many smaller ‘AR’ manufacturers are going their own sweet way in terms of design, especially in relation to upper and lower receivers, rail systems, and stocks, and have completely changed the bar on what makes a good rifle; just looking at rails for instance, the Brigand Arms Carbon Fibre Handguard that launched at SHOT this year is LIGHT, weighing in at just 122g/4.3oz! For certain you’re not going to see many of these on airsoft replicas with a price-tag of US$296, but it shows a whole new direction for parts and accessories, especially for the sporting shooter.

With their more recent releases, ICS have followed that trend, not only designing their own metalwork, but also creating some fabulous designs for stocks, pistol grips and back-up ‘iron sights’, and the CXP range shows this completely; in my mind, they have some really super designs, which follow the trend away from out and out military models, instead following the creation of lightweight, slim-line, ergonomic rifles and carbines.

Inside good, outside outstanding!

Internally, the CXP HOG, which by the way stands for ‘High Occupancy Handguard’, series of AEG are all made from the same components and feature the aforementioned split gearbox, an Infinite 2500 long pin motor, and an M100 spring. They all also benefit from the ICS Electronic Blowback function, which is a nice nod towards realism, giving some kinetic energy feedback. Given the M100 spring, it’s recommended that you use nothing greater than a 7.4V LiPo, and dependant on the exact model you can have your CXP either front or rear wired; I’ll come back to this later.

With some solid internals, things get even better on the outside of the CXP models though, as the upper receiver looks like it really is CNC machined with some aggressive, dynamic lines. The fit to the lower is incredibly tight and precise with no gaps or wobble in evidence; at the rear of the upper is a really nice ambidextrous charging handle, which seems to have become a bit of a fixture on the CXP range too.

Up until now, the majority of the CXP range have made use of a beautifully achieved KeyMod rail system, which come with three short sections of rail, but in the two very latest suppressed models, the CXP-HOG Tubular SD SR, the CXP-HOG Tubular SD MTR, and two further models that do not feature the suppressor, ICS have taken things to a whole new level. The designers have obviously scoured the ‘tactical shooting’ world to look for the best out there, and the rail that appears on the new models reminds me very much of the original V-TAC tube system, designed by SGM Kyle Lamb (RET) and JP Enterprises.

The V-TAC design provided one of the first lightweight, well-ventilated rail designs for the AR, and rail sections could be added or removed to suit your needs. The free-float system also retained zero for any item mounted on the handguard. ICS have done a sterling job in coming up with something that closely replicates the older, but then revolutionary V-TAC design, and shaves weight off the replica.

Going to the rear of the CXP-HOG Tubular SD SR, on the model I had to test things get even more interesting. The CXP series can be either front or rear-wired depending on the exact model, but the ‘tubulars’ are all rearwired to avoid messing up that lovely, clean rail with a battery box. Two models have the MTR sliding stock, which ICS developed some time ago, but the SD SR has an all-new UKSR ‘sniper’ stock. Again, ICS appear to have looked to one of the ‘best in the business’, MAGPUL, and come up with a variation on the real-world PRS GEN3 stock; this is a field precision stock for AR platforms, featuring tool-less length of pull and cheekpiece height adjustment. In the case of the ICS version, it also offers battery storage via a quick-release buttplate.

Where ICS have been really clever with their stock though, is that it can be fitted to most airsoft AR/M4 models, as it uses the existing buffer tube to mate to; so, if you fancy something a bit special in relation to your stock, you can most certainly have it (a real PRS GEN3 stock will set you back the best part of US$255, even if you can get one and would then require precision fitting!) Other than that, the CXPs all feature a comfortable pistol grip of ICS design, along with their excellent flip-up front and rear sights, and an enlarged trigger guard; in the case of the SD models these come pre-fitted with a suppressor, which is part hidden inside the rail. The suppressor mates to a standard 14mm CCW thread, so you can easily change this out for a different barrel extension, making the system extremely versatile. The magazine is the T-Mag, which is their innovative 300 round high capacity model with the clear ‘windows’; this is really neat, as you can tell visually how many BBs you have left.

Now that I’ve tested a number of the CXP rifles and carbines, the smooth operation and performance of the CXP-HOG Tubular SD SR came as a little surprise to me. Loaded up with .20g NUPROL RZR BBs and with a NUPROL 7.4 LiPo fitted, it was time to take the rifle to the chrono, and again given the M100 spring fitted, it was no shock when it racked up a consistent and site-friendly 0.98-Joule/326fps. ICS install an M100 spring for the UK, instead of the M120 and use an Infinite 2500 motor instead of their Turbo 3000 motor; the reason for the spring change is to get the velocity below the UK legal limit, which of course right now is a bit of a ‘hot-potato’, and it’s encouraging to see manufacturers already working towards the new UK legislation on power limits.

Accuracy was again as I expected, that being excellent once the hop was securely set. Shots out to 30m were absolutely spot-on, with BBs ranging out to a good deal farther than that. ICS AEGs have never been slouches when it comes to accuracy, and the CXP line obviously follows that particular family tradition, and to me the ‘tubular’ just screams out for a bipod and short-dot optic. In the past, I would have suggested going back to an M120 spring, locking the AEG to semi and using it as a DMR, but as this is still legally a ‘grey area’ I’d have to advise that for now at least, you leave it as is; to be frank, all my personal DMRs and ‘trainers’ are locked away in the gun cabinets right now, until this situation is clarified.

You can pick up a CXP-HOG Tubular SD SR from Fire Support for just £399.00, and at this price ICS continue to give tremendous value for money; this is an AEG that you can rely on, whether it be at a Sunday skirmish or running a ‘tacticool’ course of fire, and once again, I believe that ICS are bang on trend. Now, if only they’d do a ‘recoil’ version…