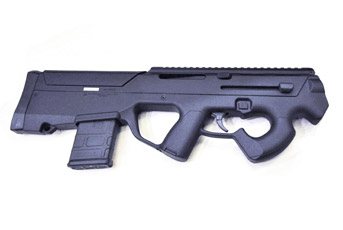 The PTS (Professional Training & Simulation) PDR™ offers a compact and potent AEG for those that require a low profile design.

In order to address the limitations of existing systems, Magpul Industries began development of the Personal Defense Rifle™ (PDR™) in 2006. This concept is envisioned as an ultra-compact, rifle-calibre personal defence weapon, catering for military officers, non-combat personnel, aircraft/survival E&E, executive protection and airline security. It is designed to fill the unique role between pistol and rifle, by combining the capabilities of the latest generation of PDW systems while greatly reducing any logistical burden.

It is small and thin enough to be carried close to the body via a shoulder holster but is deployable single handed even from a seated position making it ideal for use in vehicle cabs and tight spaces.

An ultra-compact bullpup-style design keeps the overall length to a minimum while still accommodating a highly effective 11.5 inch barrel.

For logistics reasons it was decided that the PDR™ would use PTS AEG PMAGs and AEG NATO standard USGI-style magazines. Backward compatibility with AEG AR-15/M16 magazines allows for emergency supplement from personnel carrying standard M16s of M4s. The PTS PDR AEG features the most current concept designs that have been envisioned for its real world counterpart.

The PTS PDR™ upper receiver is unique in housing all the fire control parts. This allows the user to switch in seconds to two different configurations of lower receivers, depending on mission requirements.

With an overall length of 18-20”, this AEG is designed for use in space restricted areas such as vehicles and aircraft. Also missions requiring concealment.  Features streamlined ‘no snag’ design, integrated forward grip and a shortened tail section. Made from reinforced polymer it features a Custom Hybrid Gearbox with 8mm Bearings. PMAG 20, 70X6mm BB Rounds short magazine (included) is compatible with all USGI-style magazines.

Instinctive M16-type magazine release allows for rapid magazine reloading not seen in other bull-pup designs in this class. The mag release is ambidextrous and ejection is reversible allowing selectable ejection system simulating ejecting spent casings from either the right or left side depending on user preference and tactical situation. An ambi charging handle simulates ejection port press check. The cheek piece rotates up to allow hop-up unit access and adjustment. A single point sling mount allows for use with a shoulder holster.