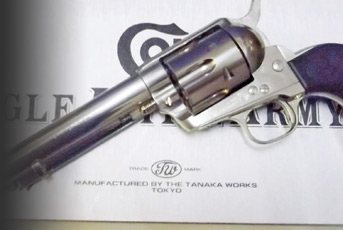 There are very few companies that dare to be different in Airsoft, because we players are - as a rule - a fairly conservative bunch that are happy with our M4 variants and TM pistols until we see something so classic, and yes, I’ll say it - beautiful – that we have to own it. One such thing is an airsoft version of a classic Colt revolver.

The Colt SAA revolver remains one of the essential symbols of America’s pioneering past and an important symbol of frontier law.

Long hailed as the gun of the West, revolvers have since evolved into some of the most dazzling collectors’ pieces in the marketplace. So is it any wonder that gun buffs who express their love via airsoft products have clamored for an accurate airsoft ‘six-shooter’ revolver as well?

What first started me off on this quest for the unusual was a chance spotting of a revolver in London’s newest airsoft store, Pro Airsoft Supplies. I was having a nice wander around checking out the kit when I chanced upon a glass fronted cabinet with all kinds of wonderful (and expensive) stuff in – revolvers, flintlocks, and everything that I never knew I wanted!

The one that really caught my eye was a Tanaka Colt SAA (Single Action Army) Cavalry model with 7 1\2” barrel, with Tanaka’s new “Jupiter” metal resin finish. You see I had just read a review on these specific guns and as a consequence knew that they were ridiculously hard to get hold of in this country, gorgeous, reliable and (almost) affordable if I was ever going to start a proper collection, rather than my mish-mash of guns that I had accumulated up until now.

After doing some research, I discovered a bit more about the Tanaka Colts which makes them even more special. It turns out that Tanaka use a whole different BB delivery system in the internals of their revolvers than any other manufacturer. With the Tanaka the revolver cylinder only looks like a cylinder, inside it is basically a whole self- contained gas and 6-shot BB magazine mid mounted onto the pistol – cool! Even the name of this mechanism oozes style - it’s called “the Pegasus System”.

As seen here, the Tanaka Colt SAA (Single Action Army) Cavaly model with 7 1\2” barrel, and the new “Jupiter” metal resin finish and black grips is priced at £399.99. This pistol measures 30.2cmin length, is 734g in weight and has a muzzle velocity of 250fps. A colour case hardened version of the same pistol but with wooden handle grips would cost around £449.99. Other Tanaka Colt pistols start from as little as £210.

A Western collection wouldn’t be complete without a lever-action rife, and for that, think Winchester!  Pro Airsoft Supplies stock an airsoft rife, but what really caught our attention was the shorter ‘chopped’ version – the Randall. This is an airsoft model of the shortened barrel and stock ‘mare’s leg’ Winchester used by Steve McQueen’s ‘Josh Randall’ bounty hunter character in the TV show that made him famous – “Wanted Dead or Alive”.  At just 63 centimeters overall length the Randall is basically a lever-action pistol, what’s more, it fits into Viper adjustable holster, so you can have this on your leg or even on your back (with Molle). This is a spring action model so no gas or batteries required; it comes complete with two 14 round magazines and has a muzzle velocity of 240fps. Price is £199.99.