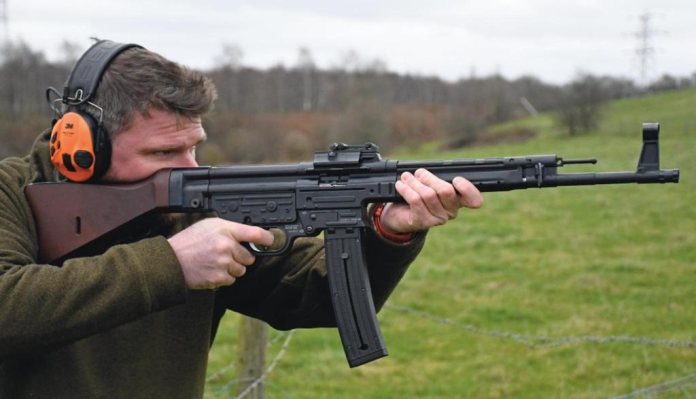 Was there such a thing as an ‘Assault Rifle’ before the Sturmgewehr 44, was it a truly pivotal rifle in both military and cultural history of our pastime? I think so, and regardless of its performance on targets in modern .22 semi-auto format, this was a rifle I have always wanted to investigate.

The muzzle has a slightly recessed crown on the 17.75” hammer-forged barrel. The rifle’s tall foresight is a sharp blade within a protective halo and the stepped profile of the barrel soon disappears into the frontal handguard. There’s a protruding extension that sits above the barrel and would have been the gas piston used to cycle the original action. There are further vestigial recesses and shapes to the stampings and mouldings of the forend in multiple materials, all finished with an almost indistinguishable greying/black patina from well-worn blued steel. The shape is delightfully hand-sized, easy to grasp securely and truly tactile in profile.

The rear sight is a notch to align with the foresight and shows windage adjustment as well as marked, tactile notches for extending ranges to ‘1000’. One must presume metres if somewhat hopefully on the original 7.92x33mm chambering, never mind a .22 rimfire, although you will surely appreciate the speed, assured return to position and extended shooting range they will enable on larger rimfire targets.

Below and to the right, a hinged dust cap protects the top of the magazine and breech area as well as the front of the reciprocating bolt within. This is pretty standard stuff for a 22-semi auto with twin extractor claws on the controlled feed face, which seems to easily cycle and enthusiastically spit rounds from the right side every time the trigger is squeezed.

Swapping to the left side, you can see the circular serrated mag release above the 25-round magazine. This is a snug fit in the well and needs a firm shove into position but will no doubt wear in a little, this was literally a ‘box fresh rifle’. Using a gentle draw to remove the magazine, it shows a lateral, thumb operable follower to ease spring tension when loading, as well as give some tactile identification of remaining contents.

The detail of the mouldings that complement the design factors stamped into the original steel rifles are wonderfully recreated, yet are radiused. They are never painful to encounter and carry such character.

Bolt operation is via a handle that’s positioned above the mag well, at the top of the rifle. Simply draw it back, before releasing to cock the action if not already primed. You can lock this upward in place too, in order to keep the bolt open and to show clear.

The trigger shows two stages. They are not particularly precise but certainly in character. The second stage break is not the crispest of encounters but realistic, breaking at 2340-grams.

Reach to the grip is generous at 85mm, so you get a really good hand position for consistent control and there is a 2-position lever safety on the lefthand side. A sprung cross pin holds on the rear/butt of the stock to the central action. With this slid off the action, the gun hinges open, paying careful attention to the internal springs and follower layout for detailed cleaning.

With a generous length of pull over 14.3”, it anchors perfectly into your shoulder, with what is effectively a low bore line, originally set to direct the multi-shot recoil impulse linearly into the shoulder with minimal muzzle flip. The cheekpiece remains high for ideal, and I mean utterly superb, head/eye/sight alignment for precision use that mocks most modern rifles. Plus, it’s certainly far superior, in my opinion, to the AK47’s.

The butt is beech with grooves at the curved rear for grip. There is no recoil here in a .22LR but all the same, one of the most naturally comfortable guns I have ever shot. There is a slight bump at the front of the comb but for low recoil cartridges, I doubt it’s ever likely to cause concern. The last features are the forward sling lanyard on the left side of the handguard and the rearmost slot to thread through.

How did it shoot? Well, it’s open sighted (old school) and totally down to the user but with subsonic ammo, managed an average of 1020 FPS. In use, it will reliably cycle ammo as long as you keep it clean. Photos captured some of the natural flickers of burning powder as the bolt was moving, just to remind you of the fundamentally dirty nature of semi-auto rimfire blowback actions.

Weight and overall dimensions are within millimetres of the original and although recoil is lower, what a superb fun gun. At 50m free-standing, 100mm groups were possible with a whole mag rattled onto freshly painted steel.

With all other factors aside, the one factor I cannot fail to concentrate on is the ergonomics of this gun. Regardless of recoil, the lower bore line coupled to a superb set of open sights and linear stock geometry still stand out today as not just a weapon of raw firepower, but a tool to complement the skill applied to its use. I have never had an open sighted rifle with such ideal head position and foresight detail exposed to the rear notch, nor the attention paid to elevation and windage control and the precision with which it can be applied on target. They knew what they were doing 80 years ago and yes, I’m sure in the larger centrefire chamberings, the bump between action and stock may have bitten the cheek of a few young recruits, but it is key to just how well this gun mounts up and points. This isn’t one of the most accurate or best guns in the world, but it’s one of the most emotive and striking examples of timeless perfection I have ever seen in ethos alone. I’m left with one thought, I want to try an original. Perhaps it’s not the AK47 masterpiece of cheap mass production and international stardom that followed in its wake, but definitely a hall of famer. It has been emotional.